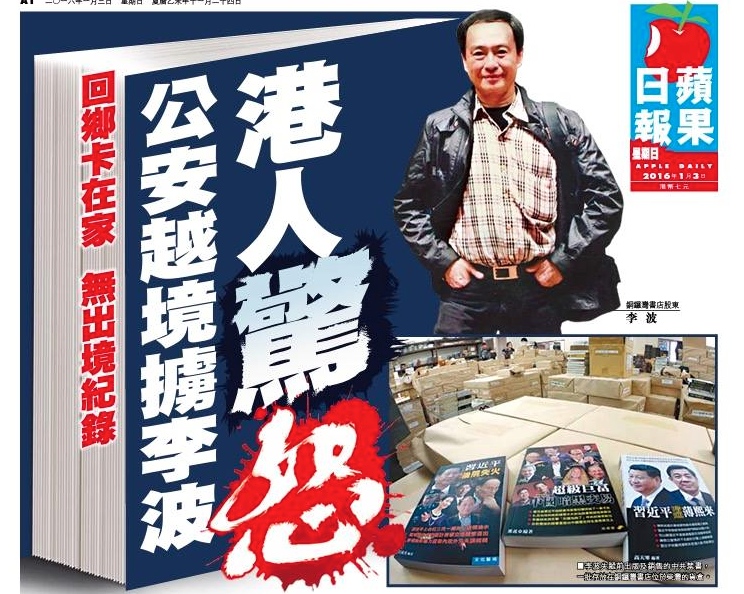 2016 brought a dose of chilling news to Hong Kong after yet another local bookseller was believed kidnapped by mainland Chinese secret police.

Lee Bo, who disappeared December 30 is the fifth bookseller from Causeway Bay Bookstore that specialised in publishing and selling literature banned in China to disappear unexplained.

Four other colleagues from the same bookstore disappeared from their residences in Shenzhen and Thailand respectively in October.

In November, Lee Bo himself had told BBC News that his colleagues were detained by the Chinese authorities because of their publishing work.

Among the four is Gui Minhai, a China-born Swedish national and the owner of the publishing house which owns the bookstore.

Gui disappeared from his holiday home in Thailand around mid-October while he was working on a book detailing Chinese President Xi Jinping's private life.

At around 10:30pm on December 30, Mr Lee's wife received a phone call from her husband who spoke in Putonghua instead of his native Cantonese.

Lee told her he was assisting in an investigation and he would not return home for a period of time.

As indicated in the phone record, the call was made from Shenzhen and his wife later found out that Lee's “homecoming card” — a travel document for entering mainland China was still at home — meaning he could not have left Hong Kong through proper immigration channels.

The Hong Kong authorities later also confirmed that Mr. Lee did not have any record of having exited the island.

Mr. Lee's wife told local press that her husband was lured by a fake book order call and went to the warehouse to collect the books.

He went missing after he left with a dozen books. The public believes that Lee was forcibly taken by mainland Chinese authorities from Hong Kong to Shenzhen.

Under the One Country Two Systems arrangement, Hong Kong enjoys judicial independence and Chinese authorities do not have jurisdiction to operate there without prior approval.

If Mr. Lee was indeed kidnapped by mainland Chinese secret police, the judicial independence of the city may have been compromised.

I am terrified, because this case has proven that nothing can protect my personal safety even if I have not broken any law. Hong Kong residents can be taken away by non-local law enforcers and the government will not protect you. It will neither protect you in action, nor in words by saying “We won't allow any unauthorized overseas law enforcers to operate in Hong Kong.”

I am angry because these five Hong Kong residents are just ordinary people like you and me. They have not broken any law but their rights have not been protected. If you think selling banned books are “special cases” or people selling banned books should be taken away, I can only say “F**k you, why don't you move to your beloved mainland China.”

I feel helpless because apart from expressing my anger on Facebook, I can't do anything. I don't know who should I ask for help or to whom to file the complaint. To God? Making random calls? To the White House? Or just continue to live a normal life and pretend nothing happened?

I feel anxious because I may end up the next one taken away. Who would have thought selling banned books could end up with you being kidnapped to mainland China? Who knows if cursing the Chinese Communist Party can also cause that? It is technically possible to locate people's IP addresses. Every one of you may end up being taken away. And some of you may just be vaporized without anyone knowing that you have been taken away.

Since 2014, the mainland Chinese authorities have been cracking down on publishers of banned books in Hong Kong.

In May 2014, a Hong Kong publisher Yao Wentian was sentenced to 10 years for smuggling. His publishing house was about to release a dissident-authored title focused on Chinese President Xi Jinping.

As it is likely that all the missing five booksellers are now held in mainland China, the Hong Kong Journalist Association and the Independent Writer Association wrote to the Liaison Office of the Central Government demanding a full explanation: