‘The Dress’ Is Back, But This Time It's A Debate About Censorship on Russian TV 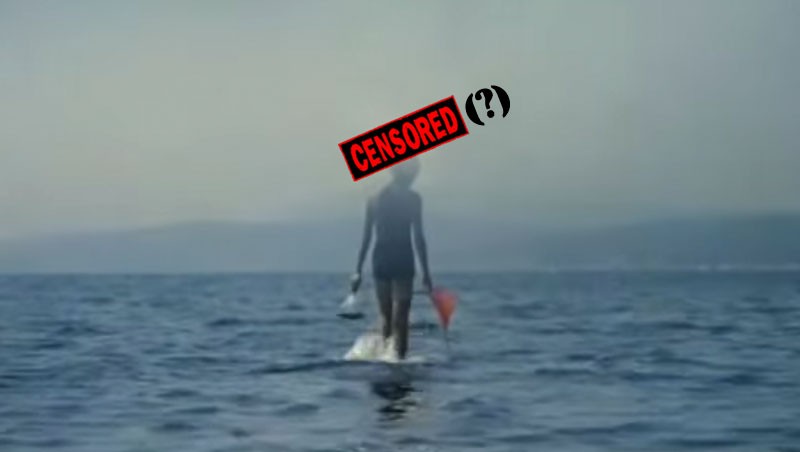 The disputed moment in The Diamond Arm. Image edited by Kevin Rothrock.

“The Dress” is back. Whether you call it Dressgate, #thedress, or something else—the viral photo meme has returned. Only this time, it’s not a dress. It’s also not a question of color perception, but a matter of seeing (or not seeing) a halo in a movie still. The film in question is The Diamond Arm, the 1969 Soviet comedy classic that has aired countless times on Russian television.

On New Year’s Eve, the national TV network Rossiya-1 was the latest to broadcast the movie, but this time many viewers noticed that the halo appearing over a boy's head in a well-known scene seems to have been mysteriously washed out, obscuring the religious symbol, apparently in an effort to censor a blasphemous joke.

In the scene, actor Andrei Mironov’s character is marooned on a small island in the Black Sea. Panicking, he begins to call for help, when suddenly he sees a boy who appears to be walking on the water. Mironov’s character mistakes the boy for Christ, imagining a halo above his head. (When he discovers that the child is walking atop a wooden plank just below the waterline, he rushes past him, knocking the boy into the sea.)

On January 1, Rossiya-1 showed the film once again, leading to an unresolved debate among Twitter users about whether the station edited the movie to obscure the halo.

The halo in The Diamond Arm is the new “blue dress.” Check out the new screencaps from the broadcast on January 1.

Later in the day on January 1, Victoria Arutiunova, the press secretary for VGTRK, which operates Rossiya-1, went on the radio to deny claims that the network censored The Diamond Arm, warning that “careful viewers should consider drinking less and eating more on New Year’s Eve.”

Even if Rossiya-1 did edit The Diamond Arm, it wouldn’t be the movie's first brush with censorship. When it was filmed in 1968, the comedy contained remarkably risque humor for its day, including a drunk protagonist, a hotel scene featuring a halfnaked woman, and much more.

Director Leonid Gaidai, according to his widow, specifically added an extraneous scene of a nuclear explosion to the movie’s ending, just so he could later “reluctantly” allow government censors to remove it, while preserving the rest of the movie. According to the director’s widow, “While they worked to persuade Gaidai to remove this scene, which really had nothing to do with the film, [the censors] completely forgot about their objections to all the other parts.”

In June 2013, Vladimir Putin signed into law new criminal penalties for insulting people’s religious sentiments. According to the legislation, expressing disrespect for religious feelings can in certain circumstances result in a three-year prison sentence.