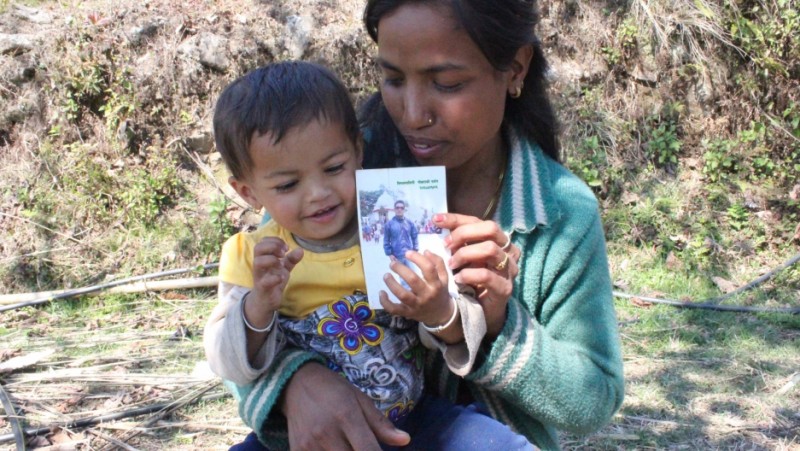 This article by Laura Spero [1] for The World [2] originally appeared on PRI.org [3] on December 28, 2015, and is republished here as part of a content-sharing agreement.

Bishnu Pande is 21, with a soft, low voice like a cello.

As we talk in the garden near her house, her 18-month-old daughter Ayusha is playing nearby. Bishnu is telling me how she met Ayusha's father. Their story is emblematic of so many changes that are rippling through this traditional culture.

Three years ago, Bishnu was in 11th grade when she texted a wrong number, and a boy in a village about a day away answered. His name was Dirgaraj. They started corresponding.

“I got more interested in love than school,” she giggles.

One day, she says, he asked to call her his girlfriend. She told him she had to think about it.

“But then,” she says, “I thought: once in your life, you have to fall for someone. So whatever it's about, I should do it.”

She lets out a sigh. “Who knows? Just like that, I was in love.”

Bishnu's father had died when she was 11, and her mother was abroad by the time she was 16. So when her aunt began arranging her marriage, she called Dirgaraj.

“If he had hesitated, or said something else, I wouldn't have gone,” Bishnu says. “But he just said, directly: ‘Come.’ He said, “I have money. We'll pay [for the bus ticket] when you get here.”

Every astrologer she'd ever visited had advised her, “Don't marry until you're 30.”

But she took a bus to meet him, and a few days later, they were married.

After about a year though, Dirgaraj became restless to earn a better income, and, like hundreds of thousands of other young Nepali men, he made a decision.

“One day while I was out of the house, he began making arrangements to go work overseas. I hid his passport and begged him not to go. I told him I wouldn't call or talk to him. But he just said, “If I go, you'll cry for a second and then you'll stop worrying. Anyway, you can't stop me.

“It's only two years,” Bishnu remembers him saying. “In two years, no matter where we go, we'll be together.

Dirgaraj left to work as a security guard in Qatar just one month before his daughter Ayusha was born.

Seven months later, Bishnu was on a bus when she overheard something. A young man from their village had died in Qatar. He'd had a heart attack. He had a baby girl.

It was Dirgaraj. And just like that, at the age of 20, Bishnu was a widow.

Widowed women are not supposed to remarry or move out of their in-laws homes. They do not wear the color red, or eat meat, or attend celebrations; in the most conservative places, widows are considered so inauspicious that people clear away from them in the road.  What’s more, women have historically faced discriminatory legal obstacles, such as being required to get permission from male family members to obtain passports, or inheritances, or land.

But as more women become educated, and as more young men leave young wives behind to go work overseas, these practices are changing.

Lily Thapa is the founder of Women for Human Rights, an organization that's been advocating on behalf of single women in Nepal for 20 years. Ten years ago, she helped found the Red Color Movement, which aims to shift the tradition that widows don't wear red. To put this custom in context, it isn't easy to find traditional female clothing that isn't red. Women marry in red, celebrate in red, apply bright red sindur powder to their foreheads daily. To abstain from the color red, Lily tells me, is to abstain from beauty and celebration.

I visit Bishnu on the one-year anniversary of her husband's death. The house is filled with visitors and ritual offerings. But the detail that captures my attention is Bishnu's red sandals. This sliver of color under her feet says volumes about her future.

And is a break from her past — and how her mother wore widowhood.

“If there's even a speck of red on something my mother won't wear it,” she recalls of her widowed mother.

The small detail shows that Bishnu is — and isn't — reliving her mother's fate.

We flip through some old photo albums, off to the side of the house. Dirgaraj's mother still can't bear to look at them. Dirgaraj is a striking young man with muscled shoulders, strong high cheekbones, and unusual faded green eyes like his father's. Here he is in a sleeveless shirt with the hills behind him; here at their wedding. They look so young, because they were.

As Bishnu takes me through these albums, I see her negotiating the boundary between customary ritual and modern womanhood. Indeed, there many mourning traditions that she's chosen to observe. She doesn't wear bangles on her wrists or put bright red sindur powder in her hair. And she's stayed here with her in-laws for a year to honor the loss of her beloved.

But with today's anniversary behind her, she's preparing to leave.

“Nobody's going to say, ‘Hey, you need some money,'” she points out. “I have to do whatever I'm capable of in life, and stand up on my own two feet. There's nothing more important than that.”

Bishnu is really clear, however, that looking after herself doesn't mean abandoning her in-laws. It's important for her to make sure they are cared for — she is still a daughter-in-law.

But her tone turns defiant when she says that doesn't help any of them for her to languish here, doing nothing with her life. One customary obligation no longer serves the other, as it were.

And these days, people understand that. “If my in-laws had said, ‘You have to stay here! Take care of us!’ there's nothing I could have done about it. But they tell me, ‘Do whatever makes you happy…just bring our granddaughter to see us.'”

The community has reflected these sentiments. Nobody really expects Bishnu to throw away her life as a traditional, beholden widow.

Then again, nobody expects life to be the same as it was, either. As Bishnu builds an independent future for herself, she will continue to draw on her cultural heritage to grieve her loss. Publicly.

“I can't imagine leaving and going with another,” she says. “No matter where I go, if I search the whole globe — I'll never find a man like this one.” Everything about him was good. Sometimes he acted like a playful child, sometimes he was a friend; sometimes he was like those little old people who walk with a stick. He never created any suffering. But now, it's always pain.

“As of today…today is the beginning of a new life for me.”

When I contacted Bishnu eight months later, she was resettled in the village where she was born.

She's planning for her future, just as she was four years ago, that day she texted a wrong number. But now she's not wearing bangles. And maybe she never will.