Politician Invites TV Cameras to Film Him Buying a Russian Car. They Also Filmed His Watch, Which Is Worth More Than the Car. 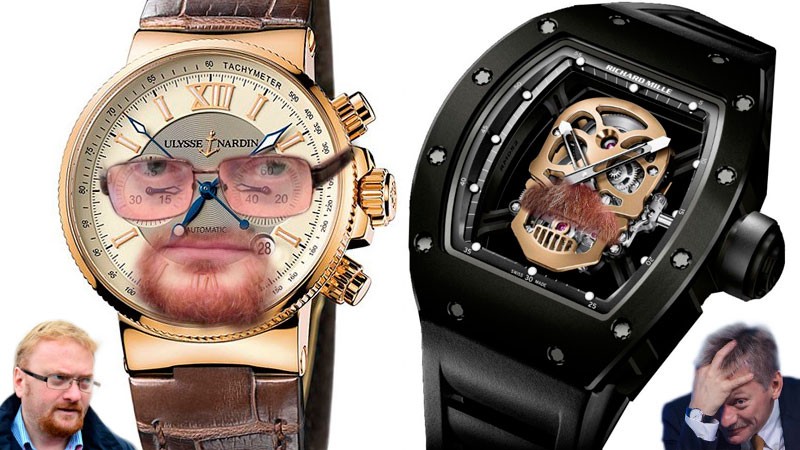 When St. Petersburg city councilman Vitaly Milonov brought along a television crew to film him buying a Russian-made car, he probably didn’t expect his wristwatch to be the story. And yet that is precisely what happened, mainly because his timepiece appears to be a Maxi Marine Chronograph (worth between $8,500 and $12,000, depending on the exact model). Meanwhile, the car Milonov bought—a Lada Vesta—cost just $9,000 (658,000 rubles). In other words, his watch might be worth more than his new car, the purchase of which he staged for the public, as a patriotic gesture of support for Russia’s struggling economy.

Milonov put down half the money for the car and agreed to make monthly payments for the next three years to settle the balance. According to the news agency LifeNews, Milonov earned almost 3.5 million rubles ($48,000, by today’s exchange rate) in 2014. His assets included a small plot of land, a 12,000-square-foot apartment, and another property then under construction.

Dmitry Sukharev, a member of the Anti-Corruption Foundation (a transparency group), was one of the first to draw attention to Milonov’s watch, tweeting on December 30 that the timepiece is now worth more than 1 million rubles, thanks to the depreciation of Russia’s currency. A Twitter account unofficially representing Milonov soon responded, denying the information and calling Sukharev a “fiction-monger.”

Ooh. Milonov bought himself a none-too-cheap watch. Thanks to the ruble's fall, the the watch is now worth more than a million [rubles].

This is not the first time the public has noticed Milonov’s expensive wristwear. In January 2013, Danill Gumin wondered on Twitter if Milonov owned a Patek Philippe (which retail for as much as $990,000). On April 3, 2015, Andrey Zakharov posted a screencap from a YouTube video, showing Milonov with the Maxi Marine Chronograph he also appeared to be wearing when he bought his Lada Vesta this week.

Accompanying Milonov’s body to the car dealership was a jacket featuring two so-called Baklanovsky crosses (one on the front and one on the back). The symbol includes the final lines of the Nicene-Constantinopolitan Creed: “I look for the Resurrection of the dead, And the Life of the age to come. Amen.” The phrase on Milonov’s coat appears alongside a skull and crossbones—a combination popularized by Russian General Yakov Baklanov’s Cossack regiment in 1850. Today, the image appeals to some in the Russian Orthodox community, where it’s found on swag like t-shirts and hats.

The Anti-Corruption Foundation regularly publishes evidence of the political elite’s extravagant lifestyles. In August 2015, the group made international headlines when it exposed the wristwatch of Dmitry Peskov, Vladimir Putin’s spokesman, which it estimated to be worth at least $625,000.