For Southeast Asia, 2015 Was a Year of Corruption Scandals 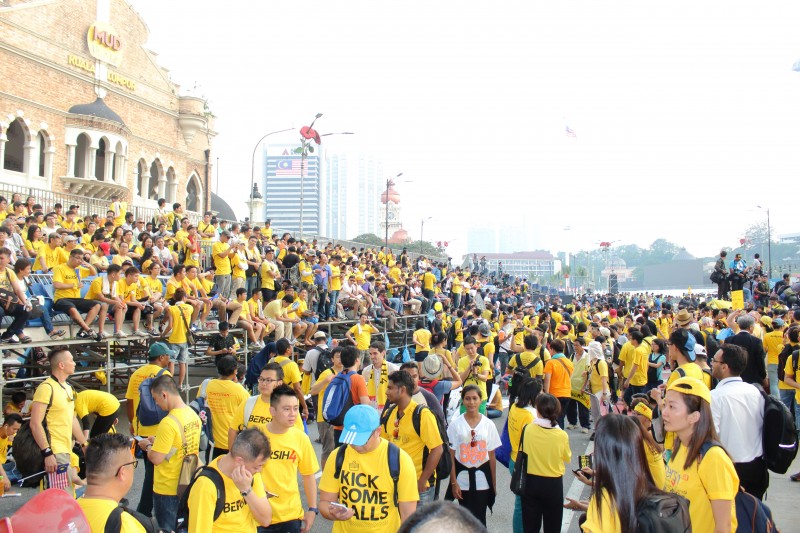 The Bersih (change) rally in Malaysia gathered more than 100,000 people, the biggest political demonstration in Southeast Asia in 2015. The protesters were demanding the resignation of the Malaysian prime minister who was being implicated in a corruption scandal. Photo by Emran Mohd Tamil, Copyright @Demotix (8/29/2015)

Three issues grabbed the headlines in Southeast Asia in 2015, namely, the historic electoral defeat of the military-backed party in Myanmar, the Indonesian haze caused by forest fires, and the corruption scandals involving leaders of the ruling parties.

In Malaysia, the prime minister is accused of pocketing more than 600 million US dollars from anomalous bank transactions involving the country’s state-run investment firm. In Thailand, the junta which grabbed power in 2014 is facing allegation that it built a graft-ridden park. In Indonesia, the House speaker resigned his post after he was implicated in an extortion scandal. And in the Philippines, the vice president is hounded by plunder charges.

Malaysian Prime Minister Najib Abdul Razak admitted that he has 600 million dollars in his bank but denied that the funds came from state coffers. He claimed that a supporter from the Middle East donated the money for the election campaign of the ruling party. Many doubted his explanation and called for his resignation. The issue generated funny Internet memes mocking the prime minister while large protests were organized across the country.

The Wall Street Journal published an investigative piece on the questionable bank transfers involving the prime minister and 1MDB, the state-owned investment firm:

In Thailand, the junta’s anti-corruption pledge became less credible after allegations surfaced that large kickbacks were demanded for the construction of the Rajabhakti Park in Prachuap Khiri Khan Province. The junta commissioned the construction of the park featuring seven giant statues of popular kings in honor of the monarchy. An army general acknowledged the anomaly which led to a formal investigation although government spokespersons denied that the park is overpriced. Last month, the junta ordered the indefinite closure of the park to prevent protesters from staging political actions in the area. Meanwhile, Facebook users who shared and liked infographics about the park scandal were charged for insulting the monarchy, a crime that can result to several years of incarceration.

In Indonesia, House Speaker Setya Novanto is accused of asking for a 20 percent stake in the Freeport mining worth 4 billion US dollars in exchange of a contract allowing the company to continue operating in the country. An audio recording between Novanto and Freeport executives was presented as evidence against the politician. Novanto admitted that he made the demand but insisted that he was only joking. He was being investigated for ethics violation when he stepped down as House speaker last December 16. Novanto’s behavior was widely condemned in Indonesia.

Novanto is no stranger to controversy. Last September, he was criticized for appearing at the political rally of United States presidential candidate Donald Trump

Donald Trump: Do they like me in Indonesia? Setya Novanto: Yes, highly Fadli Zon: [Trump]'s a friend of Indonesia http://t.co/xozyL572hc

In the Philippines, Vice President Jejomar Binay is facing several corruption charges in connection to alleged anomalous contracts he signed when he was still mayor of Makati City, the country’s financial center. Binay, one of the frontrunners in the 2016 presidential election, described the corruption cases as politically-motivated. He questioned the string of cases filed against him, which he said was made to disqualify him as a candidate in the election.

Here's one of the many Internet memes alluding to Vice President Binay's corruption cases:

2015 will be remembered as the year when Myanmar voted for change. But elsewhere in the Southeast Asian region, it’s politics as usual for politicians who are accused of abusing their power for personal gain.