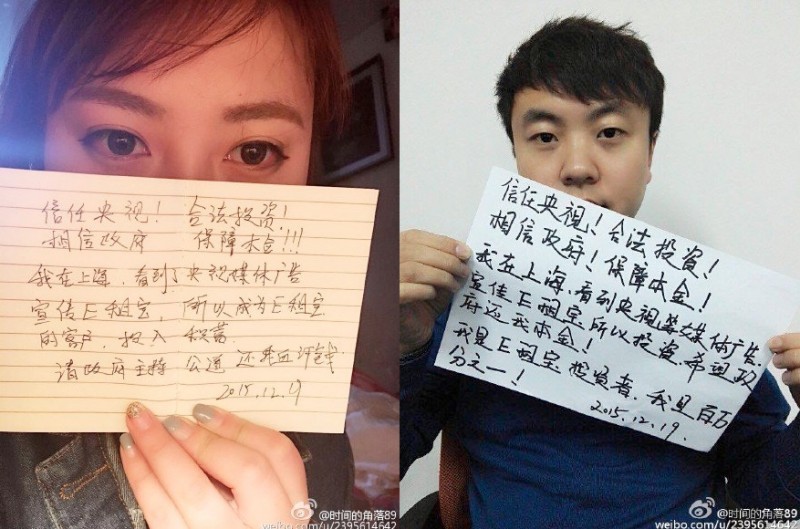 Online lending platform Ezubao's investors uploaded protest photos to Weibo. The placards say: “We trusted China Central Television and have engaged in legal investments. We trusted the government and the deposit should be protected. I live in Shanghai and watched Ezubao's ads on CCTV. That's why I made the investment decision. I hope the government will return my deposit. I am an investor from Ezubao and I am just one of the one million. December 19, 2015.” Image from Weibo.

Similar to the spread of toxic smog, the protests against finance “scams” on peer-to-peer (P2P) lending platforms have been sweeping across China over the last month.

P2P lending platforms, also known as crowdlending, attract individual and business investors with promises of high rates of return. According to an industrial insider's report, by November 2015 there were about 3,769 P2P lending sites, but 1,157 of these sites were “problematic” involving fraudulent investments.

One of the problematic sites under investigation is Ezubao, the biggest online finance firm in China which has built its reputation through a series of ads on state-run China Central Television (CCTV). The site attracted more than 74 billion yuan (approximately US$11.5 billion) from about one million small investors in a span of 18 months. Since authorities raided the site's office on December 8, there have been no reports on the investigation and the investors have yet to find out the whereabouts of the money they handed over.

Since December 9, tens of thousands of small investors from Ezubao have gathered outside the company's offices in various provinces demanding the return of their investments. On December 19, hundreds of investors protested outside the Beijing World Trade Center and some were arrested by police. On December 22, protesters then demonstrated outside the headquarters of CCTV for their misleading television ads that lured people to invest their savings in Ezubao.

However, news of the protests went unreported on mainstream media outlets and censored on social media platforms, as pointed out by user Gushequ on Chinese Twitter-like Weibo:

A number of big online finance platforms, including Fanya, Ezubao, Dada, MMM…, which had attracted tens of billions of investments, have exploded… Many believe the incidents have little impact. Well, the public cannot see the impact. [The protesters] were displaying banners outside CCTV headquarters the other day and many mass protests had taken place across the country. In a WeChat group, videos of people's desperate cries were circulating around, but Weibo has filtered their voices. That's why people have the impression that [the authorities] have handled the explosion well and the situation has been stabilized.

Apart from media censorship, the police received instructions to contain the national protests over Christmas. @hailu-1121 posted the instruction on Twitter:

Protests of Ezubao's investors reportedly broken out in at least seven provinces and 34 cities all across the country during Christmas, but their demands that investigation reports be made public and they receive a return of their deposit remain unanswered. 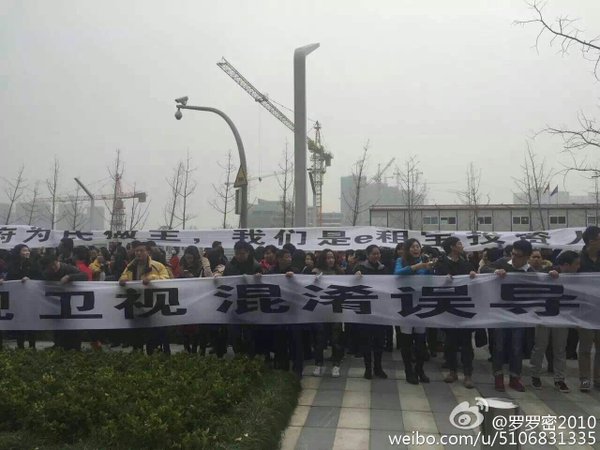 Online lending has become the country's third major investment tool. The crowdlending platforms attract small investors with interest rates as high as 10-20%, but the lending businesses’ bad debt rate is also as high as 30%. It was only a matter of time before the sector exploded in some way.

Why would the government allow such an operation to exist in the first place? A business insider explained the economic policy and political motivation behind the blooming of China's online finance business:

The pressure of an economic downturn is huge and even big corporations cannot make money. Conventional business faces overproduction pressure while emerging business has not worked out a sustainable model. Everyone needs money. But if the banks were to lend all this money, the bad debt rate would be huge. The banks are directly affiliated with the government and they cannot fall. The government doesn't want the banks to take up so much bad debt. That's why the banks refuse to lend money to these clients. However, if these businesses do not have cash flow, they would be bankrupt and high unemployment would follow. The government doesn't want to see people protesting. The only way out is to let ordinary people lend money to low credit businesses and individuals. In this way, the banks do not need to take up the bad debt, withering businesses manage to survive, the risk goes to the investors. Well, since you support Internet innovation, this is the price. And this is a [patriotic act] of “taking up the country's risk”? Do you really want to do so? Obviously not. But once the banks lower their interest rates, you certainly put your money on the high-interest platforms.

‘It is too late to talk about this’

On December 28, Chinese authorities released the draft of a new regulation on P2P lending, which would require the online finance platform to leave investors’ money in the custody of banking institutions and to set upper limits on each deal and on a borrower's total outstanding loans.

The new regulation seems to suggest that the problematic P2P lending sites have been operating illegally all these years. Yet, it has been the government's policy to encourage loan services to small businesses. Many netizens, in particular the victims of online financial scams, have criticized the new policy for shrouding the responsibility of the regulator.

On Chinese Twitter-like Weibo, the outrage are was palpable in the comment section of the news thread:

It is too late to talk about this. Why not comment on Ezubao? It had ads on the doors of government offices [meaning government-affiliated media outlets], and now you tell me all these platforms are illegal.

TV spots broadcast at the peak hours of CCTV, the government's major mouthpiece, ad posters stuck on trains. All these ads have to be approved by the government. Don't make this an international joke. We choose to invest in the online lending services because we believe in the party and the government !!!

Please release a transparent and public investigation report on all these online investment companies. We need to hear from the government.

Now playing smart [after making all the mistakes] and what about us — tens of thousands families? We're to be scattered to the wind? What have you been working on? Do you even have credibility? How can we feel safe again? How can society be stable? Does Uncle Xi [Jinping, president of China] know that we are suffering???