What to Expect From Russia's State Censor in 2016 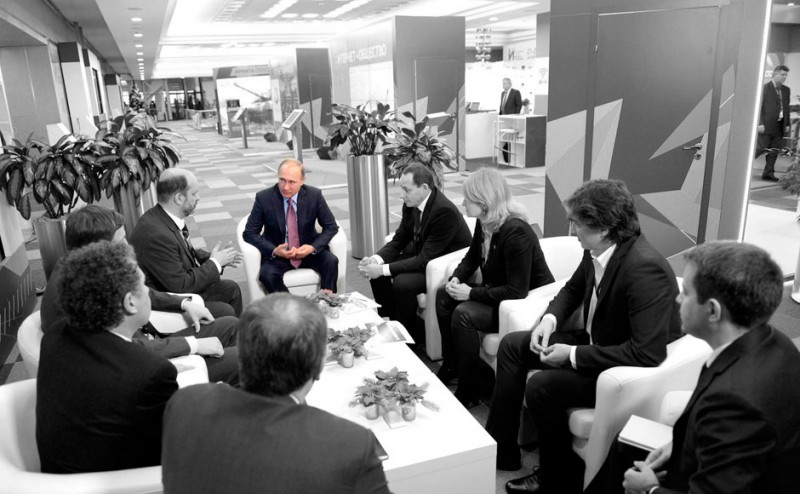 Alexander Zharov isn’t often credited with being one of Russia’s most powerful state officials, and yet he is the head of Roskomnadzor, the government agency tasked with regulating and censoring the media (including the Internet). In the past, Zharov’s own deputy, Maxim Ksenzov, has outshined him publicly, making headlines for various controversial claims and threats, such as a remark in May 2014, when Ksenzov said regulators could block Twitter or Facebook “in a matter of minutes.”

On December 25, however, Ksenzov informally announced that he will be resigning from his post in early January. Four days later, Zharov stepped into the spotlight, granting a long interview to the news website Gazeta.ru, giving Russians a taste of what they can expect from their Internet censor in 2016.

The interview is extensive. Zharov touches on Roskomnadzor’s friction with Wikipedia (which has resisted the Russian government’s efforts to censor articles about illegal drugs), Internet anonymizers, reporting the words “ISIL” and “Daesh,” and the appointment of German Klimenko, Vladimir Putin’s new Internet advisor. Below, RuNet Echo summarizes the three issues Zharov discussed with Gazeta.ru in the greatest depth: weighing the normalcy of Russia’s media censorship, measuring the success of Russian censorship, and regulating Russia’s mobile-messenger market.

Asked why Russia finds it necessary to regulate its media so harshly, Zharov first deflected, saying that questions about the purpose of regulations should be addressed to Russian lawmakers, given that Roskomnadzor is only the enforcer.

Zharov is clearly no opponent of these regulations, however, and he went on to justify the state’s restrictions on the media, saying, “Our laws are fairly liberal, when compared to other countries and the powers they grant to their watchdog agencies, regarding the removal of materials from the media, for example, during broadcasts.” When Gazeta.ru asked him for an example of “laws harsher” than Russia’s in “at least one civilized country,” Zharov turned to the United States:

When one of the cable channels in New York started showing the film “08-08-08” about Georgia’s attack on South Ossetia and Abkhazia, about 30 minutes into the broadcast an FBI agent arrived at the studio, flashed his badge, confiscated the data storage device, and left. People watching at the time were suddenly left with a black screen. We know that the police powers of the FBI in the United States are limitless. Can you imagine if an inspector from Roskomnadzor were to enter a TV station and stopped the broadcast? I cannot.

It’s unclear what episode Zharov has in mind, though his description of an American telecast containing pro-Russian content vaguely recalls a Fox News broadcast on August 13, 2008, when a witness to the war in South Ossetia was cut off for commercials. (Russian TV networks highlighted the incident as an example of censorship, though Fox News did allow the woman back on the air to continue her criticism of then Georgian President Mikheil Saakashvili, after the commercial break.) The Russian film “WAR 08.08.08. The Art of Betrayal” is available on YouTube, where it has more than 1.3 million views.

Russian law bans the dissemination of information that assists or propagates the use of illegal drugs. Spreading similar information about suicide is also prohibited.

When asked about Internet regulations’ impact on drug use, Zharov refused to discuss the efficacy of Roskomnadzor’s censorship efforts. “I’m not acquainted with the statistics on drug use. For that, you need to ask the Federal Drug Control Service,” he told Gazeta.ru. He explained that his job is merely to put up barriers to keep young people away from drugs, though he admitted that dedicated individuals will always find ways to circumvent restrictions.

About other, less damning statistics, however, Zharov was ready to talk. Asked about Roskomnadzor’s campaign to block content propagating suicide, Zharov said, “In the first nine months of 2015, according to data from Rosstat, the number of suicides during the same period in 2014 dropped by seven percent, or 1,700 lives.” Clearly proud of this shift, he told Gazeta.ru, “The trend is stable. These are lives saved.”

In March 2015, Roskomnadzor forced the Russian Orthodox website Pravoslavie i Mir to redact an article about a cancer patient killing himself because he was tired of fighting his disease. Censors told the website that it is illegal to disclose the reasons behind a suicide in a news report.

In his interview with Gazeta.ru, Zharov said that it is acceptable to write about terminally ill people killing themselves, but he still insists on restrictions:

We should write about everything. The question is one of context. I think it’s unnecessary to describe in detail the method of suicide. Because hundreds of people—maybe thousands—might be in a similar situation. For some of them, the article could push them over the edge. You can’t stop all kinds of pain, even with the proper care. And a person in such conditions might say, ‘Yes. This is a way out.’

Zharov also took pains to emphasize that Roskomnadzor has never issued an official warning to a media outlet about a report concerning suicide, saying that the agency’s communications with publications have been informal. “We’re not pommeling anyone over the head,” he explained. (The incident with Pravoslavie i Mir was resolved before a formal warning was ever issued.)

Earlier in December, Vladimir Putin’s new Internet advisor, German Klimenko, said that the messenger app Telegram “will either cooperate [with Russian officials] or be shut down.” Telegram is the brainchild of Pavel Durov, who also created Vkontakte, Russia’s most popular social network. He left Russia a year ago, after being forced out by business interests widely considered to be loyal to the Kremlin. In the past, Durov has sparred publicly with Russian officials, often presenting himself as a lone warrior against the police. 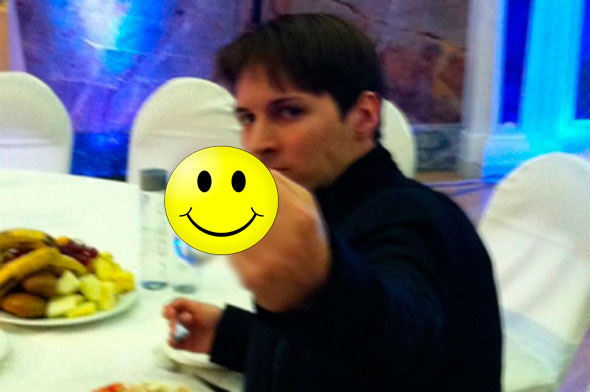 Pavel Durov flips the bird to investors he accused of trying to crowd him out from Vkontakte. July 22, 2011. His attitude toward Russian censors seems to be much the same today.

Zharov says he stopped using Telegram after December 19, 2015, when Edward Snowden criticized the app’s default privacy settings as “dangerous.” Zharov also expressed dismay about Durov’s promise never to bow to Russian censors. Zharov then accused Vkontakte of being an “absolute pirate resource” until Durov left the company. Asked about blocking Telegram in Russia, Zharov threatened that the messenger risks losing users to unblocked services, just as WhatsApp users migrated to Telegram, when a Brazilian court briefly blocked WhatsApp in mid-December.

Zharov also criticized messengers broadly, saying that they take revenue from telecoms and provide cover to terrorists and spammers. He advocated “agreements” with Internet providers, in order to establish messengers’ “identity”:

No one is saying that we need to block messengers. There was a proposal to bring them into a more legitimate field, meaning that, if you, dear messenger apps, are working on the networks of our Internet providers, you need to reach an agreement with the provider, so you can at least be identified. Let’s say—God forbid—there’s a terrorist attack and the terrorists are using a certain means of communication.

According to Zharov, agreements between messenger apps and network providers are necessary in order to add the apps to the System for Operative Investigative Activities (SORM), which Russian police use to monitor the Internet, among other things.

Roskomnadzor’s chief blamed a lack of proper regulations for false rumors circulating on social networks on November 10, 2015, claiming that 18 suicide bombers were attacking the city of Kazan. (According to the news agency RBC, the false reports were actually spread using SMS.)

Zharov also faulted messengers for crashing Russia’s SMS industry, saying that apps like Telegram and WhatsApp have deprived the country’s four biggest telecoms of as much as 20 million rubles ($275,000), or 25 percent of their total text-messaging profits. This evaporation of commerce isn’t necessarily good news for consumers, he argued, saying that all apps have to monetize eventually, putting users at risk of unregulated spam.

A sword and shield or a ball and chain?

Zharov told Gazeta.ru that Russia keeps adding new media regulations because the country is catching up to the media revolution, which has produced an explosion of user-generated content that now competes against traditional journalism.

While Internet users are producing more news and entertainment now than ever before, formal news organizations still bear the brunt of Russian censorship. In its final question, Gazeta.ru asked Zharov how news outlets, saddled by these restrictions, are supposed to challenge the newcomers.

Zharov told journalists that they’ve nothing to fear, if only they follow the rules:

Listen, guys. I think that, if you don’t propagate extremism, don’t swear, don’t write about how great drugs are or how beautiful suicide is, and don’t stick child pornography in your stories, then Roskomnadzor won’t punish you for anything more.