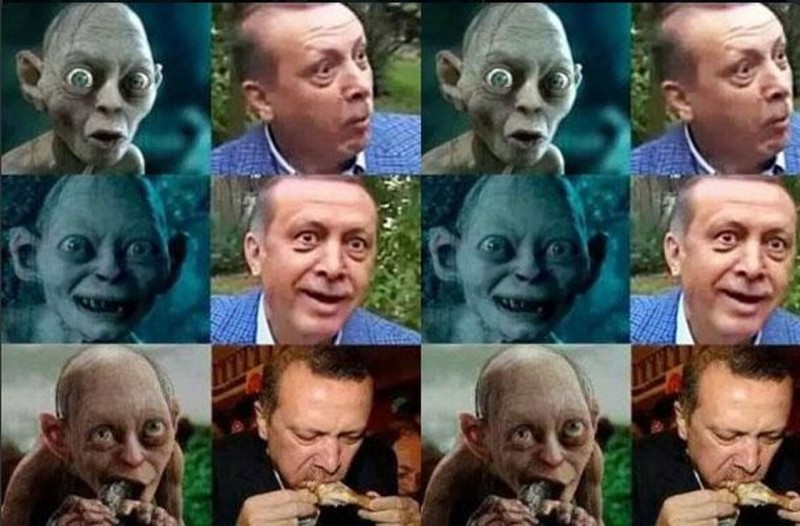 With a 47-year-old Turkish doctor facing jail time for comparing one of the most powerful political leaders on Middle Earth to the Lord of the Rings character Gollum, demand grew for Elijah Wood to intervene.

That Bilgin Ciftci faces jail time for comparing Erdogan to Gollum/Smeagol, regardless of wether he's good or bad, is horrifying.

But did Wood have any idea of the Twitter forces his response would release?

The fact that a social media meme comparing Recep Tayyip Erdoğan to Gollum could be an imprisonable offence says much about the descent of Turkish politics into the realm of insanity over the last two or so years.

That a misspelled Twitter condemnation of the charges by a Hollywood actor that just happened to have spent a lot of time on screen with Gollum would gather the attention it did shows the rising importance of the 140-character medium, and how — rightly or wrongly — celebrity tweets are now waited on in a way akin to embassy statements.

Doctor Bilgin Ciftci may or may not spend up to four years in jail for comparing Erdoğan to Gollum on social media as a panel of five ‘experts’ comes to a conclusion over the insult.

But his life has already been ruined after the country's national health authority fired him in October.

A medical doctor's job is terminated by the state for sharing this picture #BilginCiftci #AKP @RT_Erdogan pic.twitter.com/C7E87t1KQ7

According to Turkish rights experts, Article 299 of the Turkish penal code that Ciftci is being prosecuted under now plays the role Article 301 did under governments past.

But whereas Article 301 punished insulting the Turkish state in general terms, Article 299 punishes insulting its head — currently Erdoğan — and has been used as a premise to detain over 100 people this year according to opposition-minded media Today's Zaman.

Writing for Al-Monitor columnist Pinar Tremblay noted Ciftci was not even the first Turkish social media user to draw the Erdogan-Gollum comparison, as “such videos and memes were widely circulated over Turkish social media” during a corruption scandal in late 2013 that pointed to money laundering by Erdogan, his family and his closest political allies.

Back then, Erdogan was fighting hard to restore his political pre-eminence and fend off what he deemed the attacks of a “parallel state” financed by his US-based ally-turned nemesis Fethullah Gülen.

But Ciftci had the misfortune of allegedly insulting Erdogan during a year in which his Justice and Development Party (AKP) has bluffed and bullied its way back to the apex of Turkish politics after a wobble following inconclusive elections earlier in June.

Satirical outlet the MideastBeast produced a fairly obvious response to the charges against the doctor:

“Lord of the Rings” character Gollum has filed a lawsuit against a Turkish doctor over a series of images comparing Gollum to Turkish President Recep Tayyip Erdogan.

“Being compared to Mr. Erdogan has personally and libelously defamed my character,” Gollum told The Mideast Beast. “We may both be hideous villains obsessed with attaining power at all cost, but at least I have some redeeming qualities.”

Gollum also noted that he was not nearly as ugly as the Turkish president.

The lords enter the ring

With the expert group assessing the insult having until February next year to report back to the court on their findings, the people that know Gollum best spoke up.

Lord of the Rings Director Peter Jackson and screen writer Fran Walsh released a statement December 3 that the character depicted in the meme was actually Gollum's “joyful, sweet” alter-ego Smeagol:

If the images below are in fact the ones forming the basis of this Turkish lawsuit, we can state categorically: none of them feature the character known as Gollum. All of them are images of the character called Smeagol. Smeagol would never dream of wielding power over those weaker than himself. He is not a bully. In fact he’s very loveable. This is why audiences all over the world have warmed to this character.

But while the traditional print media eat up the pair's statement, social media went nuts for Elijah Wood's, including an army of Turkish tweeps who leapt on the hapless hobbit:

“Parallel” here refers to the “parallel state” President Erdogan accused of being the driver of the Gezi protests which shook the country in 2013, and is based on Gulen's network of supporters.

Few citizens involved with the Gezi movement actively identified with Gulen, a reclusive, moderate Islamic scholar that controls a network of schools across the world. Elijah Wood probably does not know who he is.

A more relevant question emerged in the form of picture tweeted several times: Is Erdogan in control of the ring?

And anyway, just shut up Frodo!

You shut up. I skip all the scenes you are in anyway. You can't walk properly. You can't even throw the ring properly… indecent @elijawood

Turn around and look at Gollum who you threw into the burning mountain.

smeagol was bitten your finger did you forget this ? shut up frodo @elijahwood — Yobazettin Beni (@fenomenyobaz) December 4, 2015

Some even suggested he was working to bring the state down:

And others that he didn't know the half of it:

@elijahwood This is nothing compared to @SevgiAkarcesme‘s case. She was handed jail time for a comment left by someone else under her tweet!

Ever since the bombardment, Wood has refrained from forays into Turkish politics and returned to his regular Twitter diet of retweets and merchandise promotion:

It seems safer that way…