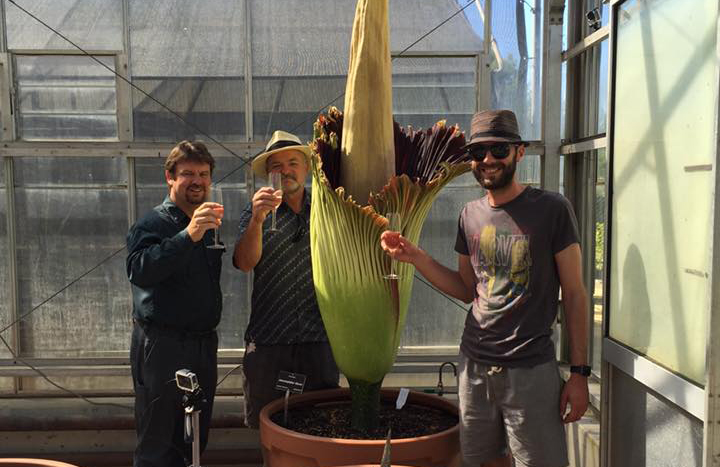 Congrats to the team at Mount Lofty Botanic Garden for their success! Photo courtesy Tom Chladek

A corpse flower has bloomed in South Australia's Mount Lofty Botanic Garden. Known for its size, striking appearance and its stench, its botanic name is the Titan arum (Amorphophallus titanum). The plant is native to Indonesia's Sumatra island, where its common name is bibunga bangkai, meaning carrion plant or corpse flower.

Despite the repulsive odour, thousands have waited patiently in line to experience its brief opening. It may not happen again for up to seven years. News had spread quickly:

Thousands Of People Are Lining Up To See A Flower That Smells Like Death https://t.co/qATOFxR435 @lanesainty pic.twitter.com/hS0k5mm59Q

Even the police got in on the act:

Motorists are advised there is heavy traffic around #Piccadilly as people flock to see #stinkyflower @BotGardensSA https://t.co/bbrcuECAGq

Natalie Whiting captured some of the curious crowd on video:

Even Britain's Telegraph joined the flower power, as did BBC News:

No wonder Tom Chladek, the photographer @botgardenssa, was enjoying the attention:

Unfortunately, any possibility of extending access into a second day was dashed by the summer bushfire season: