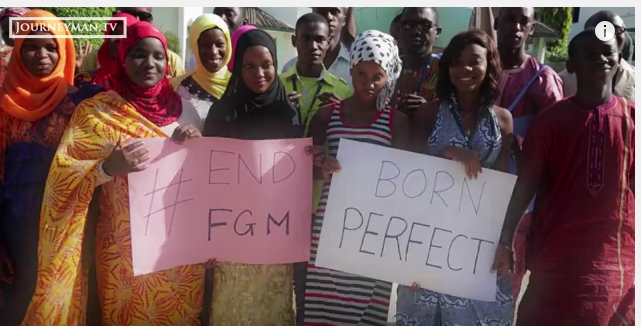 A screenshot of Journeyman Pictures’ “My FGM Story” showing anti-FGM activists in the Gambia.

Barely a month after the country's president declared a ban against the practice, parliamentarians in the tiny West African state of The Gambia have passed a bill that criminalises female genital mutilation (FGM).

In November 2015, President Yahya Jammeh announced an executive ban on the practice of FGM just days before the International Day for the Elimination of Violence Against Women.

FGM involves the ritual of removing of some or all of the external female genitalia for non-medical reasons. It is usually carried out using a blade, with or without anaesthesia. The practice has no health benefits and can come with a range of painful complications. Nineteen countries in Africa have outlawed FGM.

The new bill is an amendment to the Women's Act 2010, imposing a punishment of up to three years in jail or a 50,000 dalasi (1,250 US dollars) fine or both. President Jammeh is expected to sign the bill into law. In his November announcement banning the practice, Jammeh said:

For 21 years [the number of years he has being in power], I have been researching from the Qur’an and consulting religious leaders whether female circumcision is mentioned in the Qur’an but I did not find it there.

While some use Islam to justify the “cut”, people of other faiths throughout Africa perform FGM, pointing to a strong cultural element in the practice.

Jammeh, a self-acclaimed devout Muslim, recently declared The Gambia an Islamic state (over 90 percent of the country's population is Muslim). The West Africa strong man, considered one of the worst remaining dictators in the region, is no stranger to controversies. In 2007, he claimed to have discovered a herbal cure for HIV/AIDS and later on, diabetes and infertility, among others. He expelled a United Nation Development Programme official who criticised his HIV/AIDS cure.

Reacting to the news of the bill, Saikou Jammeh, a Gambian journalist, welcomed the new amendment saying:

However, Madi Jorbateh noted that serious work on the issue begins now. By some figures, over 70 percent of women in the Gambia experience one form of FGM or another:

I am yet to see the FGM provisions but I am very concerned about the Victims of FGM. Those that have been already cut deserve a compensation. Secondly so far enforcement of the Women Act is weak because the Women's Bureau itself has not been making the necessary investment to enforce the law. Coupled with the lacklustre attitude of the entire state apparatus about women's rights, and the misguided ideas about FGM as well as the maslaha [compromise] syndrome of our people, now is the time for serious work more than ever before.

Satang Mam Mbaye Cham, a Gambia activist, also indicated that this is only the beginning of the fight to protect women:

In the enactment of the Amendment Act, The Gambia joins a growing number of African nations that have adopted legislation as a reform strategy for ending FGM. As an activist, I believe legal prohibition will accelerate abandonment of the practice. Am sure others will argue that such a top-down approach can be perceived as coercive. The time for popularization is now. There is still need for local efforts to stop the practice. A great end to 2015 for the protection of girls and women in The Gambia. This is just the beginning. A luta continua! [Translation: “The fight continues!”]