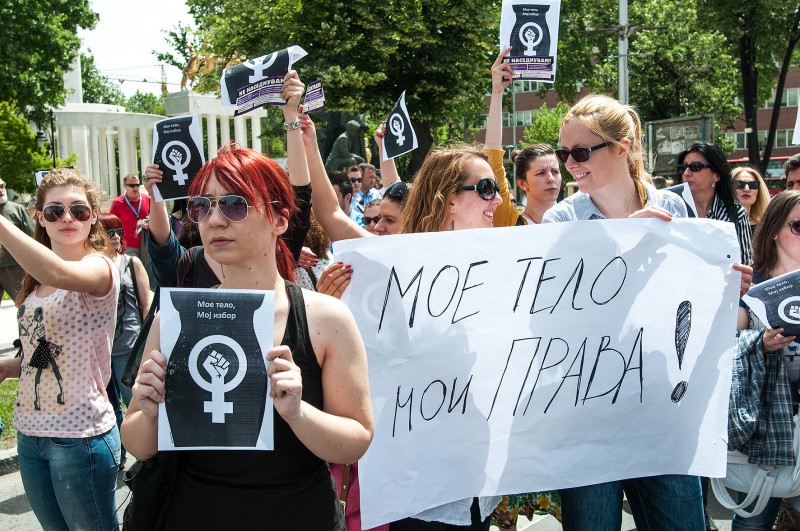 “My body, my rights!” Protest against the anti-abortion law in Skopje, Macedonia, May 29, 2013. Photo by Vanco Dzambaski (CC BY-NC-SA).

Young activists from the health education NGO H.E.R.A. used December 10, Human Rights Day, to launch a campaign challenging restrictions on women's right to choose in Macedonia. Called “It's about you!”, it consists of several videos, subtitled in English, offering a wide-ranging view of the recent history of anti-abortion efforts in Macedonia.

Women's right to choose was established during the socialist period and was a non-issue for about half a century, until the current right-wing government came into power in 2006. In 2013 it enacted a new Law on Termination of Pregnancy. According to activist publication “Choice” the previous law from 1972:

Around 2008, a previously unknown NGO started a “No to Abortion” (“Абортус не”) campaign with posters that featured graphic images of dead fetuses. Soon after, the government started official anti-abortion campaigns, which included billboards, posters, and costly TV ads over a period of several years that in essence copied many of the cliches used by anti-abortionists in the United States. For instance, they equated abortion with murder or spread fear about virtually nonexistent medical risks.

One ad featured a young pregnant couple. The would-be, teenage-looking father is reluctant until the would-be mother tells him it's a boy, the sex of the baby seemingly convincing him that they shouldn't abort.

Another centered on German composer Beethoven. According to the ad, his mother wanted to abort him, but because she didn't humanity was able to enjoy his genius.

In the first clip of the anti-stigma campaign launched on December 10, activists comment on the negative effects of the government's anti-abortion campaigns on the public's perception of abortion. As gender expert Marina Trajkova points out: “The symptomatic element is that a portion of the male population had actually created their viewpoint on the basis of the messages in these videos.”

The second clip recounts the 2013 protests against the changes in the law that made legal abortions harder to obtain as well as the media spin that accompanied them. The Parliament adopted those changes during the holiday season. As activist Ana Vasileva points out: “I presume the timing was chosen to pass these amendments at a time when a large portion of activists who would express their discontent is absent… i.e. there would be no one to protest or raise their voice.”

The third clip addresses the effects of the changed law. In short, in the words of volunteer Maja Mrmova: “After adopting the law, many women in Macedonia were denied their right to abortion.”

Few women who suffered the effects of the new anti-abortion law dare to speak about it in public. In one case, a pregnant woman whose life was in danger due to fetus malformations had to beg for nine days through the state health institutions for a permit to abort. H.E.R.A. and another organization, Reactor, documented cases of women forced to bear dead fetuses inside them for several days while suffering the mandatory delays.

Activists are using the hashtag #АбортусСтигма (Abortion Stigma) to ignite public debate via the social networks. One Twitter user recalled her reaction to one of the government TV ads:

I feel like screaming when the nurse in the government advertisement says, “Congratulations, you've just murdered a child.”

During the showing of the commercial referenced above, the country's media regulatory body intervened and censored the “you've just murdered”. The text of the commercial therefore read: “Congratulations, the abortion was successful. –BEEP–a healthy baby which could have grown into a beautiful boy or girl…”

Because it's about me, the decision whether to abort or not must remain my and only my right.

Limiting the right to abortion increases the violence against women.

Instead of anti-abortion campaigns, introduce comprehensive sexual education in the schools.