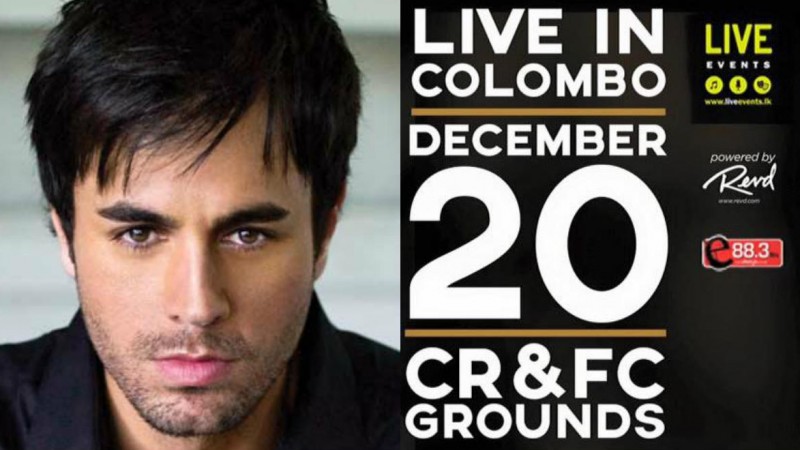 What do toxic stingray tails have to do with Spanish-American pop star Enrique Iglesias? Sri Lanka's President Maithripala Sirisena thinks organisers of the singer-songwriter's concert in the country on December 20, 2015, should be whipped with them — an ancient, cruel practice — as punishment over the behaviour of local fans during Iglesias’ performance.

Sirisena was commenting on the fact that some women in the audience hugged and allegedly kissed Iglesias and that someone threw a bra at the musician while he was on stage.

Video of the bra being tossed Enrique Iglesias’ way soon went viral, with more than 100,000 views.

Public displays of affection are not welcome in conservative Sri Lankan society, and the president argued that all citizens are responsible to safeguard the dignified Sri Lankan culture and ethics. He vowed his government will not allow “indecent” events such as Iglesias’ Love and Sex world tour to be held in the future.

But online, many spoke out against what they viewed as the president's moral policing. On Twitter, the hashtag #BrasForSL started trending:

It's stupid to throw a bra at an world renown artist, but it's bullshit to ban concerts due to this. #BrasForSL

What @MaithripalaS should have done was ban wearing bras to shows like Enrique and so on. Not ban the shows. #SimplePlan #BrasForSL

Bras are expensive. So very expensive. They aren't supposed to be thrown even at sakra devendra. #BrasForSL #EnriqueInSL

Future live in concerts in #SriLanka. No liquor, No food, No pets & finally No bras. #BrasForSL #lka #EnriqueInSL pic.twitter.com/pSHzRUFd3w

There are also people supporting the president:

Throwing a bra is completely wrong. There is neither freedom or rights in it. Imagine the opposite happens!! #BrasForSL

Iglesias’ performance was surrounded by controversy in other areas, too. The concert at the Ceylonese Rugby & Football Club Grounds in Colombo, Sri Lanka, was organised by Live Events, which is managed by radio personality Riyaz Shah Shaq along with cricket stars Kumar Sangakkara and Mahela Jayawardene. Spectators complained about long queues and poor crowd control, and the show's start was delayed by three and a half hours. The cost of the tickets was high, ranging from 5,000 rupees ($35) to 35,000 rupees ($244) and those who paid a higher value did not receive any preferential treatment.

Ashanee Kottage wrote an open letter to Iglesias on publishing platform Medium describing the good and the bad of the concert, including a handful of racist boos when the musician brought up a fan from India on stage:

Thank you for deciding to perform in a country you probably hadn’t, but should have heard of, because you made dreams come true last night.

Thank you for taking the time, and I’m sure this is the real reason behind your 3 and a half hour delay, to learn how to say Ayubowan and Obata Stutiyi, the pronunciation was spot on and we immensely appreciate it, Hola y gracias to you too Mr Iglesias.

So I’d like to apologise, for the people that called themselves adults but acted like little children high on sugar last night, for the security forces who could be easily swayed by a bribe, for the organisers who are seemingly unqualified to even arrange a 3 year old’s birthday party, and last but not least, the racist, narrow-minded, arrogant people that booed the gentleman from Bangalore that you called on stage.

The event's Facebook page has been flooded with many of the fans venting their anger at the mismanagement on and off stage and some also demanded refunds. The event organisers apologised for the chaos and the inconveniences via social media.

Still, it seemed plenty of people were happy with Iglesias’ performance:

Good things come if you wait for it. This is one of those moments. #EnriqueInSL 😍😘😘😘 Tks @enrique305 @LiveEventsLK pic.twitter.com/FQT0OnPeME

And then @enrique305 hugged her on the stage. She was the luckiest. #EnriqueInSL #SriLanka https://t.co/MaaTLHKcPx pic.twitter.com/d1fww8kKR3