2015 Was a Year of the Absurd in Ex-Soviet Tajikistan 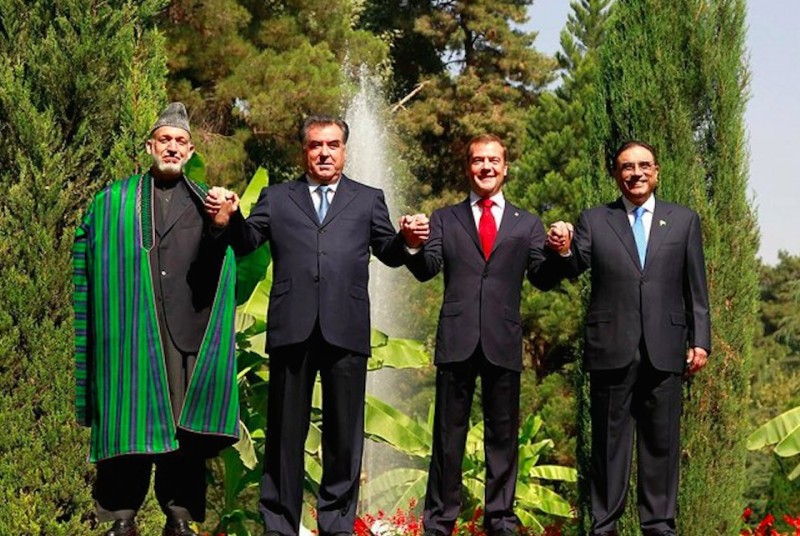 Rakhmon is second in from the right, between then-presidents of Afghanistan and Russia Hamid Karzai and Dmitri Medvedev. Wiki image from 2011.

Last week Tajik President Emomali Rakhmon signed into law a bill that makes him the country's ‘Leader of the Nation’, a move that provides him and his family lifelong immunity from prosecution and creates the basis for a personality cult comparable to that enjoyed by other strongmen in former communist Central Asia.

What exactly he is leading the nation towards, however, is far from clear.

Few would have betted on Rakhmon's ability to consolidate ultimate power back in 1992 when he was thrust into the role of Tajikistan's head of state amid a bloody civil war that would rage for a further five years claiming over 100,000 lives.

It is arguably the threat of a return to those dark times that has sustained his family's corrupt and occasionally vicious rule over the landlocked country of 8 million people.

But as Rakhmon has grown more confident in his power, the news coming out of the long-suffering Central Asian republic has only got weirder and weirder, flirting with full-blown dystopia on occasion.

This year, Tajikistan was Global Voices’ most covered country in the Central Asia and Caucasus region. Below are just five reasons as to why:

1. Opposition candidates find it really difficult to get on an electoral ballot, even if they used to teach the incumbent president maths.

The first part of Tajikistan's year was dominated by news relating to parliamentary and council elections taking place in the country.

Currently all the parties in Tajikistan's lower house are loyal to the regime while the IRPT, whose leadership has since been mostly imprisoned, was declared a terrorist group in September.

In the build up to the vote, several colourful stories emerged that suggested this year was going to be an even whackier year in Tajik political terms than most.

Among the most compelling of these was the failure of Rakhmon's 83-year-old former maths teacher to register as an opposition candidate for council elections in the president's home district. Apparently, following a pre-registration examination, his handwriting was deemed too bad to compete.

It is mandatory for MPs to have good handwriting, as when the computers and printers are taken out of government offices to save energy [due to a shortage of electricity in the country] parliamentarians will have to reply to their voters with a pen.

2. The government is prepared to go to really ridiculous lengths to crack down on religion.

This year was not the first year reports have emerged of forced beard shavings in Tajikistan, nor was it the first year the government has called for an end to ‘non-Tajik names’.

But the frontal assault on all signs of Islam in the secular country is noticeably gathering strength, taking in de facto bans on Islamic dress including the hijab.

One famous blogger caused a sensation when he wrote an account of his own forced shaving at the hands of police.

Meanwhile, the local names only plan appears like it will finally become law as draft legislation is discussed in the Tajik parliament and the government prepares a list of 3,000 names parents will be forced to choose from when registering a birth with the state.

Catherine Putz of the Diplomat wondered whether Emomali — a name with Arabic roots — would be among them.

3. If you want to extort money from someone, just pretend you are the president's son.

Khushdil Kurbonov, a 10th grade high-school student of the prestigious Dushanbe International School, made waves online when he came under investigation for securing a bribe from a local businessman after impersonating President Rakhmon's youngest son, Somoni Emomali.

The bribe was paid in exchange for the promise of a piece of land outside the capital, and in a country where the Rakhmons’ word is law, it is perhaps understandable — if still incredible — that the businessman fronted up the cash.

For Tajikistan's internet users, the story was perhaps the biggest indicator yet that corruption has become fully accepted in the country, and that few doubt the ruling family is rotten to its core.

The main irony of the story is that the anti-corruption agency investigating Kurbonov's scam is controlled by Rakhmon's real son: Rustam Emomali.

Nothing has been heard of Kurbonov since.

4. The prisoner escaped from the prison in the trunk of whose car?!

The prison director's car of course!

Read it and weep, but don't forget that there are plenty of heroes in Tajikistan railing against the madness, including the police officer that re-arrested the fugitive in spite of the fact state officials were clearly complicit in the escape.

5. The former head of the interior ministry's special forces unit betrayed the country and is currently fighting with ISIS. That's right, ISIS.

Government officials claim around 800 Tajik nationals are fighting with ISIS, an Al Qaeda offshoot which has come to control large parts of Iraq and Syria using openly brutal, oppressive and violent tactics.

The group's main theatre of operations is thousands of miles from Tajikistan, but some Tajik citizens have been ensnared by ISIS propaganda and recruiters based in Russia, where more than a million Tajiks live and work.

Gulmurod Halimov, who ran the interior ministry's special forces department represents possibly the most high profile defection from any national government to ISIS since the group came into existence.

In a 12-minute video released in May, Halimov, 40, said he had defected in protest against the policies of the Tajik Interior Ministry, which “does not permit people to pray and wear Islamic hijabs.” He then threatened the “dogs” in the government that him and other Tajik ISIS fighters were “coming for you with slaughter.”

Izzat Amon, a Tajik migrants’ rights activist wrote on his Facebook page at the time:

I will not try to justify the actions of the [Special Forces] commander, but I understand him. When corruption, regionalism, nepotism are rampant in the country and everybody lies, then there are few other ways out. This is the result of the politics of the ruling group for the last 25 years. If it continues this way, then even ministers will deliver video-messages from ISIS territory. Dear officials, continue your fight against the hijab, the beard, the Azan [call to prayers] and other Islamic items. But it will most certainly come back to you like a boomerang.