Many Afghans See Their Future with India, Not Pakistan 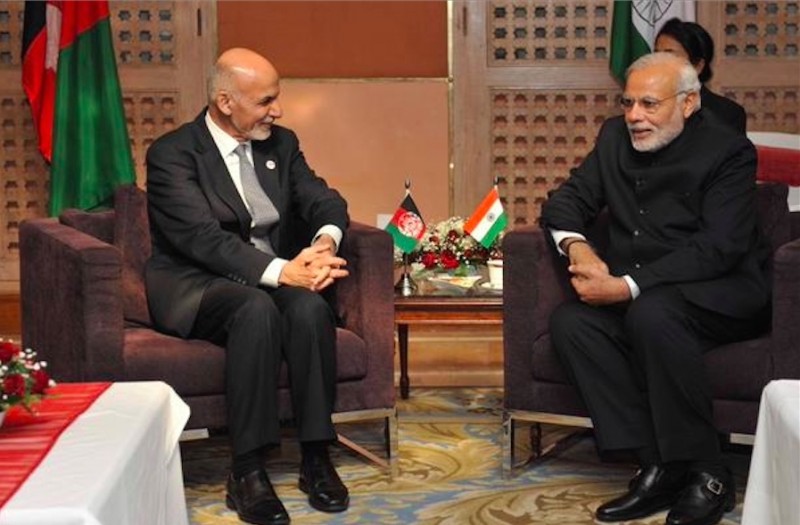 Indian Prime Minister Narendra Modi was in Kabul on December 25 to inaugurate the new Afghan parliament building constructed with funds from New Delhi, after the original building was bombed by the Taliban.

The buzz surrounding Modi's visit epitomised the warm relations between the two countries, while the story of the Afghan parliament symbolises the fragile country's ongoing struggle with an insurgency many Afghans blame on neighbour and Indian rival, Pakistan.

Past & Future. On 1 side the Dar ul Aman palace bombed out by Taliban. On the other the shining new Parliament bldng pic.twitter.com/q0dlcZMJ0N

The day after Modi visited Kabul he was in Lahore to become the first Indian premier to visit Pakistan in over a decade, fuelling hope of better relations between the two countries.

But for many Afghans that have witnessed their own President Ashraf Ghani's failed attempt at outreach to Pakistan, Modi and India remain the main attraction in terms of the country's strategic orientation. A poll from last year showed three out of four Afghans see India as their preferred leader in Asia.

#India won #AFG people hearts by over $2b investment in rebuilding of #AFG, #India is among 5 biggest donors! pic.twitter.com/Q0j6Mk7I5w

Relations with India, both in the areas of security and civilian aid have been vital for Afghanistan in the post-Taliban era when Pakistan has proved a less constant source of friendship.

Also in November, Indian Foreign Secretary Jaishankar and Afghan Deputy Foreign Minister Hekmat Khalil Karzai discussed ways to increase bilateral cooperation that has seen India offer over $2.5 billion in aid to Kabul and has been expanded since the signing of a 2012 strategic cooperation agreement.

For both Pakistan and India, Afghanistan is an object of strategic struggle, serving as a land bridge between South Asia and Central Asia while also connecting South Asia to West Asia.

Some of the projects ongoing between Kabul and New Delhi have obvious geopolitical implications.

One such project is the Zaranj-Dilaram road which connects western Afghanistan's Nimroz province to the Chabahar port in Iran. The road will help facilitate trade exchanges between India and Afghanistan while reducing Afghanistan's dependency on the Pakistani port of Karachi.

As Modi visited, Afghan social media circles poured out their love for India, at the obvious expense of the country's other significant neighbour. 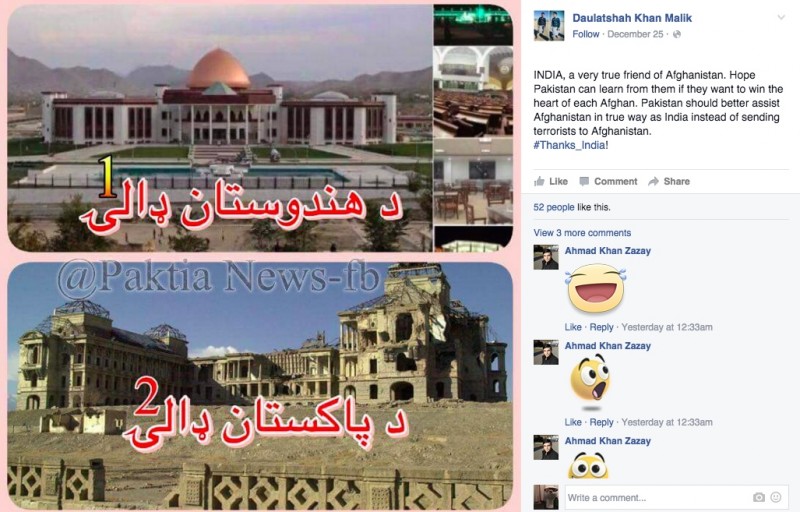 Screenshot of a post from a public Facebook profile of an Afghan social media user. The post ironically compares India's contribution to Afghanistan's development to that of Pakistan, viewed through the prism of the Taliban.

The growth in India-Afghanistan relations in the post-Taliban era was most notable under President Hamid Karzai who famously offered Indian investors “the red carpet while others will get a grey carpet.”

Karzai himself was a beneficiary of an exchange program that allowed Afghan students to study in India in the 1970s.

Ghani, who came to power after a disputed election last year, initially took a different tack, prioritising relations with Pakistan, whose ex-leader belatedly admitted nurturing the Taliban as part of their bid for ‘strategic depth’ in the country in an interview last year.

The bid for better relations was without success, and the Taliban's attacks in the country have only grown more fierce, even as the movement itself has splintered.

Since then Ghani has pivoted back towards India, to the audible relief of those that feared his overtures to Islamabad were doomed from the outset.

Yet while Modi's visit led to a frenzy of appreciation among the chattering classes in Kabul, there is a sense his country could do still more for its conflict-torn neighbour.

For one thing, New Delhi can use the leverage it has built up through aid and investment in strategic infrastructure to push for social reform in Afghanistan, especially in areas where India has experience.

These include but are not limited to: empowerment of women, handling of ethnic and religious minorities and broadening civic participation.

India's supporters argue that its hand in Afghanistan is strong enough to bargain for values as well as security.