For Land-locked Nepal, a Year of Natural and Man-Made Disasters 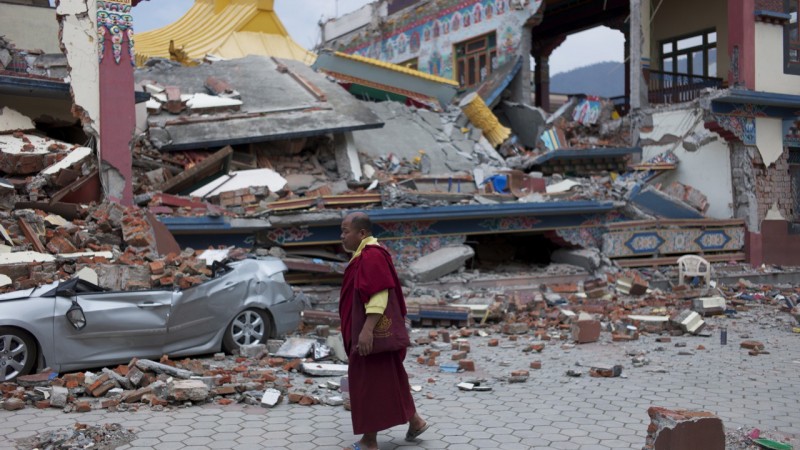 This has been a rough year in Nepal, the land-locked country of 27 million people, which shares borders with powerful giants China and India.

Landslides from a devastating earthquake in April destroyed its supply routes from China, leaving Nepal completely dependent on its 1,751km (1,088-mile) open border with India.

But ties with its neighbour India began to  sour, after Nepal finally adopted a new federal constitution in September. Trucks bringing in vital supplies and fuel worth USD 302.53 million into the earthquake-recovering country started queuing up for 14 kilometres on the Indian side of the Sunauli border.

The Indian government insists that it has not imposed a blockade on Nepal and claims it is being cautious about truck movements due to protests close to the border following the new constitution. Locals report that even when there aren't any protests in the area, only a set number trucks are allowed to pass every two to three days.

Nepal's much awaited new constitution went into effect in September. India advocated seven amendments to the new constitution to ensure the Madhesi and Tharu communities — who represent about 40 to 50 percent of Nepal's population — were well represented. The constitution was meant to heal the wounds between the people of the hills, who hold most of Nepal's political power, and the people of the plains the Madhesis, who share ethnic and cultural links with people across the border in India. The Madhesi struggle is for dignity and inclusion, and an effort to be an equal Nepali citizen. For years, Nepal's politically-strong ‘hill’ establishment have mistrusted the Madhesis as a fifth column that sides with India against the interests of Nepal.

Why India is concerned

The new constitution defines the majority Hindu nation as a secular republic divided into seven federal provinces and was in the works for over a decade. The Madeshis and the Tharu ethnic minorities, have been protesting that the proposed boundaries of the new provinces could lead to their political marginalisation. India is concerned that these protests could spur violence which could spill over into its own territory.

Prashant Jha at Hindustan Times explains why a lot is at stake for India:

A peace process was conceived and signed in New Delhi exactly ten years ago, at the end of 2005. India has been an actor through much of the process in Nepal – from encouraging Constituent Assembly elections, mediating between the government and Madhesi protestors in the past to come to pacts, getting involved in government formation exercises and more. Some of this was legitimate, some of it was excessive. But given India’s deep engagement in the process, it cannot wash its hands off at this moment of climax, when the process itself is about to crumble.

Is Nepal being punished?

But Nepalis reacted strongly against India's intervention in the constitution, and some Nepalis theorize that India is punishing the landlocked state over the matter. Blogger Shiromani Dhungana writes:

Being landlocked, most of Nepal’s imports come via India. Although international laws provide landlocked countries the right to unrestricted passage to the sea, India has been unquestioned by the international community on the way it is putting an entire country of about 28 million in “ventilator support”.

By blockading Nepal, India is supporting a group of protesters in Central Terai of Nepal. The blockade has caused massive suffering to people all over the country. Economy has been destroyed and might take years to recover. Jobs have been lost, investors have pulled out, major infrastructure and development projects have been badly affected and put out-of-schedule, and education of millions of kids has been disrupted. Industries have closed because of lack of security and raw material supply. Vaccination programs have also been disrupted. This shows the scale of suffering Nepal is facing because of the inhumane blockade by India. 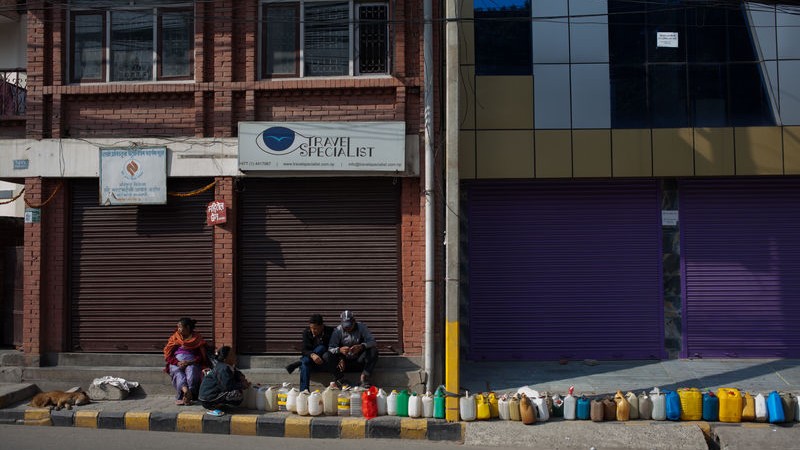 The country is still recuperating from the devastating earthquake in April that killed more than 9,000 people and left more than 23,000 injured. Across many districts, millions of people were made homeless, with entire villages flattened. The earthquake has had knock-on effects on a myriad seemingly unrelated aspects: human trafficking, labour costs and availability, rental and property cost burdens, urbanization, private and public debt burdens, mental health, politics, tourism, as well as disease and healthcare infrastructure. The landslides caused by the earthquake have destroyed alternate supply routes from China, leaving Nepal dependent on imports from India.

As of 1 May 2015, international aid agencies like Médecins Sans Frontières (Doctors Without Borders) and the Red Cross were able to start medically evacuating the critically wounded by helicopter from outlying areas, which were cut off from the capital city, Kathmandu, and treating others in mobile and makeshift facilities. 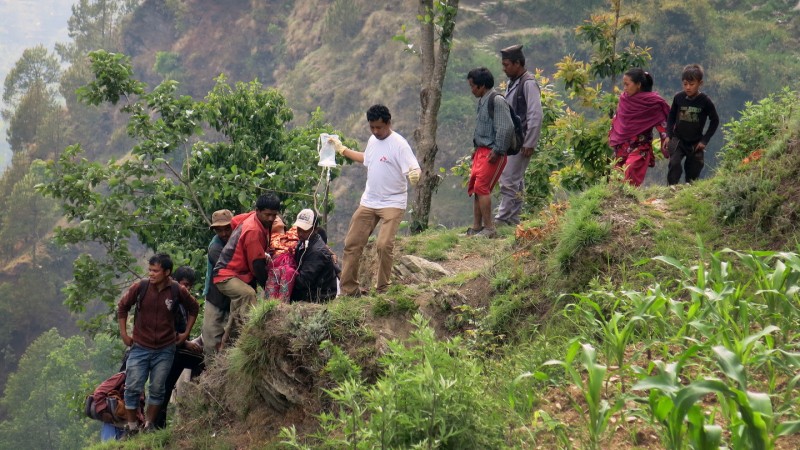 A pregnant woman in labour is evacuated by MSF teams conducting medical clinics in the districts of Sindhupalchowk, Dhading, Rasuwa and Dolaka in Nepal. Image by © Emma Pedley/MSF. Used with permission

Seven months after the earthquake hit Nepal and caused heavy casualties, MSF and Red Cross teams are still working in the country to deal with the aftermath of the disaster. Iris Leung of MSF Hong Kong writes about her experience while visiting the Spinal Injury Rehabilitation Centre in Sanga, about one hour’s drive from Kathmandu:

When I saw Biraj, he was in his wheelchair, striving to climb to the top of the slope and then race down as if it was a roller coaster. He repeated several times – it was a three-wheeled manual wheelchair, which means he was using his strong biceps to push himself up the gradient.

I began to wonder where Biraj could go after he was discharged. Nepal is not a wheelchair-friendly country, so he will not be able to move around as easily as he used to, not to mention finding a job to make a living. Thinking of how many obstacles he would have to overcome, I was overwhelmed by a sense of hopelessness.

Then he said, “I have negative thoughts. But if everyone gets positive, I will get the energy to stay positive.”

MSF is handing over its activities by December to local hospitals, but there is a severe medicine and food crisis due to the blockade; millions of people are at risk in Nepal, where people spend on average 60 percent of their disposable income on food, the UN warns. The price of food has spiked because of the shortage in supply. It is unclear how patients like Biraj can get back to a normal life with the blockade around.

A lot of people have now run out of cooking gas and so are cooking on wood fires – the air is noticeably smoggier.

Petrol is being sold in very limited amounts. What petrol there is being prioritised to schools, hospitals, buses and government agencies.

Shop shelves are looking sparse as all imported goods start to run out. Electricity is erratic as those who can afford it have bought electric induction plates and other similar things for cooking and are stretching the system. From tomorrow our regularly scheduled power cuts will increase to 8 and 9 hours a day due to the increased electric usage. Although the fuel shortage has meant a number of business have shut down, reducing some power usage, so it could be worse.

Blogger Shiromani Dhungana also writes that the displaced earthquake victims are facing the hardest time due to the blockade:

Several earthquake victims have died this week due to cold. Earthquake victims cannot buy food, fuel, and construction material to build shelters because of the blockade. They are having to sleep outside. A harsh winter in the hills is worsening their condition. [..] Humanitarian organizations cannot operate under such lack of essentials.

Fuel queuing situation in #Kathmandu is absolutely appalling. Somethings got to give #IndiaBlockadesNepal #Nepal pic.twitter.com/opW4nLuuns

Kinda Dixit in a blog in Nepali Times blamed the incompetence of the government, which he argued is ignoring the plight of over 2 million earthquake survivors this winter:

The whole country is suffering from the blockade, but the plight of homeless earthquake survivors is doubly perilous. Yet an uncaring state is blissfully unmindful to their predicament.