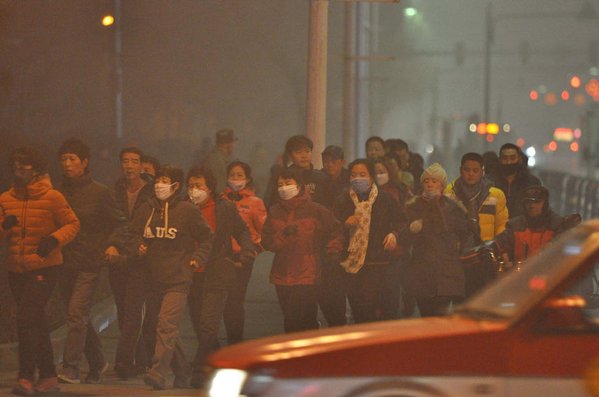 During Christmas as toxic smog spread from the northern provinces to central China, the country's netizens expressed concern that air pollution will become the new “normal” as official state media continues to twist a positive angle out of the bad news.

People living in mainland China could not enjoy Christmas amidst the toxic smog attack. Bill Bishop reposted on Twitter a humorous mini-story circulating on Chinese social media about the fate of Santa Claus in China:

Here is the full text and translation of Chinese dark humor on the smog that ruined Christmas:

Important notice: Santa Claus fell from the sky when traveling from Denmark to China because the smog was too heavy here. No one dared to help him and he was left lying on the snow. The gifts in his bag were all robbed and his reindeers were confiscated by the city management patrols [or Cheng-guan]. His sleigh does not have a vehicle license and was thus confiscated by the traffic police. This year Christmas is cancelled, please inform others!!!

Heavy industry and coal consumptions during winter filled the air with PM2.5, a tiny particle that can penetrate deep into the lungs causing all kinds of deadly diseases and failure of vital organs. On December 25, Christmas day, Beijing was blanket with a “white” color, caused by toxic smog. The US embassy's data showed that the counts of PM2.5 peaked at 620 micrograms per cubic metre. A healthy exposure level is 25 micrograms.

Though red and yellow alerts were all over the country during Christmas, state media managed to find a positive angle by highlighting how people are still continuing their normal activities despite the smog. For example on 22 December, the state-run news wire Xinhua News posted this tweet on Twitter:

Nothing can stop jog-loving Chinese! Not even #smog! Joggers unfazed by heavy haze in NE China's Shenyang. Good Luck pic.twitter.com/vTO7a7uIGS

Such positive reports make people worried if the government is determined to fight the smog, or the problem will become a “new normal”, which is also a new political term being used for the Chinese government's latest economic policy for addressing the slowing down of the country's economic growth. For example, Ge We Yao from Shanghai International Fashion Federation commented on Weibo:

Shanghai has “heavy pollution” level for three days, now [smog] has become a “new normal”. The [pollution] is so widely spread in such a prolonged period. This should be considered a natural disaster, how come no one from the government comments on the situation, [no one] takes advantage of the centralized power of the government to implement new policies that combat the smog and [no one] prioritize the lives of tens of million people and manifests the advantage of socialism?

In early March, Chai Jing's documentary shed some light on the root causes of smog, including the lax enforcement of environmental statutes on heavy industries and vehicle fuels. The documentary has gone viral and resonated among netizens but the government seems to put more effort in creating the APEC and military parade blue sky in Beijing rather than introducing policies for the public to see a blue sky.

We've been reporting about China's “airpocalypse” for the last few years. As 2015 draws to a close we wonder if China's toxic smog and environmental problem will become the “new normal” in 2016 or will the government step up?

Here's our coverage of China's environmental problems in 2015: