Christmas in Japan? Get Ready for Running Trees, Dazzling Lights, and Fried Chicken 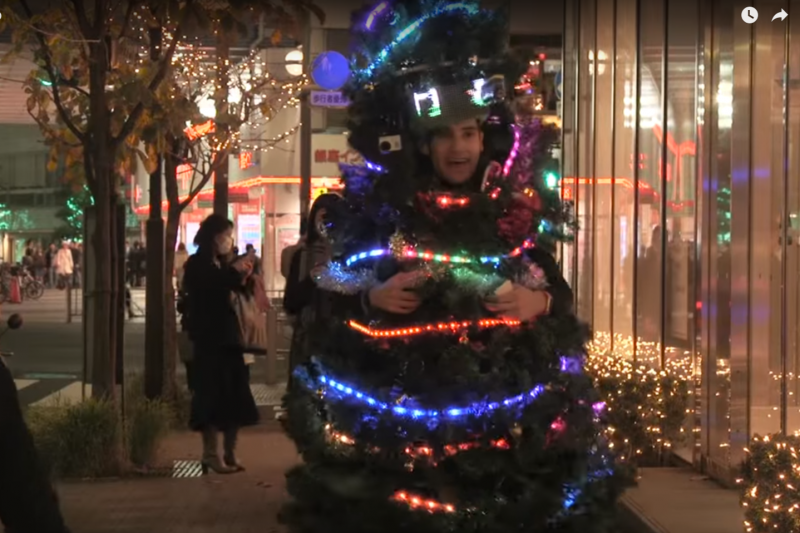 One of the hottest Japan memes over the past month has been photos and videos of Joseph Tame running around Tokyo in his “Wearable Christmas Tree.”

While Tame may not be originally from Japan, his whimsical exploits resonate with a country that has embraced Christmas in its own unique way.

Preparing the Wearable Christmas Tree for another day of Christmas wonder in Tokyo https://t.co/uwv044X9q3 pic.twitter.com/0056ffUTyD

For many Japanese people, the month of December marks the start of “illumination“, where public places all over Japan are lit up. Christmas trees often take center stage.

This display in Tokyo's Shiodome is a perfect example.

This year's illumination… The lights are synced with music and it's really beautiful! We were so lucky to be a the front of the line to watch the entire show.

The city of Kobe in western Japan is also famous for its December illumination, called the Kobe Luminarie. The tradition began eleven months after the Hanshin Earthquake in 1995 raise raise spirits after Kobe was virtually destroyed.

December 25, 2015: Merry Christmas to all! #kobeluminarie

Elsewhere in Japan's Hanshin region, someone who couldn't make it to Kobe found a magical Christmas experience of their own:

I couldn't get to Kobe to see the lights, so instead I saw the Christmas tree at Universal Studios Japan [in Osaka, which neighbours Kobe]. I didn't go on any rides but it was fun! (⌒▽⌒) I tried making a yule log… and it tasted delicious! I'll try making one again. And that's how I spent my Christmas Eve (lol).

Of course, Christmastime in Japan is about more than just stupendous light displays. Christmas Eve is a popular date night for couples, and baked chicken and a desert of Christmas cake requisite parts of the meal.

This year I'm spending Christmas Eve in Shiodome, at BiCE Tokyo. The food is really good, and we can look at the Tokyo Sky Tree while eating dinner… it's the best!

Almost every corner of Tokyo is lit up in some way. Here is the view from Roppongi, in “mid-town”, or central Tokyo.

Cake plays a key role in how Japan celebrates Christmas. Here are some delicious cakes from the Pierre Hermes shop in Matsuya Ginza, one of Japan's top department stores.

And of course, no Christmas in Japan would be complete without Kentucky Fried Chicken:

Merry Christmas from the suburbs! Out here in Futako there are two Santas in front of the Kentuck Fried Chicken outlet!