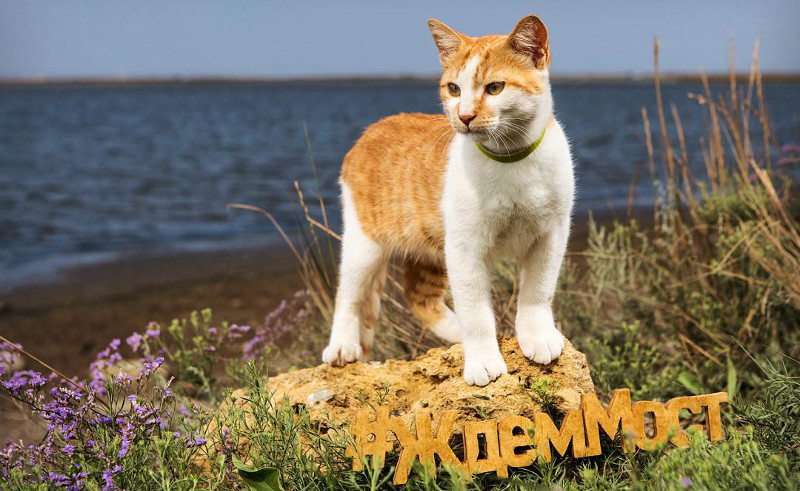 Most the cat will help occupy your time #WaitingfortheBridge from Russia to annexed Crimea. Image from @cat_the_most on Instagram.

If you were ever at a loss as to what your social media strategy should include when you're slowly building a very expensive bridge to illegally annexed territory, the answer is: cats.

The so-called “Crimean Bridge” is an ambitious construction project launched by Russia shortly after its annexation of the Crimean peninsula from Ukraine in the spring of 2014. Because Russia currently has no land connection to Crimea, the bridge, stretching from the Kuban region of Russia to the shores of Crimea, would be a strategic transportation artery, allowing Russia to carry supplies, construction materials, goods, and people to the peninsula and back.

Russian President Vladimir Putin raised the idea of the bridge across the Kerch straight back in March of 2014, and later Prime-Minister Dmitry Medvedev assigned the “Stroygazmontazh” construction company, owned by Putin ally, oligarch Arkady Rotenberg, as the main contractor for the bridge development project.

Although initially the planning and construction costs for the bridge were projected to be around 50 billion rubles ($709 million), more recent estimates by state companies involved in the project put the figure at close to 300 billion rubles ($4.25 billion).

Russian authorities say they want to complete the bridge by December 2018, but many experts are skeptical about the project's feasibility, pointing to huge expenses and geological challenges.

Although the 19-kilometer-long bridge is nowhere near complete, it already has a strong Internet presence and—what's more important—a cat-based social media strategy.

The splash page of the Crimean Bridge website. Screenshot from most.life.

Not long ago the bridge got an official website, most.life, where users can learn about the construction project's history and progress, and see photos and videos related to the endeavor. “The very URL of the website isn't an accident,” claims the project's press service. “The quality of life for people on both sides of the straight directly depends on the bridge.”

The (as yet non-existent) bridge also has accounts on Facebook, Twitter, Instagram, VKontakte and Odnoklassniki, mostly sharing the same cinematic images of the construction process and the local sights, as well as bits of ephemera related to bridge-making. Photo of the construction process. Image from the Crimean Bridge VKontakte page.

Our favorite part of the Crimean bridge social media activity is a separate Instagram account of a cat called “Cat the Most” (“мост” is Russian for “bridge”) featuring a feline mascot hanging about the construction site, monitoring the bridge's progress, and dispensing regular wisecracks. Just look at this guy.

If they keep feeding me like this for another month, I'll be the size of this truck.

Most the cat even has a legend: the beast allegedly appeared on the construction site one day and was taken in by the workers. The cat's Instagram account tries to cater to various audiences, including hipsters.

Gonna go look for a barbershop in Taman. Wish me luck on this difficult quest.

It's clear that the multitude of social media accounts and their activity aim to occupy the popular imagination while the construction of the transport link shuffles along, with no concrete end date in sight. The bridge's official Instagram account has a little over 1,400 followers, and Most the cat brings in another 637 with its playful images and quips. Whoever is behind the project's social media strategy clearly knows their stuff: on the Internet, cats can fill any void, even if it's a bridge-shaped void worth several billion dollars.