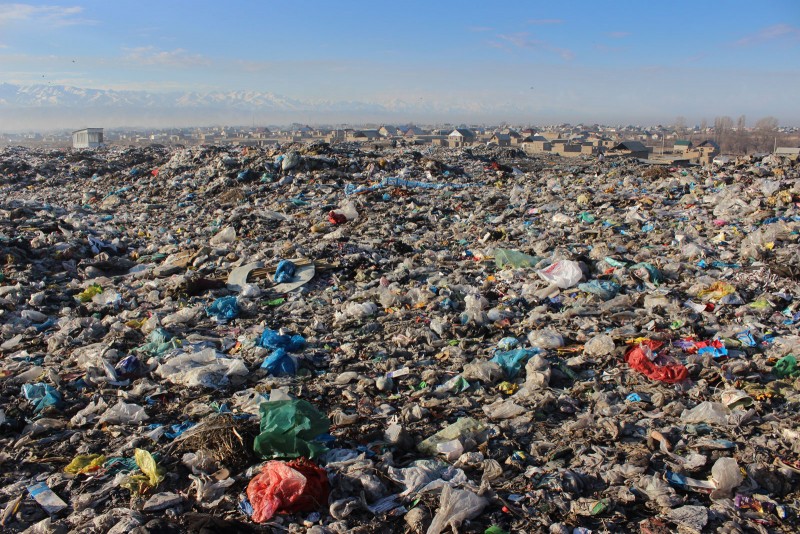 The dump with informal housing in the background. Photo by Azamat Imanaliev. Used with permission.

Kyrgyzstan’s biggest rubbish dump occupies a territory of about 120 soccer fields and is covered with garbage piled 10 metres high in most places.

The territory, defined by its strong stench, abundant rat population and circling birds of prey, reached its permitted waste capacity way back in 1990.

It has been a major public concern for over two decades since its official terms of service expired. Now it is a hazard to the environment and the residents that live in informal housing surrounding it, some of whom work there sorting rubbish for a living.

Part of the problem with the dump in the capital Bishkek is that it has had no competition since it first began amassing rubbish in the Soviet era. It is the city's only landfill. 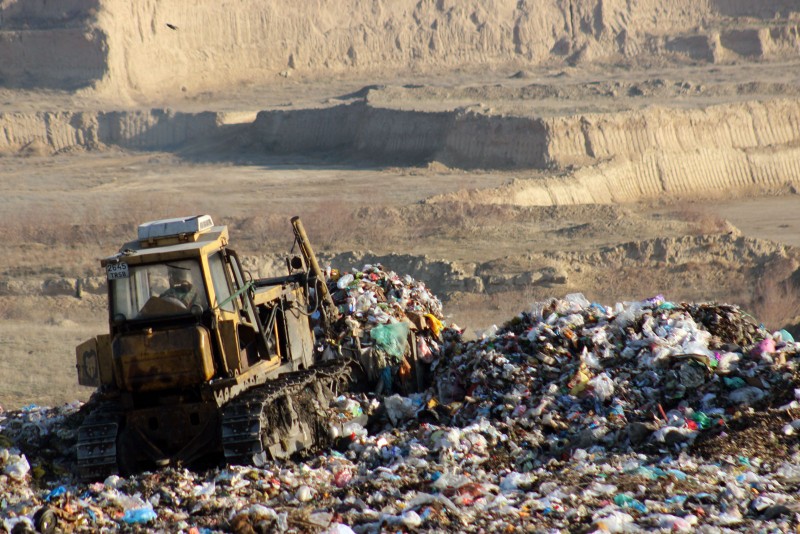 Lacking proper infrastructure and sufficient investment, the dump has become a toxic hub polluting the air above it, the ground below it and a local lake. Smouldering with foul fumes all year long, its effects on the human body are also beginning to tell.

The dump as a threat

The volume of garbage has risen with Bishkek's population which has grown by 25% to almost 1,000,000 since the turn of the millennium. Initially the dump was not designed to meet the needs of a city that size.

The dump releases methane, which is the most potent greenhouse gas that also happens to be flammable. There is no way of controlling the levels of this hazardous gas, making the dump quite literally a ticking bomb. 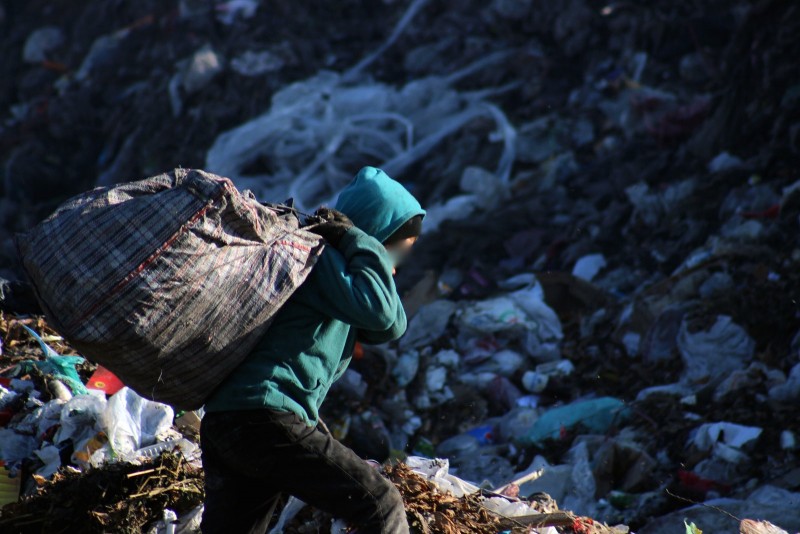 A young labourer working at the dump. Face blurred to prevent recognition. Photo by Azamat Imanaliev. Used with permission.

As the dump has grown, so has the dissatisfaction of communities living ever closer to its creeping boundaries.

Back in 2011, the residents of a local novostroika, or new settlement, gathered to demand the government hold a special session on relocating the dump. Otherwise, they said, they would block the roads.

Damir Kokozhanov, the leader of protesters, told the Russian-language news agency 24.kg then:

In the summertime burning garbage spreads the stench, ashes contain heavy metal oxides. They pose a deadly risk. It is a threat to the gene pool of the nation.

The talks took place, but no decision to relocate the dump was made. Today, it receives ever-increasing loads of solid waste.

The dump as a business

According to Aikokul Arzieva, who conducted ethnographic research at the dump in 2013, as many as 300 trash-sorters rely on it for their daily living.

In this way, it serves as a safety net for people — many of them internal migrants — in a country where high unemployment has triggered a labour exodus to Russia. What is more, the sorters perform a recycling service while risking respiratory illnesses and worse. 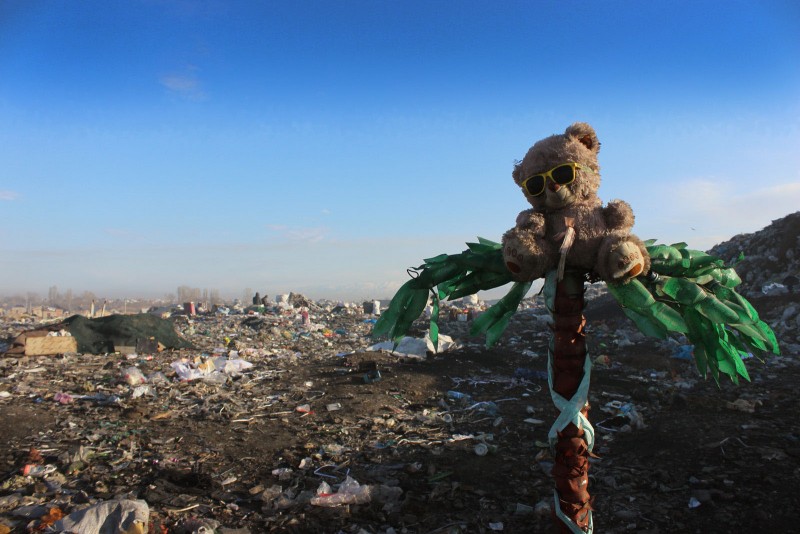 A teddy bear at the dump. Salvageable items are often washed and resold on Bishkek's markets. Photo by Azamat Imanaliev. Used with permission.

“Despite their contributions, waste pickers have a low social status, face social oppression, and earn much less than other participants in the informal garbage business,” Arzieva told the local News-Asia agency.

Attempts to turn the convert the dump into some kind of legal business, such as a waste incineration plant, have mostly proved unsuccessful.

Investors doubted the dump's recycling potential, expecting it to be unprofitable. It was not until the European Bank for Reconstruction and Development (EBRD) agreed to come in as a partner in the project that any solution was in sight. 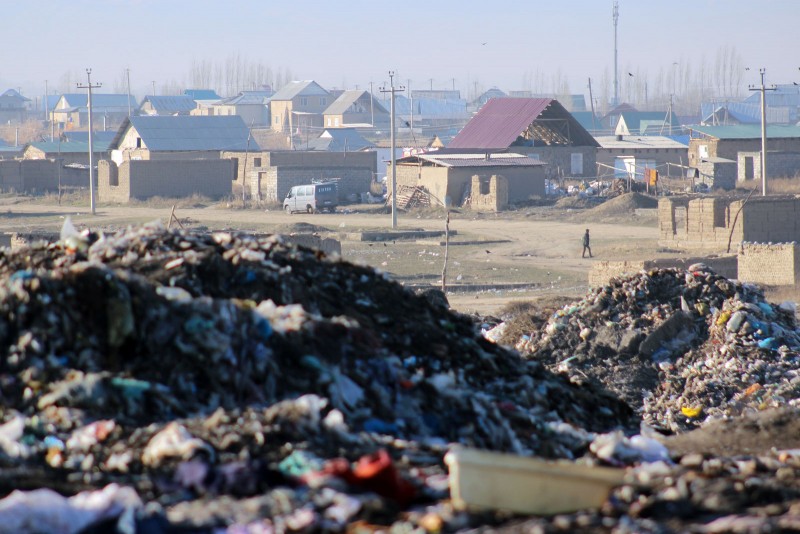 Informal housing in the backdrop at Kyrgyzstan's biggest dump. Photo by Azamat Imanaliev. Used with permission.

EBRD agreed to assist Bishkek in setting up a waste collection and disposal system on a mixed loan and grant basis. The total investment amounted to 22 million euros, half of which was a shared grant from EBRD and an unspecified international donor, the other part of which would be a loan to be paid off with the fees collected from citizens in later years.

The business model had a major flaw, however. According to the Mayor of Bishkek, Kubanychbek Kulmatov, the municipal government has historically been unable to collect hauling fees from city residents.

At the event Urban Talks organized by the local civic group Urban.kg, Kulmatov explained that of 1.5 million citizens living in and around Bishkek, only 560,000 pay the hauling fee of 15 Kyrgyz soms (around 20 US cents).

Despite unpromising business forecasts, the EBRD investment went ahead, and by 2017, a new sorting plant should be completed on the site of the dump.

The positive outcomes are obvious: the pollution caused by the decaying garbage will be reduced and the dump will become more sustainable. The plant is expected to bring profits and contribute towards paying off the loan from the EBRD.

But what of the local residents and waste pickers? 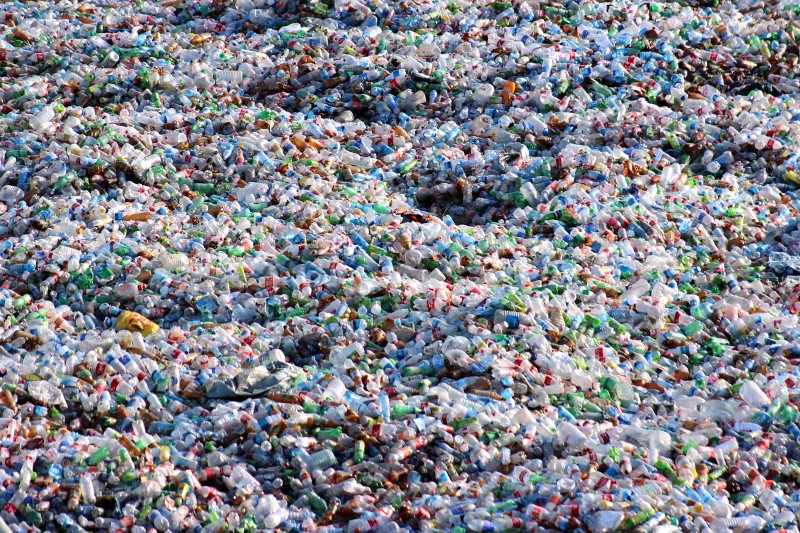 Since the new plant and the adjacent facilities will be constructed near the current dump and require more space, up to 100 informally built houses in the immediate proximity to it will need to be demolished. Local residents, as well as waste-pickers, will be forced to leave the site, to make way for state workers.

As much as local residents disliked the presence of a dump, it provided a source of income and a place to live. If the promised plant is built, their prospects are rather unclear. 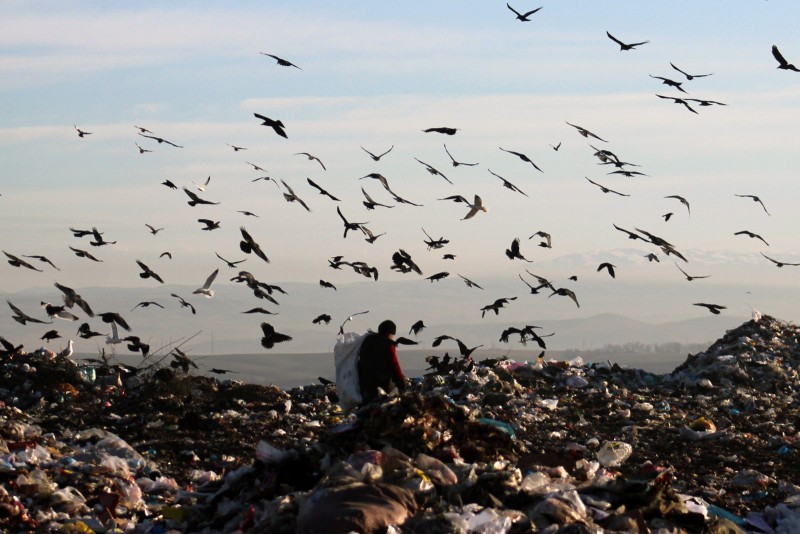 Birds have plenty to pick on at the dump. Photo by Azamat Imanaliev. Used with permission.