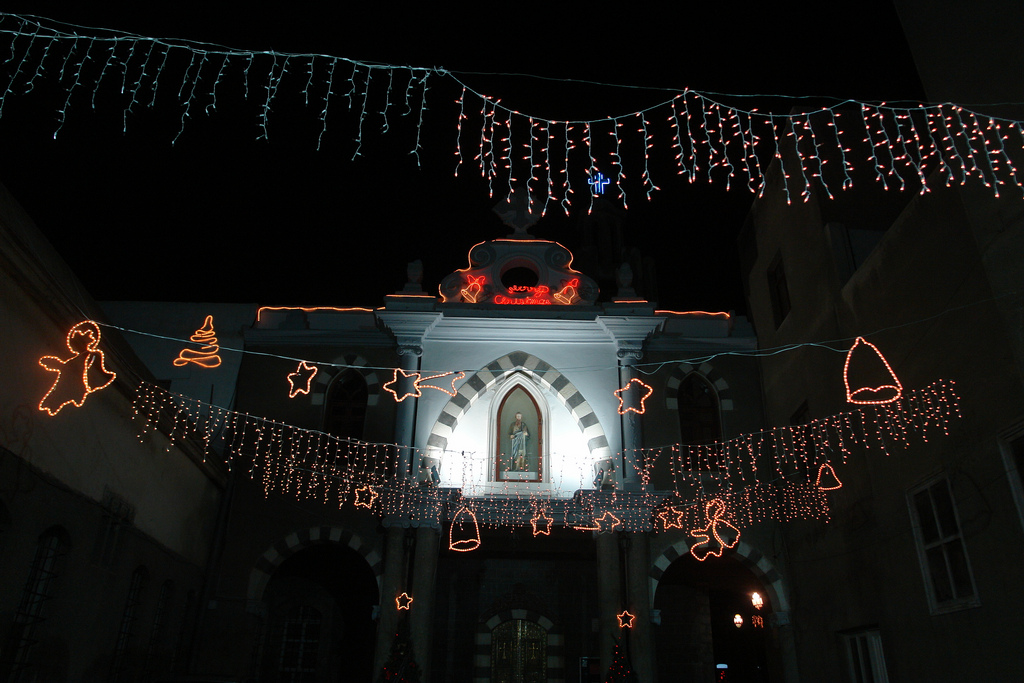 Christmas used to have a special meaning in my family, full of spiritual and familial rituals. As children, my sister Leila and I used to take turns throughout the night watching out for Santa Claus, waiting to catch him “in the act”. I cannot remember clearly when we realized it was a trick played by our parents, or when we found all our letters to him, written over the years, safely stashed away by our parents. Even after growing up and realizing that Santa did not exist, my mother insisted that exchanging the gifts under the tree remain an annual ritual. A ritual that stopped, obviously, after she was gone.

At the beginning of December, she used to ask each of us what we needed, what we wished for, and she made sure that each of us bought gifts for the others. We would spend Christmas morning exchanging gifts and letters, after which I would spend hours upon hours getting ready. The hairdo, the makeup, the new clothes. I kept on buying new clothes—“Christmas clothes”—every year until I was 28. I used to look very colorful at Christmas. My hair would be, contrary to the norm, well styled. I used to practice using different colors on my eyelids. I would even sometimes go all out and draw a butterfly tattoo on my shoulder—“It’s Christmas!” I would then go to mass, followed by a party where Santa would show up and give us balloons and hats, and we would dance to “Jingle Bells”.

When my father died many Christmas rituals disappeared from our household. The tree disappeared, for instance, but my mother retained the rituals of love and gift-giving, as well as her insistence every year that we go out to celebrate with our friends and leave her by herself. Today I regret every time I left her alone, as a teenager, to go out to celebrate with friends.

After my sister’s marriage and birth of her first child, Christmas regained its familial flair and my mother regained her smile. The ritual of decorating the tree was revived and she celebrated with the grandchildren. The number of letters to Santa increased and we all got creative in inventing new scenarios for Santa to show up and distribute the gifts.

Then the revolution started.

The first Christmas is as ordinary as possible. I try to ignore the imminent threat and have an ordinary family Christmas, trying to ease my mother’s fears and wishes for me to stay safe.

The following year it is impossible to ignore all that. My last day in our house is New Year’s. Security forces are already on my trail because of what I was writing, and what some people—people with whom I used to spend Christmas, singing, dancing and celebrating—were writing to the security forces about me.

That day was my last day on the western side of Aleppo which, to this day, remains under Assad’s control, making it impossible for me to go there. I crossed the border into Turkey and re-entered from the liberated side of the city. To make the crossing between the two territories I had to use a fake identity and disguise myself with a head scarf. And to evade the regime's snipers targeting crossers, we had to race between the crossing’s two points. Those were the most dangerous five minutes ever. Crossing, without any goal worthy of this sacrifice except the “memory of the New Year”. Christmas as an act of resistance—I wasn’t going to let them steal my Christmas.

The following year finds ISIS on my tail. It is very dangerous for me, as a Christian, to be in areas where they roam freely, kidnapping revolutionaries, first the Muslims among them. But despite the danger I insist on putting up a Christmas tree at my house. During wartime, there is no place you can easily buy a Christmas tree.

I crossed safely to the other side: a “Christmas miracle”, maybe. And I celebrated Christmas and New Year’s with the friends who loved me so much they took the risk of celebrating with me. I then returned to the liberated part of Aleppo, making that my last visit to my house, to those streets and to Christmas as I knew it.

At the same time that year another miracle happens in my city: my best friend survives a shelling at a new year’s party. I’m still grateful for that. The most beautiful miracle of my life.

The following year finds ISIS on my tail. It is very dangerous for me, as a Christian, to be in areas where they roam freely, kidnapping revolutionaries, first the Muslims among them. But despite the danger I insist on putting up a Christmas tree at my house. During wartime, there is no place you can easily buy a Christmas tree. I had to buy it in Turkey, at a price that I could ill afford then. I wrapped its various parts in clothing and smuggled it all the way to Aleppo. I hid the decorations inside boxes of tissues. Two hours on the road during which I feigned confidence at every checkpoint so that my clothes wouldn’t be not searched and my smuggled tree wouldn’t be exposed.

At an ISIS checkpoint at the city’s entrance a guard asks: “Who is this suitcase for?”

It’s mine. I make a move to open it but the driver answers: “It’s for the woman.”

The guard loses interest in searching it, and I pass safely into Aleppo. Another miracle? I don’t know.

I gather friends around me. Most of them are decorating a Christmas tree for the first time and even though the ritual has no religious meaning for them, they came and stayed around me to share my joy.

Jawad, the weirdest among them, says cheerfully: “Christian feasts are really nice.” And we all laugh.

Ali, my friend in the Free Syrian Army, approaches carrying a gift he wants me to put under the tree. I take it—I’m stunned with terror. A very small assassination pistol. He says: “It’s nothing. Is case they come for you,”—he means ISIS – “don’t let them get you alive.”

The thought is terrifying. It’s terrifying that someone’s love for you suggests your suicide. He realizes that I cannot kill, so he didn’t even try to convince me to defend myself. The pistol was eventually stolen, along with the laptop and other items in the house, and we never needed to use it. A miracle, again.

Today that tree lies in a house in the neighbourhood of Al Sukkari; a house its owner sealed up with bricks before fleeing to we don’t know where.

Maybe this is what Christmas is all about.

To be naïve among the people you love, defying death and loneliness.

To ignore the fact that Santa Claus is really your parents.

To brave the possibility of sniper fire so you can spend New Year’s Eve with friends.

To smuggle a Christmas tree through ISIS checkpoints.

To set goals for the New Year, knowing you cannot achieve them.

To pray from the heart that the doors do not close in the faces of the refugees from your country like they were closed in the faces of Mary and Joseph on Christmas Eve.

To try and find a miraculous way to penetrate an extremely painful memory and paint some love into it.

Maybe this is what Christmas is all about. To be naïve enough to write a letter wishing for “freedom”.