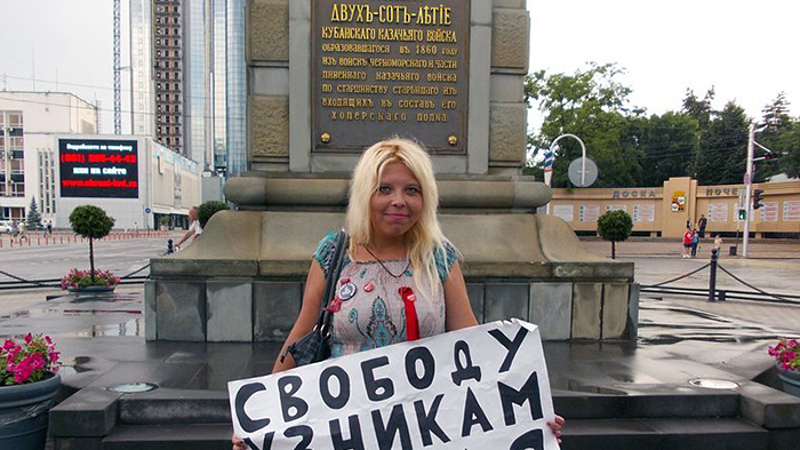 Darya Polyudova at a single-person picket. Image from her VKontakte page.

A Krasnodar district court has found activist Darya Polyudova guilty of “public calls to separatism and extremism” on social media and has sentenced her to two years in a penal colony.

Prosecution earlier asked that Polyudova receive a 3.5-year term, according to an Ovdinfo.org report.

Earlier, Polyudova was charged with public calls to activity aimed at disrupting the territorial integrity of the Russian Federation (under a new article 280.1 of the Russian criminal code, added in 2014), as well as with calls to extremism (parts 1 and 1 of article 280 of the criminal code), including such calls on social networks.

On April 4, 2014 Polyudova went on a single-person picket with a banner that said “Not war with Ukraine, but revolution in Russia! Not war, but revolution!” and later posted a photo of herself with the banner on her VKontakte profile page. On July 16, Polyudova reposted a text on her VK page that contained the words “People, wake up!.. Why can't we remove Putin, and then create a socialist revolution?!!! Enough sleeping! Time to go out to the square and topple this regime!” Polyudova herself says she only reposted others’ words and provided no comments of her own.

On August 5, 2014 she posted another text on VKontakte calling “to fight Putin with his own weapons” and mentioning the Russian Kuban region as a historically ethnic Ukrainian territory.

A criminal case against Polyudova was launched in August 2014, after she took part in the “Kuban Federalization March” protest rally. But law enforcement, as it turns out, took issue with Polyudova's social media posts about the fate of ethnic Ukrainians in the Kuban region. The extremism charges were added on later, and Polyudova was formally charged in January 2015.

The Krasnodar activist spent six months in pre-trial detention starting in September 2014, and was released in February 2015 under a travel ban. She has also previously received administrative penalties for other social media posts.

Human rights advocate Pavel Chikov called Polyudova a political prisoner and said her verdict was part of a trend of harsher sentences against dissenters in Russia that began with Ildar Dadin, who was recently sentenced to three years behind bars for unsanctioned protests.

The court sent Darya Polyudova to a penal colony for two years. Another political prisoner in Russia.

The new articles in the criminal code are getting real prison sentences in the first verdicts. Dadin and Polyudova.

Before the verdict was announced, Polyudova herself told a Radio Liberty reporter that she did not expect to be acquitted and was not afraid of going to prison.