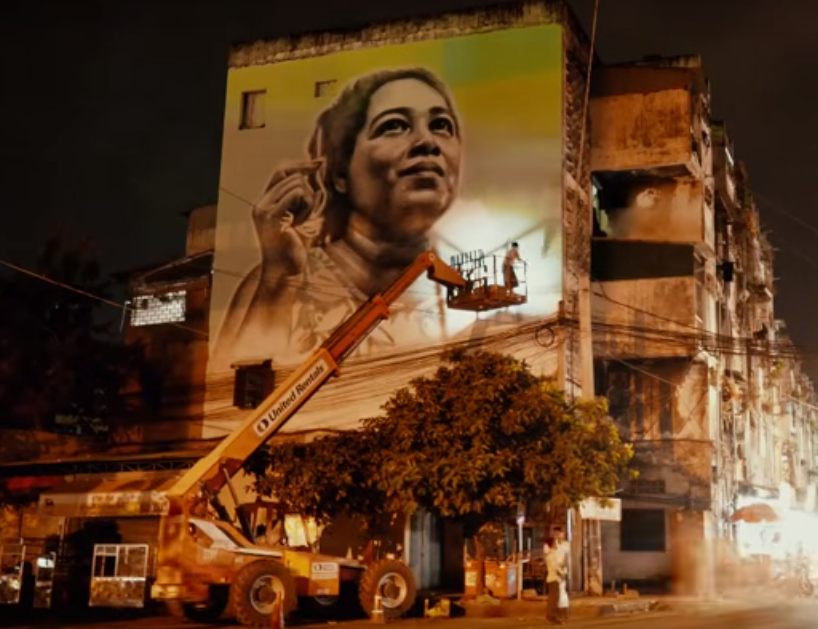 Screenshot of the video showing how artists made the mural in Phnom Penh before it was erased by Cambodian authorities.

Cambodian netizens including the country’s information minister have strongly criticized the decision of the Phnom Penh municipality to erase a large mural painted over a housing tenement known as the White Building because it allegedly lacked permission from City Hall.

The mural was made by American Miles MacGregor, known as El Mac, as part of the Igloo Hong Project which aims to support the work of artists around the world. For his part, El Mac wrote on his blog that he is dedicating his Cambodian project to artists who perished during the rule of the Khmer Rouge regime in the 1970s:

This mural honors Cambodia's artists, both contemporary and those lost during the Cambodian genocide of the mid to late 1970s, when nearly all of the country's creative population was targeted and murdered by the regime.

He felt privileged that the mural will be painted over a building where many artists and artisans are currently living:

Since I had the opportunity to paint such a large, visible wall in a place where there are seemingly no other large scale murals like it, I felt an extra sense of responsibility to paint something beautiful, meaningful, and uplifting.

I hope this mural can serve as a respectful tribute to the importance and perseverance of Cambodia's creative legacy, and possibly, in some small way, offer inspiration for younger Cambodian artists to sustain this legacy.

Handmade #diy gets rarer and rarer these days , one day in Cambodia while walking across the roof of this old apartment building looking for spots to paint , we came across this surreal scene of a woman who had a mat outside on the roof with broken tiles and black mold everywhere hand sewing the most intricate #shawl next to a pile of stacked tiles painted like #batman, we talked to her and she let us paint the outside of her apartment , I bought the shawl for my mom , I guess there's only 2 people left in #phnompenh that do this type of detailed sewing craft, everyone else just uses a hot glue gun , anyways the apartment building was old and hadn't been renovated since the 50's , so @mac_arte did this amazing portrait of the woman who made the shawl , on the side of her building so she and everyone can see it everyday , we pay respect to her craft and honor her hard work #workHarder #tryharder #igloohong @davidchoe2 @esao @jamesjeanart @mr_aryz @jaworskijason @d_maddux @mattrevelli @pacoraterta

Unfortunately, City Hall immediately ordered the removal of the mural since El Mac and his team allegedly proceeded to paint the mural while their application for the right to was still being processed. A spokesman of the local agency added that the application didn’t get the approval because the mural was not completed in the Khmer tradition while the subject (Moeun Thary) was not well-known. The official advised the artist to depict a Khmer hero, instead.

And it seems City Hall is also ‘whitewashing’ other street art projects:

#Cambodia #streetart on Street 830 being whitewashed away by government-approved artists. @Poximity pic.twitter.com/MmLseXI0z5

The whitewashing of the mural shocked many Cambodians who appreciated El Mac's work. Even Information Minister Khieu Kanharith urged the local government to praise the artist instead of removing his mural

Many Internet users commented that Phnom Penh is littered with large advertising billboards of alcohol drinks but these are not being removed by the local government. Some even suggested El Mac should have inserted an image of a beer into the mural so it would not be defaced by authorities.

On Facebook, Graffiti Cambodia described the action of the local government as an attack on public art:

The Cambodian government is sending a clear message that public art will not be tolerated. Either that or they just spat out their dummy in the most fastidious way possible.

…on one hand, I don’t approve of what City Hall did because it’s art and everything, but on the other hand, they didn’t have the authorizations. I’ve been in Cambodia long enough to understand the rules here, and we are really trying to play by the rules here.

Although the mural is gone it ‘survives’ on YouTube: