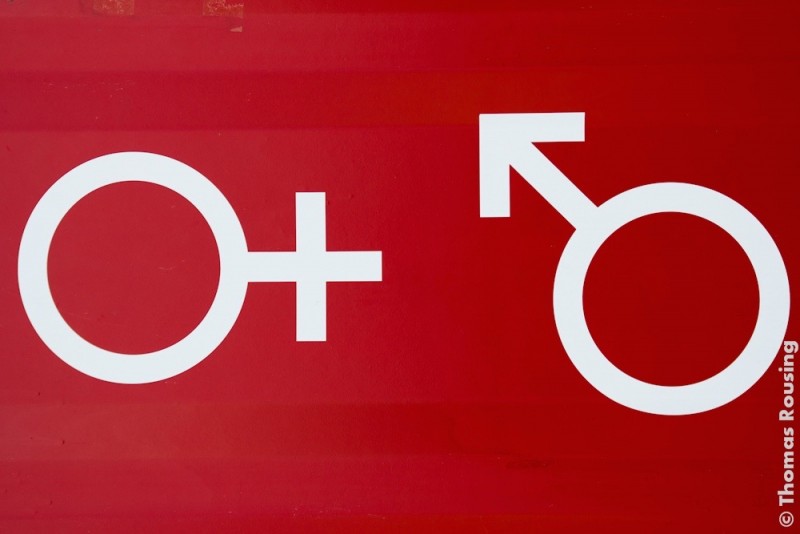 The female and male symbols. image by Thomas Rousing, used under a CC BY 2.0 license.

A protest was held December 18 outside a club in Trinidad and Tobago's capital Port of Spain to decry body policing and gender discrimination after staff there refused to admit a woman they deemed too masculine-looking under a “Ladies Free” policy last weekend.

But the decision to bar Shannon Gomes from entering the Aria Lounge nightclub for free on December 11 and the subsequent protest staged by feminist group Womantra has raised a host of other questions.

Are free entry for women policies not inherently discriminatory against men? And don't they reinforce negative gender stereotypes? Or was the way in which Gomes was judged at the door of a popular nighttime venue particularly important because it symbolized broader gender discrimination on the island?

On December 11, Shannon Gomes turned up at the Aria with her lady friend to “turn up”, only to be told at the door that she would have to pay $120 for the pleasure. Or, to put it another way, she was charged the “men’s price.”

Gomes is, biologically and legally, not a man. But her pleas for a freebie fell on deaf ears. And she was asked to pay to enter Aria, just like the hundreds of men who also went to the club that night.

Womantra has vowed to fight for Ms Gomes’ right to not be treated in the same discriminatory manner as male patrons. A feminist group insisting that a woman not be treated as equal to men? Irony? What irony?

Wired868 later clarified that the nightclub's entry policy represented “a stereotype that cuts both ways: women are cheap or need hand-outs and men are lust-driven idiots with big wallets.”

Womantra's blog attempted to clear the air in a post that detailed what the issue was and was not about. The organisation claimed that it was not about gay rights, men's rights, or paying to get into a club.

Instead, the group saw the refusal to allow her free entry as an instance of gender-based violence:

It is no one's right or business to make suppositions about a person’s sexual orientation and gender identity. […]

To be chastised in any way for not conforming to an ideal of gender is violent behaviour; this includes the imposition of strict dress codes for women and prohibition from public spaces. The effects of punishment here are perhaps less tangible or visible, but harmful stereotypes are perpetuated and real harm inflicted on those who do not conform.

When it comes to gender expectations, we can all empathise. Think of any time you were pressured into being a version of your gender that you did not identify with. How did that make you feel? Inadequate? No one should be made to feel less than how they choose to present themselves to the world.

Still, Facebook user Nigel Thompson couldn't believe that a formal protest was being staged over the incident:

Now hearing a women's group going to protest outside Aria. Not sure if that's true but if it is, Allyuh eh have nothing to do? Yuh know what, I'm going to hire a man and a woman to paint my house, I'll be paying the woman less. Come and picket my house, bring a power washer. Allyuh may as well help me out for Christmas.

In a telephone interview with Global Voices, Thompson went on to ask why there weren't any protests over the regular infringements of women's rights in the public health care system, where mothers and their babies often die because of lack of proper care or due to medical negligence.

“People's priorities are seriously skewed in this country,” he said. 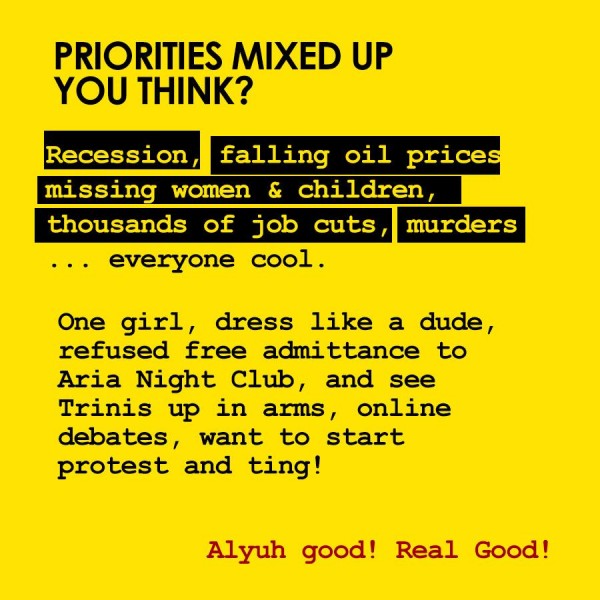 Other Facebook users made the case that by focusing on the discrepancy between letting women in for free and having men pay, people were missing the point.

In one thread on the topic, Georgia Popplewell shared her take on the issue:

An incident occurred that, to me, was plainly discriminatory: a woman was told that she didn't qualify as a woman on account of what she was wearing.

I'm not at all surprised at the the trajectory of the discussion that's followed—the questioning of the woman's motives, etc, the ‘Je Suis Shannon’, etc—because that is how it goes.

But I do find the attempt to hijack the discussion of an important topic that's rarely addressed in this country—gender expression—and turn it into a discussion about the dismantling of a time-honoured club and fête policy about which nobody has been particularly vocal till now, totally disingenuous.

Not all discrimination is created equal, and not all unequal treatment is necessarily discriminatory.

Feminist blog Code Red also made an insightful comment on the sexual politics of ‘free entry':

Nightclubs that advertise ‘ladies free’ are actually using women as part of the experience they are selling to (heterosexual) men whom they perceive as their legitimate customers. This is the reason men are expected to pay and ‘ladies’ are admitted ‘free’. It is neither an act of feminist benevolence nor discrimination against men that club owners have such policies. Such policies aid in heterosexualizing public spaces and reinforcing the notion that ALL women should be sexually available to men. These clubs with their dress codes, including the requirement that women wear heels, seek to reinforce a heterosexualised femininity, regulating gender and sexuality and often discriminating based on class, colour and size. Women can collectively challenge this hetero/sexism and classism by refusing to patronize such clubs and organising our own forms of entertainment and community building.