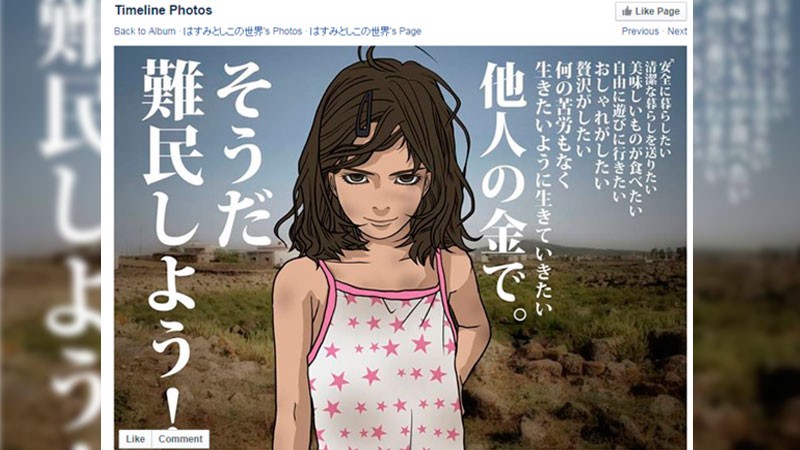 Text: “I want to live a safe and clean life, eat gourmet food, go out, wear pretty things, and live a luxurious life… all at the expense of someone else. I have an idea. I'll become a refugee.” Source: image widely shared on social media.

Though Internet users only recently debunked a false English-language meme about Japan's alleged restrictions on Muslims, it's far from true that Japan necessarily welcomes immigrants and refugees with open arms.

In fact, following widespread global media coverage last fall of the flow of refugees from Turkey to Greece and then into other parts of Europe resulted in Japan's own particularly nasty viral meme about the crisis.

A cartoon shared widely on Facebook in Japan in September and October accuses refugees of “faking” their plight. The poster contains the cartoon image of a young girl, with the caption: “I want to live a safe and clean life, eat gourmet food, go out, wear pretty things, and live a luxurious life… all at the expense of someone else. I have an idea. I'll become a refugee.”

This meme about refugees is being shared on Facebook. I can't believe it. If you see it being shared, make sure you alert Facebook.

The image was created and uploaded by cartoonist Hasumi Toshiko. While the message was shocking enough in terms of its utter lack of empathy towards the plight of refugees, who are fleeing war and insecurity, Hasumi also decided to base his drawing on a real picture—one taken by photographer John Hyams of a young Syrian girl, which was used for a Save The Children campaign.

Shocked+deeply saddened anyone would choose to use an image of an innocent child to express such perverse prejudice http://t.co/JfXeuQAWAE

Following a request by Hyams and a petition reportedly signed by more than 10,000 people in Japan, Hasumi removed the image.

The case of Hasumi Toshiko demonstrates that while Japan is generally an open and tolerant society, Internet culture in that country can be just as insensitive and downright corrosive as anywhere else, if given the chance.

On the other hand, others argue that, no matter how tolerant Japanese society is towards Muslims and other minorities, when compared to other wealthy countries such as Canada and Germany who have committed to accepting refugees, the Japanese government is equally committed to putting up roadblocks to keep refugees out.

Japan receives far fewer asylum seekers than other wealthy nations. In 2013 Australia received 24,300 people seeking asylum, and Germany received 109,600. In contrast in that same year Japan accepted just 3,300—and very few of these people would be formally accepted as refugees.

In 2014 Japan received 5,000 applications for refugee status, but the country's Immigration Bureau ruled only 11, or just 0.2%, of the 5,000 applicants to be worthy of recognition and asylum as refugees.

In fact, Japan is often called “a country with a closed door for refugees.“

There is no time framework set forth for the administrative procedures of refugee recognition, and there was such a case as taking 9 years (!) to reach a final decision?

There is little formal support for the 12,000 or so people seeking asylum in Japan, who are prohibited from working while waiting for a decision about whether or not they will be accepted by the authorities.

It's often observed Japan would prefer to deal with refugees at a distance, through financial aid. According to the United Nations High Commissioner for Refugees, Japan was also the second largest contributor to the UN refugee agency in 2014, donating more than $181 million.

What does birth rate have to do with it?

Abe also explicitly stated Japan's opposition to accepting more refugees. In a Japanese-language press conference (Part 1, Part 2), he not only shut the door on accepting more refugees, but also tied refugee settlement with immigration policy, saying, “Before accepting immigrants or refugees, we need to have more activities by women, elderly people – and we must raise our birth rate.”

The reply, at the UN headquarters in New York, struck some as odd, because it seemed to conflate Japan's plummeting population with the refugee crisis.

In any event, since Japan, due to its geographic location, is relatively isolated from conflicts around the world, it may be difficult to persuade a majority of Japanese people that more must be done to accept refugees. And it's difficult to determine how much support there is in Japan for accepting more refugees.

What do you think about Japanese policy of not accepting immigrants?

We should restrict immigration.