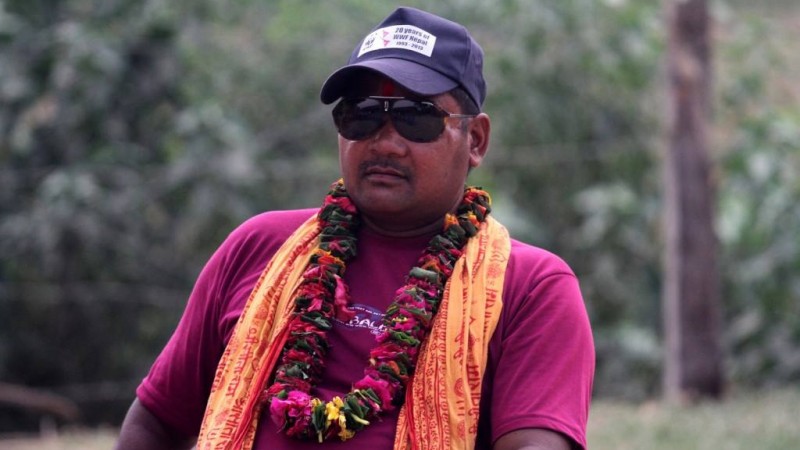 Bardia National Park, Nepal’s largest park in the southern plains, is famous for Bengal tigers. Connecting the park with India’s Katerniaghat Wildlife Sanctuary in the south-east is the Khata corridor, which offers a free passage to wild animals from India to Nepal and vice versa.

The Khata Community Forest Coordination Committee plays a crucial role in managing and protecting the corridor. One of the active members of the committee is Bhadai Tharu, a man so committed to conserving tigers that even a tiger attack didn't dissuade him from his personal mission.

Bhadai Tharu, the Tiger Man… Who fought a tiger and now fights for the tiger… #Hero praised by @LeoDiCaprio http://t.co/MeqLjC3FG4

One of his eyes was ripped out by a tiger when he was inside the park during kharkhadai in 2004, a period spanning over three days when the park authorities allow locals to enter the park to cut grass for their annual use. People use the newly cut grass to change their thatched roofs each year, as well as make fences to keep animals out of their fields.

To cover the deep scars from the unfortunate incident, he dons a pair of dark sunglasses all the time. But they aren't just any old sunglasses: the shades were given to him by American actor Leonardo DiCaprio.

When DiCaprio was visiting Nepal in May 2010, he gifted Tharu the sunglasses that he was wearing after seeing the man's commitment towards tiger conservation. The two ended up spending a significant amount of time together.

“Wild animals have full right to the jungle.” Meet Bhadai Tharu, of of the many people helping to #ProtectATiger: http://t.co/JE90ZWEMO9

In an interview with the Dreams magazine, Tharu said:

“We talked about my past, and then he told me he had heard a lot about me and seen my pictures. It was one of the proudest moments of my life, as I recognized him as the hero from Titanic, the one with the girl on the boat.”

Tharu, who rose from the ranks of a landless bonded labourer to a conservation hero, was awarded the Abraham Conservation Award in 2004 in recognition to his contribution towards conservation. Here is him singing a conversation song in his local Tharu language:

‘India’s tiger comes to Nepal,
Falls in love with Nepal’s tiger.
Let’s not break their love,
Let’s not obstruct the wildlife corridor.’

Once, a bonded labourer for 11 years, Bhadai Tharu of Suryapatuwa-4, Bardia, sings this song these days. […]

[…] “At first I felt like searching and killing the tiger that attacked me, but then I thought it might have attacked me to save itself from the lurking danger,” said Bhadai. “That’s why I have been engaged in conservation of tiger habitats.”