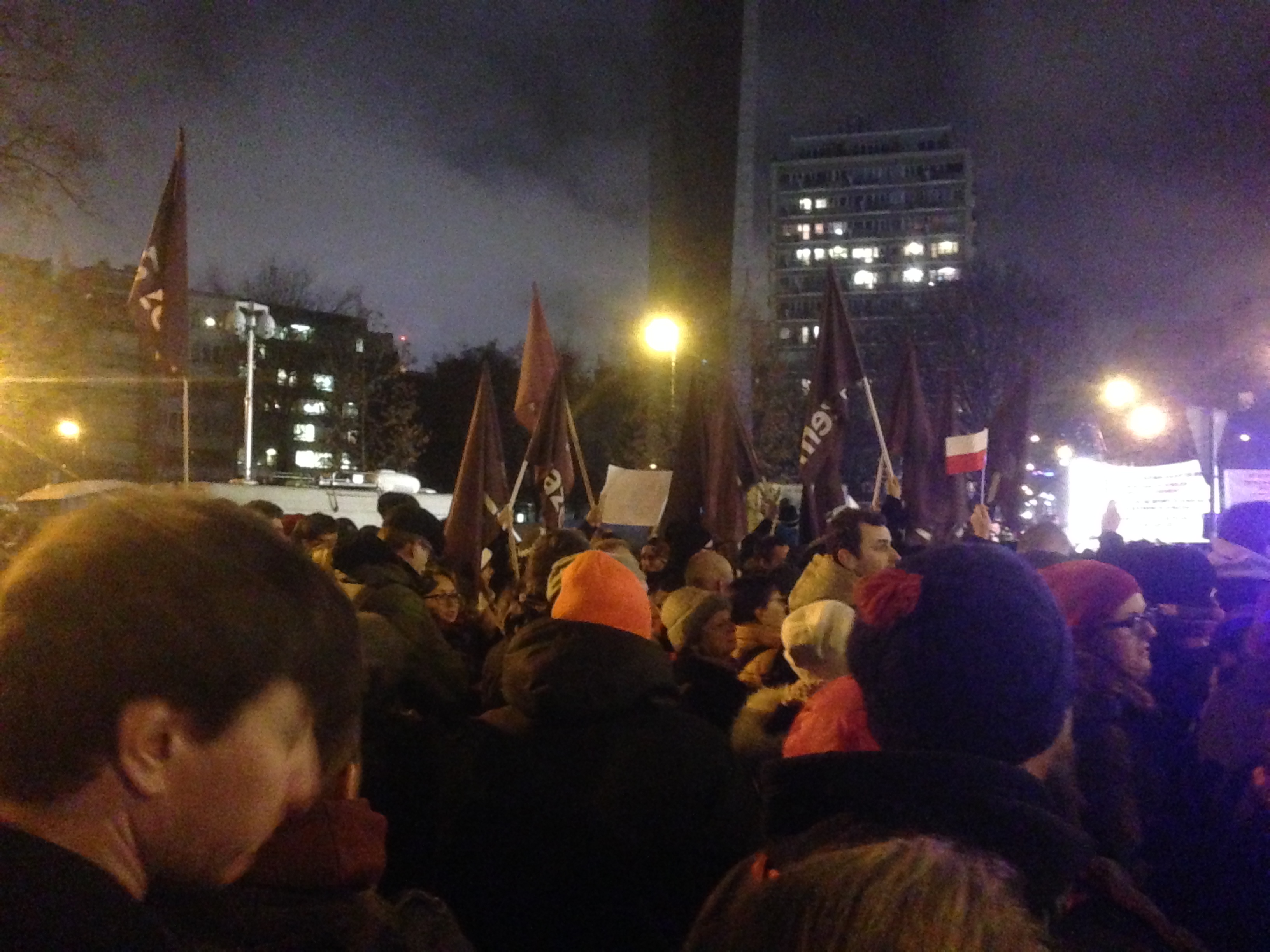 Protest in front of the parliament building. December 2, 2015, Photo by Anna Gotowska, CC 2.0.

Recent political developments involving the Polish Constitutional Tribunal have brought about a spectacular national controversy. The tribunal—an institution designed to guarantee the rule of law, as well as statutory laws’ compliance with the Polish Constitution—has been largely immobilized thanks to the newly elected government's legislative actions. This, at least, is the way the story has been portrayed by Poland's mass media, and by some foreign journalists, too.

On the other hand, there is also evidence that the abuse of the laws regulating the tribunal, as well as the practice of questionable political appointments to its bench, is no innovation of the Law and Justice Party (which controls Poland's new government).

Unfortunately, these issues have a longer history, and today's controversy is in many ways its mere culmination.

With the Constitutional Tribunal suddenly a top news story in Poland, its inner workings are the subject of a debate that was previously less public and reserved more for journalists and lawyers.

This is how Google searches for “the Constitutional Tribunal” looked like in the last 24 hours. Poles are not sleeping :)

During the tribunal's latest hearing on December 3, its official website crashed because of unusually heavy traffic, as people flocked to live-stream the proceedings.

“Due to an unexpected spike in traffic, the website is overloaded. Live transmission can also be seen here….” Photo by Anna Gotowska, December 3, 2015. CC 2.0

Over the last couple of years, politicians, lawyers, and judges have also discussed the possibility of changing regulations on Poland's Constitutional Tribunal. The law setting down these regulations came into force in 1997. Since then, legislators have recognized the need to revise some procedures, in order to improve and expedite the tribunal's various processes.

A draft law, proposed by the Civic Platform Party (which led Poland's previous government), would shorten the time of examination of complaints and create combined investigations for cases involving similar topics.

In 2013, then President Bronisław Komorowski, previously a member of Civic Platform, used his authority to propose the new bill. Lawmakers in the Parliament's lower and upper houses debated amendments to the legislation heatedly, but one amendment stood out in particular—the same one that's become the center of today's conflict.

Just ahead of the 2015 elections, on June 25, after two years of legal consultations, the parliament finally passed the new law regulating the Constitutional Tribunal. One of the changes—a transitional provision—stipulated the obligation to elect new judges “no later than thirty days before the end of term of office of the judge stepping down.” The timeline in this stipulation was nothing random.

The terms of five judges were about to end during the last days of Civic Platform's governance, making way for the Law and Justice Party to take charge of the government on November 16, 2015. Three of those judges were due to step down on November 6, and another two would leave on December 6 and 8. Deviating from standard practices, and inviting accusations of political maneuvering, Civic Platform decided to nominate all five judges, instead of just three.

The legal community is now more than eager to contest the current law on the Constitutional Tribunal proposed by Law and Justice, but what were they doing in June, when Civic Platform voted on its law? Sleeping?

Dr. Zukowski in TVP [Polish Public Television] speaks quite wisely now. He says that in free Poland, the Constitutional Tribunal was always pluralist, and it was only in June that Civic Platform aimed to change that with its new law.

This decision triggered a series of events that's put the tribunal in even greater danger of becoming a political tool for all sides.

First, President Andrzej Duda, previously a member of the Law and Justice Party, refused to swear in three of the judges appointed by Civic Platform (whose terms of office were to begin in November). The oath taken by the president is a formality, however, and it is not within the president's powers to decide the appointment of judges to the tribunal. Nevertheless, approval by the president is de facto a necessary formality that allows appointed judges to take their rightful place on the tribunal.

As a result, three judges who were set to take office on November 6 did not receive the newly elected president's approval, despite being appointed legally by parliament.

On November 19, the Law and Justice Party introduced and passed a new amendment, further reforming the regulations on the tribunal. Without a broad public discussion or extensive consultations with legal authorities, the parliament sent the amendment to the president, who signed it within 48 hours.

Shortening (from three months to seven days) the period provided for proposing new candidates for vacant tribunal positions, the new amendment makes it virtually impossible for the public to discuss or get to know the candidates. It also officially makes taking office dependent on approval from the president, thus binding the offices of judges with the president's decision, thereby violating the tribunal's constitutional independence from the executive branch.

The most controversial change of all forces the tribunal's sitting judges to leave office an entire year earlier than before. (This reform is thought to target the president and vice president of the tribunal, in particular.) The amendment is not only retroactive, but also introduces a precedent that the parliament has the right to meddle in the tribunal's internal affairs.

Critics of these moves see the entire amendment as a scheme to replace the previous parliament's five appointments with five new ones of its own.

Time showed how deeply Civic Platform was mistaken when trying to take over the tribunal. It's a classic boomerang effect.

By this time, Civic Platform, slowly realizing the consequences of its own earlier actions, challenged its own law from June in the Constitutional Tribunal, in hopes of solving the issue by appealing to the judiciary.

In the night between November 25 and 26, during a special session, Law and Justice's representatives passed a new act in parliament, stating that all five judges appointed in October were elected illegally. This, again, parted with standard procedures, as the Constitutional Tribunal itself is charged with reviewing such matters, not the parliament. As a symbolic protest, Civic Platform's deputies walked out of parliament.

This is how Marcin Piotr Kowalczyk summed it up:

Parliament, Constitutional Tribunal, Law and Justice are as fast as a storm—no shame. What more will happen tonight? It will be scary to wake up in the morning.

After the controversial decision, many Polish legal authorities, along with some judges from the Constitutional Tribunal, pleaded for an end to all the hurried legislation, hoping to postpone further reforms until a tribunal ruling scheduled for December 3.

But the parliament's majority refused to wait and, on December 2, during another special overnight session, lawmakers appointed five new judges to the tribunal, to replace the individuals appointed by the Civic Platform-controlled parliament earlier this year. President Andrzej Duda then immediately swore in four of these new judges.

With the previously appointed judges refusing to leave, the tribunal now had 19 people to fill 15 spots. As parliament deliberated overnight, demonstrators gathered outside in clashing rallies for and against what was happening indoors.

To many supporters of the reforms by the Law and Justice Party, protesters seem to be detached from Poland's reality.

The protest in front of the parliament was supposed to start at 7.30 p.m. Are the foodtrucks with Thai food and soy latte for those 50 protesters already there?

Some wanted the protest to be apolitical, defending democratic standards. K_Szymielewicz tweeted:

At 5.30 p.m., a civic protest in front of the parliament building. A voice not against the ruling but in support of democratic standards.

Loud protest in front of the parliament building. Liberals are the majority.

Some protesters were part of Poland's new left-wing party Together. Mateusz Dolatowski wrote:

Slogan from the protests by the parliament: “Rule of law, now of Law and Justice!” #Together 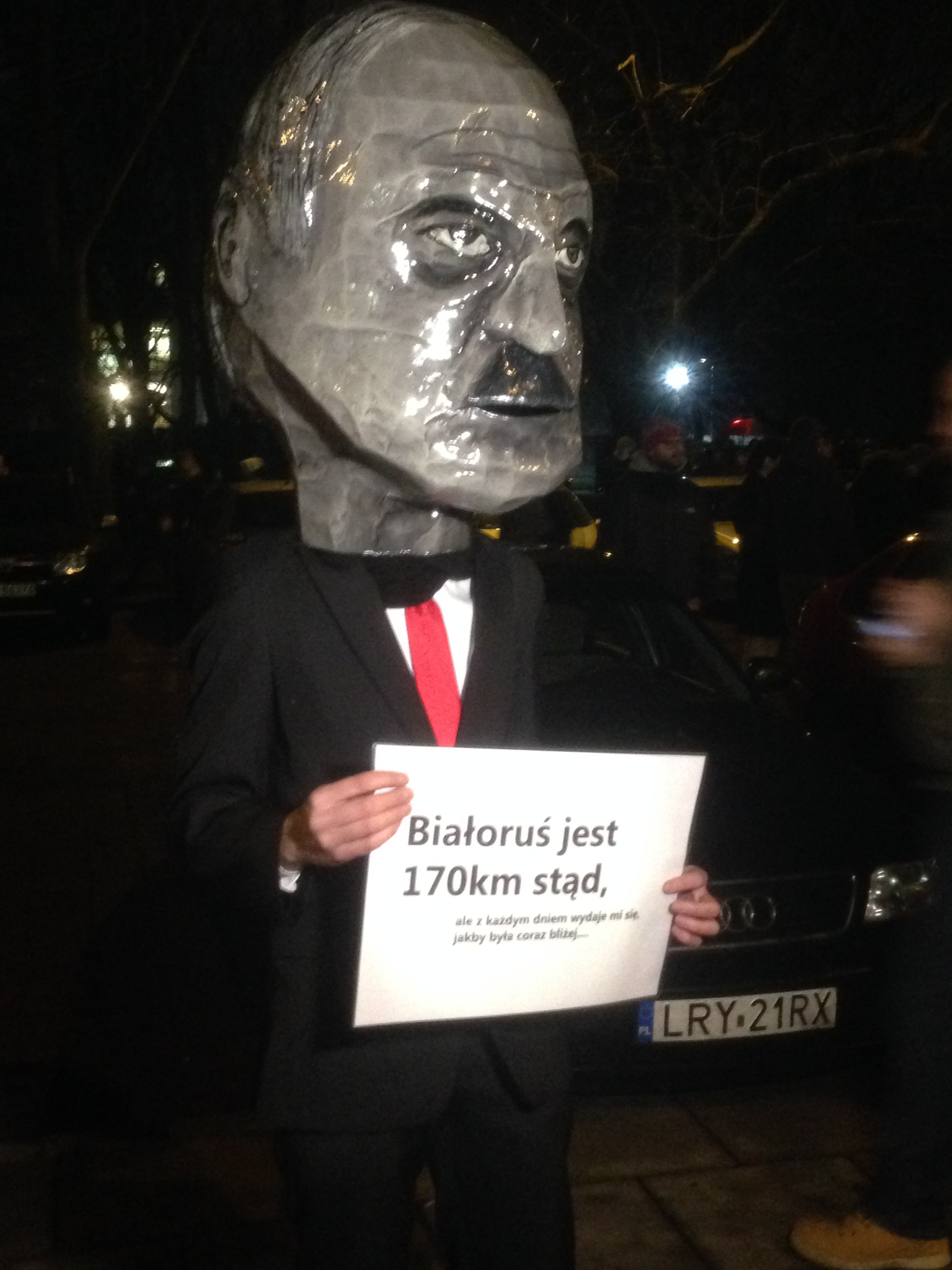 The tribunal has its say

On December 3, Poland's Constitutional Tribunal issued its ruling, finding that the Civic Platform's law was “partly unconstitutional.” According to the tribunal, three of the judges appointed by the previous parliament in October were chosen lawfully, but two others (who were supposed to begin their terms in December) were appointed based on an unconstitutional transitional provision. In other words, the tribunal rejected two appointments by the old parliament, when it was still controlled by the Civic Platform Party.

Although it is stated in the Polish Constitution that the tribunal's rulings are final and indisputable, various groups are avoiding compliance with this decision, like others before it.

I wonder if the CT's [Constitutional Tribunal's] ruling will be acknowledged by Chairmen Jarosław Kaczyński [the leader of Law and Justice and supposed mastermind behind the party's strategy].

It's funny that the ruling in case of CT is being given by the guy who still has got in his trunk leftover leaflets from starting in elections from Civic Platform's lists [an allusion to the notion that tribunal judges support Civic Platform].

The extent of the downfall of clowns from the Constitutional Tribunal. CT ruled that its own president and vice president wrote an unconstitutional law for Civic Platform. Do you get it?

Later on December 3, President Andrzej Duda addressed the nation. During his speech, he declared his willingness to discuss the issue further, though he didn't once mention the Constitutional Tribunal's ruling from earlier that day. 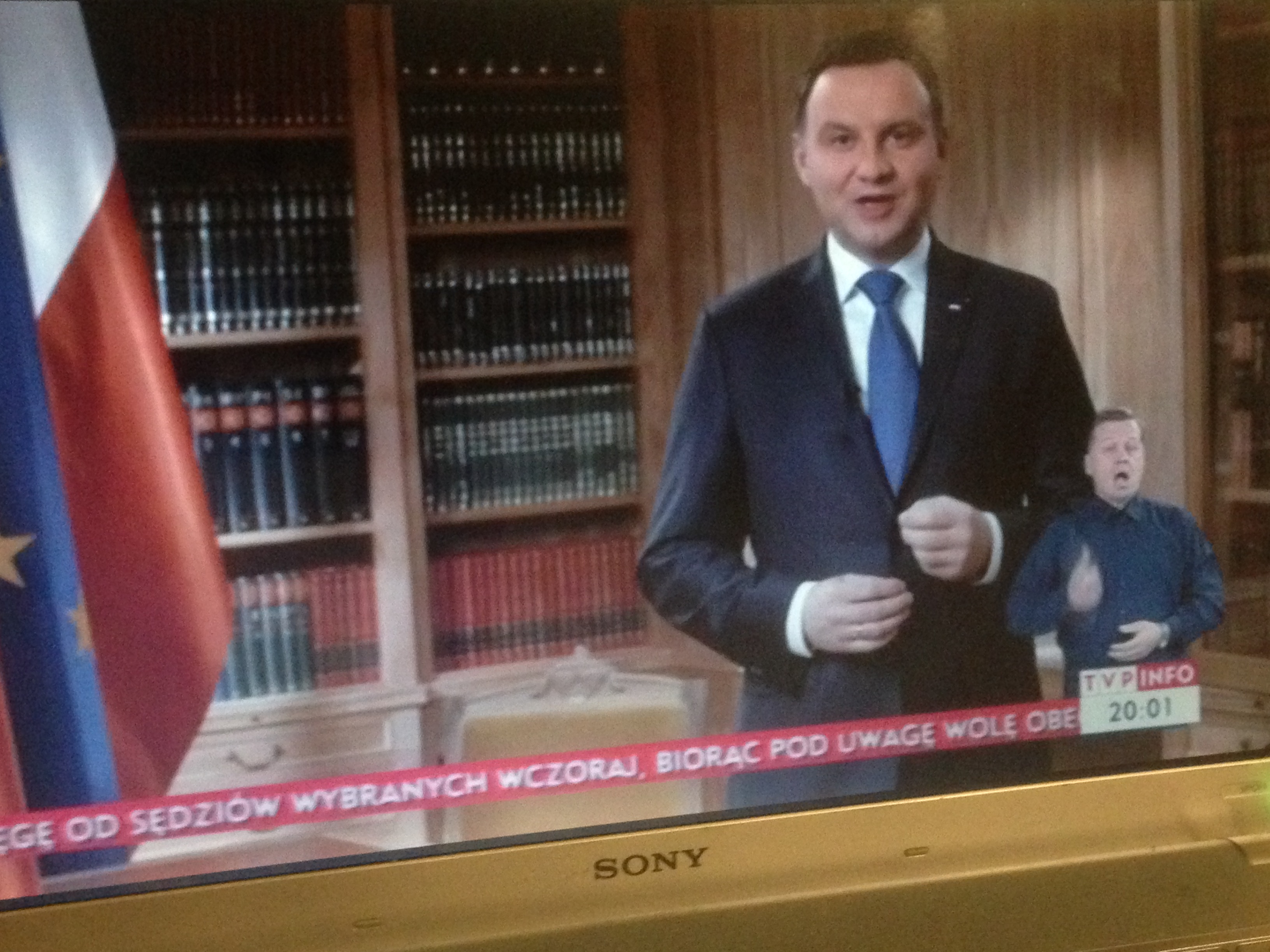 Ola Karasińska commented on the speech:

President Andrzej Duda never mentioned the ruling given by the CT. It can be deduced that he won't swear in the three judges and that he questions the ruling of the CT.

President Duda still ignoring the ruling of the CT. In the end, according to Law and Justice, it
is only a matter of opinion.

The secretary general of the Council of Europe issued a statement on December 3, saying, “I welcome yesterday’s decision by the Constitutional Tribunal of Poland which clarifies the legal and constitutional situation. This decision now has to be fully implemented in all its aspects.”

On December 9, the tribunal ruled that the Law and Justice Party's legislative efforts to replace Civil Platform's tribunal appointments were, almost without exception, unconstitutional. The tribunal's rulings haven't entered force yet, however, as they need to be published in the official Journal of Laws before the state is required to do so. On December 11,the spokeswoman for the prime minister's office announced that the rulings won't be published, as the tribunal was missing three judges when it reached the rulings—an impossible requirement, given that the president has refused to swear in these individuals.