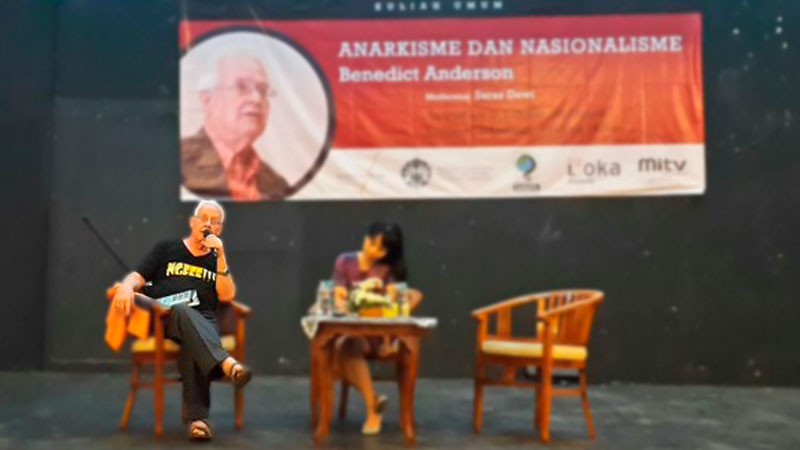 Benedict Anderson delivering a lecture in Indonesia. Photo from ‏@BSL_Forum.

Professor Benedict Anderson, author of the book “Imagined Communities” and an expert on Southeast Asia at Cornell University, passed away on December 12, 2015,in the Indonesian city of Malang in East Java.

Anderson is best known for “Imagined Communities,” which addresses the rise of nationalism and how it's shaped world history. Less famous but highly respected is his research on Indonesian culture and history.

In Indonesia, Anderson is famous for coauthoring an essay that challenged the government's narrative about mass killings in 1965. The 1971 Cornell paper, titled “A Preliminary Analysis of the October 1, 1965, Coup in Indonesia,” debunked claims by Suharto's “New Order” regime about why a massive and bloody anti-communist purge took place between 1965 and 1966. Suharto blamed the communists for staging a failed coup, which he says forced the army to retaliate. The purge claimed at least half a million lives, the majority of whom were suspected communist sympathizers.

Because of the paper in 1971, Indonesian officials refused to let Anderson back into the country for the next 26 years. He finally returned in1998, when the Suharto regime fell.

In a recent interview with “Loka Magazine” (World Magazine), Anderson talked about his upcoming autobiography, his observations on young Indonesians, and his thoughts on Indonesian studies.

Thanks to his long and extensive scholarly work on Indonesia, Anderson inspired several generations of academics who look up to him as “Pak Ben” (Sir, or Father, Ben). Some of his former colleagues shared loving tributes on Facebook:

For example, Sandra Hamid recalled one of Anderson's recent lectures in Indonesia:

RIP Ben Anderson. One of his last messages from
the widely attended public lecture in the University of Indonesia, just last Thursday: you can be a nationalist AND be ashamed of your country.

Listen up, Indonesia!;
listen up, USA!; listen up, Australia!

Through Ben Anderson, we learned to question the New Order's version of history. Through Ben, we learned that high ranking army officers were never tortured [by communists].Thank you and so long, Ben.

My condolences for the passing of Indonesian Expert Ben Anderson. Imagined Communities is a must read for the current generation.

We can agree or disagree about his conclusions, but his data and arguments always managed to move our hearts and minds. Thanks!

His final lecture at UI [University of Indonesia] on December 10, 2015.

RIP Ben Anderson, may you find your rest in your beloved homeland, thank you for your work.