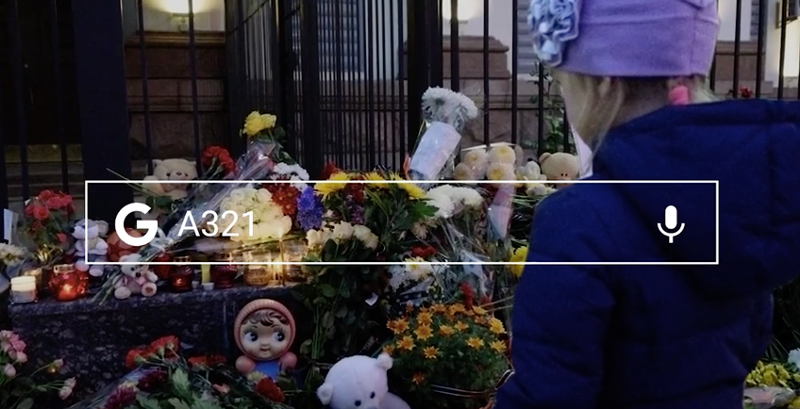 The A321 plane crash was among the top events Russians searched for on Google in 2015. Screenshot from YouTube.

During the past year, Russian Internet users cheered on Eurovision and hockey, but also mourned prominent Russians who passed away and followed the tragic events in Egypt and France, according to Google search data.

As part of its annual Year in Search report, Google gave an overview of the most popular search queries on the RuNet.

In a short video, Google Russia offered a bird's eye view of the most frequently searched items on the Russian Internet in 2015.

Google also provided some charts of top trending items that Russians took an interest in during the past year.

Top events of the year included Eurovision and the World hockey championship (where Russia won silver), as well as the solar eclipse and the 2015 Oscars. Sadly, many of the year's top events were tragic ones: the A321 plane crash and the terrorist attacks in Paris also made the list.

Russian users were most curious to find definitions of or more information about things like ISIS (aka Islamic State), Leviathan (the hit Russian film that also won a Golden Globe), and the #PrayforParis hashtag, among others.

Top searches for personalities included several prominent Russians who passed away in 2015 or earlier, including pop star Zhanna Friske, politician Boris Nemtsov, ballet legend Maya Plisetskaya, actor Lev Durov, and film director Eldar Ryazanov. But Eurovision participant for Russia Polina Gagarina also got her cut of fame and ended up in second place among most searched individuals in Russia.

Top searches for popular memes in the RuNet included the Carl meme from The Walking Dead series (which Russians took to with gusto), the “what color is the dress” meme, and the hardly translatable “Ничоси” meme born on the Russian VKontakte social network.