A Year on From the Peshawar School Attack, the Wounds are Still Fresh 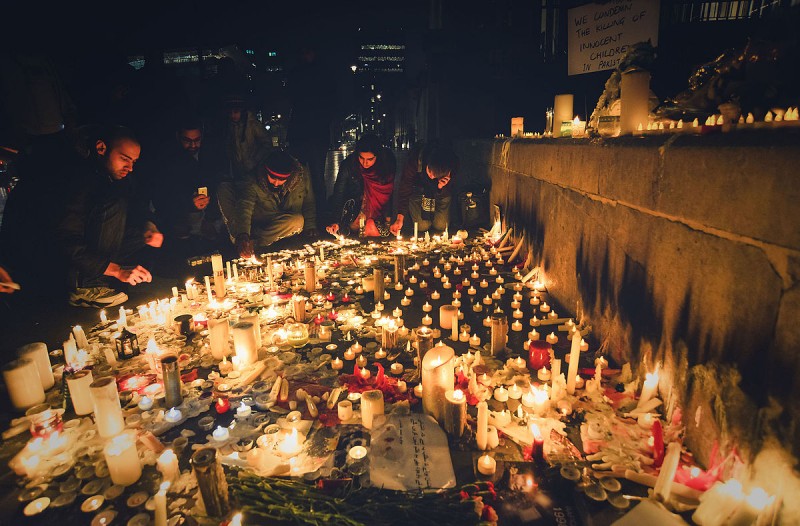 A year ago, my daughter Hira told me about a dream she had. She was the only child left in her school. All around her was silence, as she hid behind a slide in the blood-stained playground, except for the creaking of a swing, as if someone had just left it. Her breath came in rapid puffs of vapour; it was cold, for the sun seemed to have been half swept away by a terrible wind. The grass beneath the thick splatters of blood seemed leached of colour, frosted, almost. She didn’t know where everyone had gone, or what she was running from. A nameless, shapeless terror was stalking her school..

She told me about this dream a few days after I returned from Peshawar. I had not been there to comfort her because I had been reporting on real stories of horror and terror on December 16 and afterwards. I could only offer her a few words of comfort and security, cold comfort, as meaningless as the hangings, military operations and rhetoric against militants and militancy are for the parents who lost their children in the most brutal way possible at the Army Public School on December 16, 2014.

This year, I am too ill to report on the year that has passed. I cannot ask questions about why children needed to die before the country could understand the cost of our follies of strategic depth, or whether the Taliban are monsters. Good Taliban, Bad Taliban? It is like the Syrian child washed up on a European shore, or the Sudanese child being stalked by a vulture. The world does not awaken until children are dead. The world is not outraged until the images of small corpses are repeatedly broadcast and printed.

Oh, those tiny coffins. At the hospital in Lady Reading, the emergency ward was reeling with the injured, the shocked, the relatives desperately crowded around lists of the dead. And the doctors went about their business like zombies, unable to cope with the pain but by working. In a room to the side, the small coffins were stacked one on top of the other, waiting to be claimed.

While on 16 December—late as the misty cold gripped the night—Warsak Road reverberated with the sounds of battle and detonating mines, the funerals had already begun. The next morning, the city of flowers had become the city of funerals—a place where old sites of bomb blasts had become part of a kind of grim terrorist tourist tour.

“In a room to the side, the small coffins were stacked one on top of the other, waiting to be claimed.”

Mourning, grief, anger, multiplied by a hundred. We could feel the crushing weight of it all over the city, in the home we visited where a funeral was taking place. “We don’t want to talk to any one,” a mother told me, so furious, so overwhelmed. Why should she? What is there to say? Empty words, still empty a year on.

We thought we were lucky to be amongst the first group of journalists to gain access to the Army Public School auditorium. It was a small group at first, personally escorted and showed around by Lt Gen. Asim Bajwa. Just an hour before, we had heard the last of the mines being set off. Before we went in, while we were outside the school doing TV lives, young boys associated with APS had already shown me pictures on their mobile phones of the auditorium and the bodies of the terrorists. But grainy, mobile footage is almost unreal, almost incomprehensible.

On the steps of the auditorium I saw a drops of blood splattered here and there. As I took pictures, one of the army escorts told me, “Wait till you get inside.”

Butchery. The auditorium smelt like an abattoir. “This is where the most children were killed,” we were told. It hadn’t been cleaned up yet, to show us the full scale of the terrors that had taken place here. We photographed, we filmed, we interviewed. But like the doctors at Lady Reading, we were like zombies. How could a person maintain objectivity and composure in the face of the enormous amount of blood—still sticky—covering half-torn books, shoes left behind, socks, shattered glass, pens rolling on the floor beneath our feet. The apparatus of an ordinary school day juxtaposed with those red tokens of viciousness.

I spoke to a major with the bomb disposal unit, and we both cried, standing just underneath the stage and podium, near where a teacher had been burnt alive, the walls stained like a black wraith. “We couldn’t protect them,” he said, over and over again.

“How could a person maintain objectivity and composure in the face of the enormous amount of blood. . . covering half-torn books, shoes left behind, socks, shattered glass, pens rolling on the floor beneath our feet. The apparatus of an ordinary school day juxtaposed with those red tokens of viciousness.”

I write all this because I have not been able to write about it before, unable to confront it. Reporting is different: we’re supposed to maintain some semblance of separation of fact from feeling. I went home to my children after the work was done, painfully aware that mine were safe, theirs were not. My children had made it home, untouched by fear and blood and loss.

That answers another question I often ask myself: why this terrorist attack pierced so deep that, a year later, the wounds are still fresh, like the blood in the auditorium. Because the idea of dressing your child in a school uniform and sending them to their death is such a universal fear it cuts through. It should not have come to this. The realisation that Pakistan needs to take the fight against militancy seriously should not have come at so bloody a price.

In April, I was at another school in Khyberpakhtunkhwa, filming a more positive story on using technology to aid learning. In the staffroom over tea and biscuits, talk turned to 16 December and I started to cry copiously. I cried profusely again when I read the Dawn special report on the 144 who lost their lives in the attack. I cried again at a garden in Dubai where red flowers were fashioned into a flowing waterfall and all I could smell was the flesh and blood of the APS auditorium.

For many of us perhaps, the trauma has lain coiled underneath the surface of our everyday lives. But a year on, we still don’t have to live with it as the survivors and the families of the victims do. A year on, the commemorative ceremonies and wall-to-wall coverage of the anniversary seem hollow.

It should not have come to this.

Amber Shamsi works with the BBC World Service as a bilingual correspondent based in Islamabad and is a mother of two girls.