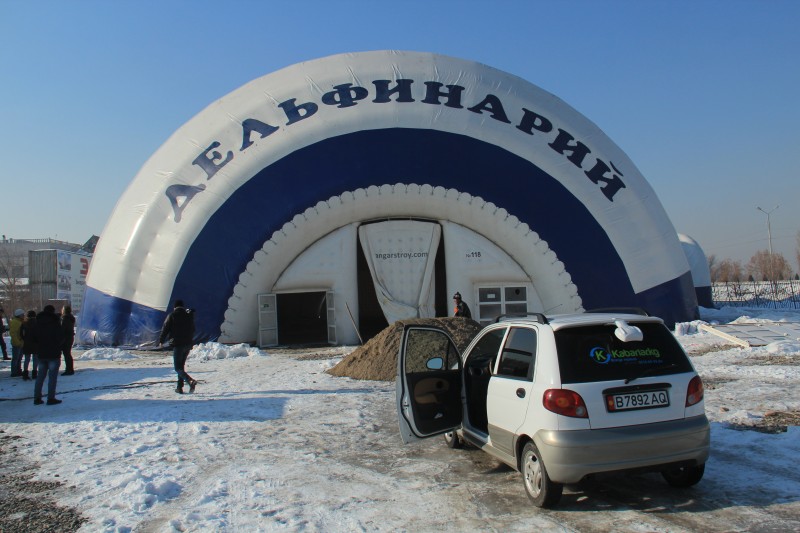 After momentarily humbling the country’s parliament, the slacktivist community in Kyrgyzstan has now set its sights on dolphin wranglers.

Online indignation began brewing and spilling onto all major news outlets after a mobile dolphinarium cropped up in the snowy outskirts of the capital, Bishkek.

Animal lovers say the whole business is a cruel travesty — organizers are dismissive, insisting that the marine animals will actually enjoy their sojourn in the chilly landlocked nation.

Backers of the dolphinarium in the Mayor’s office have said it will run from later this month into May and that visitors will be able to swim with the creatures.

Traveling dolphinariums are banned in many places in the world, with Belarus, Kazakhstan, Indonesia and Russia proving active exceptions, according to one advocacy group. Other countries like Kyrgyzstan lack legislation either regulating or outlawing them.

Given the ex-Soviet region’s sad zoos and old-fashioned approach to circus animals, opponents of the new facility in Bishkek say they have no reason to believe the quartet of dolphins and one whale will be well looked after.

“All dolphinariums are exploitation, non-dependent on size and comfort. Dolphins should live in the ocean!” boomed one Facebook commentator.

But in an interview with Kloop news website, Taras Zhimarev, an organizer of the Dolphinarium, slammed critics for having “nothing to occupy themselves with.” The animals would be well cared for, he promised, and would at any rate “die in two days if released into the wild.”

At the mention of animal rights activists, Zhimarev scoffed derisively.

“Dolphins love doing these tricks,” he said. “If you see how they jump when they are in the sea, they’re just doing the same thing here.”

Zhimarev is not the only one to be irritated by the sudden emergence of an animal welfare lobby in the country, just when the exotic mammals are on their way to town.

“My god, these eternal Greenpeacers, eternal defenders of animals, just give us a chance to look at the dolphins. After all, they are always on the telly. If you don’t like it, then please, sit at home and protest some more,” one anonymous commenter under a Knews poll on the topic complained.

The anti-dolphinarium campaign has played rough, spreading pictures of dolphin-suffering from Russia without noting their origin in Facebook and Twitter posts. But the Mayor’s office is unlikely to back down.

After all, a petition against a similar attraction in Kazakhstan was unsuccessful, despite thousands of signatories demanding President Nursultan Nazarbayev recall the fate of a Beluga whale called Dale, who died from heat problems on a Moscow-centered dolphinarium’s tour of the Central Asian country in 2010.

So a repeat of the online shaming campaign that culminated in the national parliament withdrawing a tender to replace over 100 seats in the legislature in October may not be in the offing.

The parliament-focussed #120seats campaign in Kyrgyzstan was celebrated as a triumph of rage over the state machine, raising faith in the power of spontaneous civic initiatives to spur genuine political change in the republic.

But that campaign was effective precisely because the only beneficiaries of fancy new seats in the parliament were the country’s widely-derided, people-fearing lawmakers.