Is the World Forum for Democracy a Space of Genuine Dialogue? 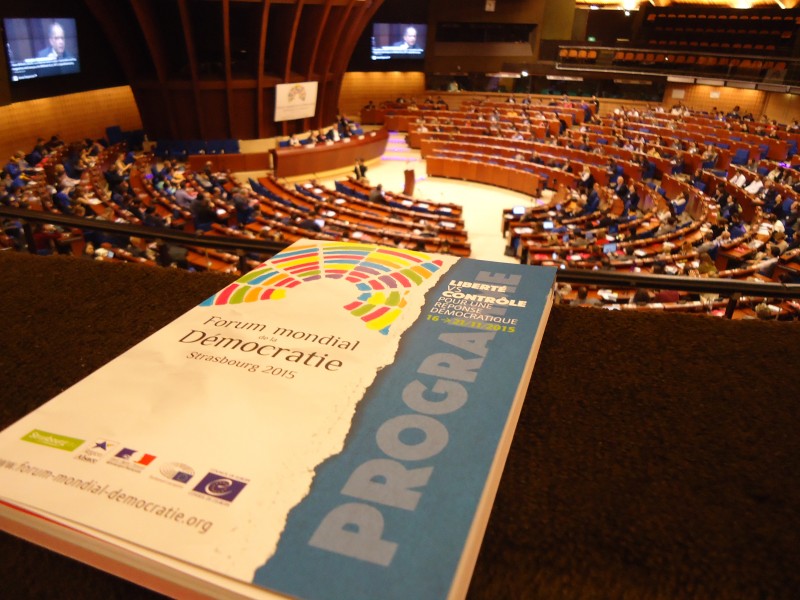 From 18 to 20 November, the World Forum for Democracy was held at the Council for Europe in Strasbourg, the ultimate institute of consensus. After the pressing issue of the Beirut and Paris attacks, the main talking point of the forum was “Freedom vs Control: towards a democratic answer”. We attended the Forum along with Suzanne Lehn and Elise Lecamp from Global Voices. Here is a brief overview of the Forum through the prism of “universality vs intercultural dialogue”.

After spending three days participating in round table debates and listening to testimonies in the European capital, it struck me that it is not only our similarities that are important, but also our differences—and the opportunity to talk about them. The overriding mood at the Forum was one of condamnation of the attacks, and this was also a reminder  that Paris is far from being the only target.

Faiza Patel is the first to speak up #CoE_WFD : “the terrorists are expecting a warlike language from us”

To counter the barbarity that is terrorism, we must demonstrate firmness, solidarity and the strength of our democratic values. #CoE_WFD

During the three days of debates at the Forum, 2,000 participants of dozens of different nationalities came together with the aim of finding similarities in their “values.” While some among them celebrated “European values”, adding no further details, the majority united in under the common banner of “universality of human rights”, which was in fact the mantra of these meetings.

“I want our children to live in a world of European values.”

The event's theme, “Freedom vs Control”, looked at things in a Manichean manner, as though these two notions are irreconcilable opposites. It was, therefore, a matter of choosing which one you supported, and it was because of this that the honorary judge Philippe Bilger was booed by a whole section of the assembly. Judge Bilger dared to express the rather unpopular view that he “wouldn't be against giving up some of his personal freedoms to allow for more collective security.” Whether or I not share the same opinion as Judge Bilger is beside the point. However, the fact that his speech was booed on the grounds that he went marginally against the current of opinion worries me, as this highlights an unwillingness to accept that people have different opinions and therefore stifles the opportunity for debate.

It's for those reasons I would leave a little disappointed—or perhaps you could even say completely concerned—about the World Forum for Democracy. Democracy is the art of agreement, but it is also the art of debate. Thorbjørn Jagland, the Secretary General of the Council of Europe, highlighted the weakness in the art of democracy from the beginning of the Forum, by stating that we are its main guardians, but also the ones in charge of maintaining this balance.

Fortunately, just as with Global Voices Summits, what matters most at this kind of event are the encounters and exchanges of opinion, the occasional amicable clash, that take place outside the official programme. Exchanges that reveal differences, those that show that we are complex and diverse beings, are the ones that can help us change our attitudes one small step at a time. It is by creating the space for open discussion and debate that we can look beyond our own beliefs and discover intercultural empathy, which in turn helps us see things more clearly. It is then and only then that the World Forum for Democracy can make complete sense, and that the words of Michaëlle Jean can be truly heard:

#CoE_WFD The World Forum for Democracy is one of these places where the future can be thought about and can be shaped.