A Crash Course in Trinidad and Tobago's 2015 General Elections 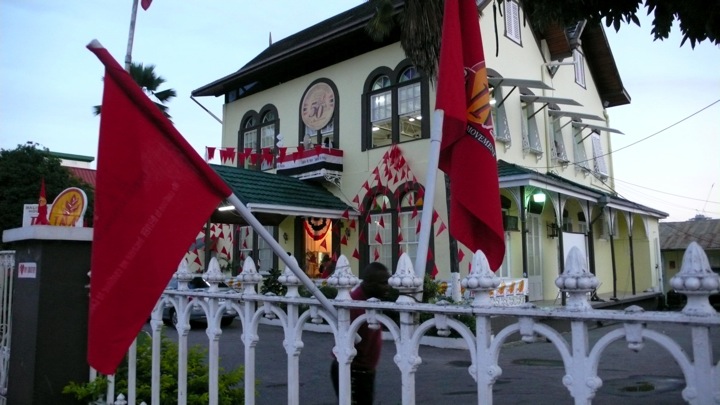 Trinidad and Tobago's general elections, which took place earlier this year on September 7, ushered in a new government, replacing leaders who had been besieged by accusations of financial impropriety and misbehaviour in public office. A few months before that, Guyana held elections, which might have served as a cautionary tale, but Trinidad and Tobago is famous for being “harden” (local parlance meaning “stubborn” or “slow to learn”), which perhaps is why the twin-island republic's elections have a unique recipe:

Carnival is the perfect occasion for this, as there are literally thousands of attractive, scantily clad women gyrating in the streets to pulsating music. Even a monk would be distracted when one of these women happens to “wine up” (that hip-swiveling dance for which the country is famous) with the leader of the country's opposition and photographers take lots of pictures, which then feeds the social media firestorm about what Keith Rowley's dance moves say about his ability to lead a country. (The deeper side of this discussion, of course, was about race relations and patriarchy.)

Wait a few months, then add sexual harassment allegations to the mix. (These allegations against Dr. Rowley by newspaper reporter Anika Gumbs backfired, after concerns about a possible conflict of interest emerged, given that Gumbs was simultaneously a permanent staff member at the newspaper Express and the recipient of two government contracts.)

Even better, do it within the walls of parliament during an attempt to bring a “No Confidence” vote against the leader of the opposition, where parliamentary privilege protects you from having to be held responsible for your statements or the damage they may inflict. Allege that Rowley is unfit for public office because he is a “product of rape” and in so doing, also insult rape victims throughout the country. To muddy the political waters further, pay online trolls to make race-based political mischief and then deny doing it, despite testimony to the contrary.

In fact, use them to draw attention to your political opponent. (The People's National Movement used the hashtag #GetOutKamla, while the People's Partnership government favoured #NoRowley.)

Upset at not being chosen to contest a seat in the upcoming elections? Express your frustration through song — specifically, one in which you call your prime minister a “neemakharam” (a term that has come to be synonymous with a political ingrate).

Contrary to the spirit of the law, which prohibits any kind of canvassing on election day, attempt to use the Internet to your advantage by soliciting votes virtually.

In Trinidad and Tobago, polling stations traditionally open from 6 a.m. to 6 p.m. — but on September 7, 2015, inclement weather caused heaving flooding in certain parts of the country, prompting the Elections and Boundaries Commission to extend the voting hours in certain areas, not foreseeing the hullabaloo that would ensue.

After the results are in and the country's new prime minister, attorney general, and minister of national security are sworn in — and sworn in again thanks to an error in protocol — file a petition to declare the general elections null and void, due to the extension of the voting period.

Sounds complicated? It's a walk in the park compared with the backbiting and legal wrangling involved in internal party elections in Trinidad and Tobago!