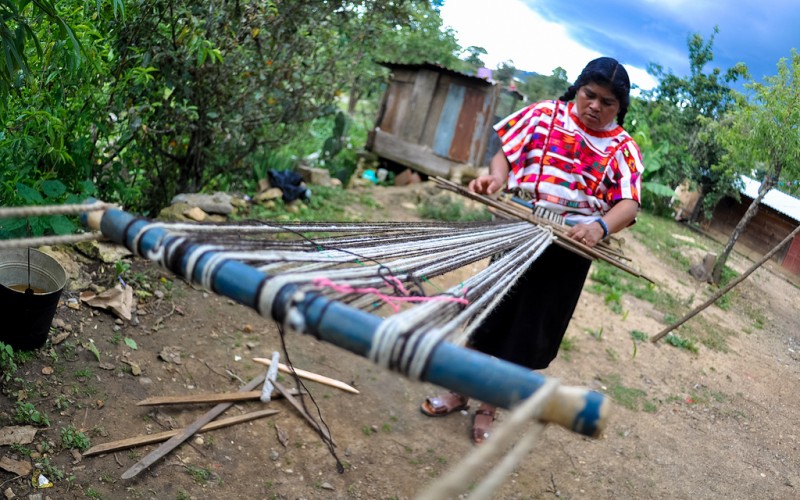 Mexican social media exploded in November at the news of the apparent appropriation of a traditional textile design from Oaxaca, México, by a French designer and fashion company. The uproar appeared to stem from an article published on November 16 by a local news site, reporting that:

Municipal authorities from Santa María Tlahuitoltepec said that in addition to the alleged plagiarism of one of their designs by French designer Isabel Marant a few months ago, a French company called Antiquité Vatic filed a lawsuit to claim copyright of the textile's design, which is originally from the Mixe de Oaxaca community.

Other online news sites picked up the news, emphatically asserting that residents of the indigenous Mixe community in Oaxaca could no longer be allowed to produce their traditional textile embroidery unless they paid the corresponding royalties. Even the Mexican municipal authorities of Tlahuitoltepec would be subject to paying a required royalty to the French government, according to the coverage:

Tlahuitoltepec's local government revealed that they found out about the matter from an order that arrived at the town hall from the French government. It prohibited the production and sale of the clothing until the community paid the royalties due to the French company.

But as it turns out, the story as told isn't entirely true. The Tlahuitoltepec government hasn't received any formal notification of lawsuit, according to a November 20 press release from municipal authorities, who sought to correct the record.

And the dispute between designer Isabel Marant and the indigenous community isn't new, either. The blouse in question is from her spring-summer 2015 collection, and in June of this year, the residents of Santa María Tlahuitoltepec, home to the Mixe community, held a press conference to denounce what they saw as an act of plagiarism. The story received coverage at the time in the UK newspaper the Guardian, among other mainstream media outlets.

A wave of outrage

That didn't stop the inaccurate version from going viral. The information echoed widely online, with some stories drawing more than 300,000 shares. Many Twitter users began using the hashtag #MiblusadeTlahui (#MyShirtFromTlahuitoltepec):

Oaxaqueña herency, not french. Don't get it confused

Image reads: “I'm Isabel Marant, pseudo-designer of French fashion. I steal and patent Oaxaqueña embroidery, which has existed for more than 300 years.”

On Change.org, two petitions quickly gained momentum: the first, titled “Oaxaqueños Mixes’ designs stay in Oaxaca!” was created on November 19 and now has more than 145,000 signatures. It's addressed to Mexico's state authorities, stating:

They should publicly declare that embroidery made by the Mixe communities of Oaxaca are protected by law and are not subject to appropriation or patents by Mexican or foreign individuals.

The second petition, titled “Tlahuitoltepec is a vibrant community…Oaxaqueños’ embroderies are Mexican,” addresses the National Commission for the Development of Indigenous Peoples.

The volume and intensity of reactions were such that Marant wrote on Facebook stating that she “denies owning any patent to the Santa Maria Tlahuitoltepec embroidered blouses” as well as having asked the French authorities to collect royalty payments.

She said that she had, in fact, “officially informed the court that she does not claim to be the author of this tunic and these designs,” referring to the copyright claim lodged by the French fashion label Antik Batik de Gabriella Cortese (misspelled in many of the Spanish-language reports in November as “Antiquité Vatic”). For her part, Marant said she told had “presented submissions which expressly point out that these designs come from the village of Santa Maria Tlahuitoltepec.”

Perhaps this clash with France's fashion world will bring Mexicans and others around the world to recognize and defend the rights, identities and creativity of indigenous groups. Hopefully this latest controversy too serves as an important lesson: just because content goes viral doesn't make it true.