Chhaupadi, the Dwindling Nepalese Tradition That Turns Women Into Outcasts During Their Periods 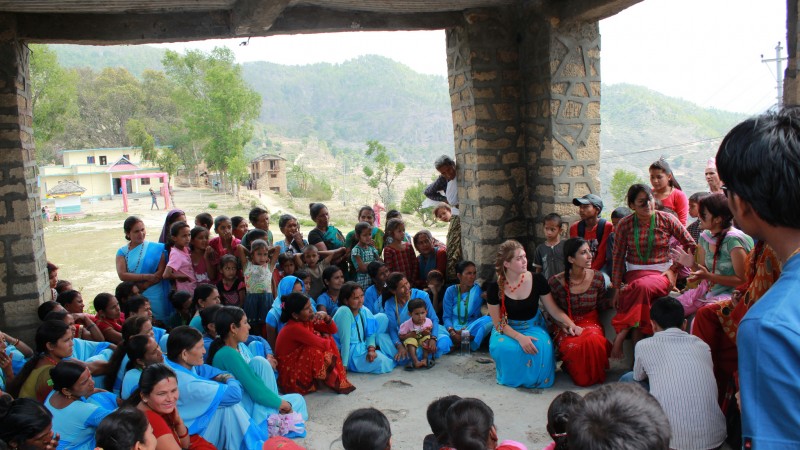 Nyaya Health: Mass community health teaching. Street theater on menstrual hygiene and the practice of Chhaupadi. Image from Flickr by Possible. CC By 2.0

While Nepal has made “fair” progress in promoting gender equality and empowering women, according to the United Nations Development Programme, news of ‘chhaupadi’ appearing in the mainstream media stand in stark contrast to the country's achievements.

There won’t be chhaupadi in Dhimkot now.

So, what is ‘chhaupadi’ really?

In far and mid-western regions of Nepal, following centuries-old tradition, menstruating girls and women are shunned, forced to stay outside in cow sheds or small huts so as to spare their family members from being ‘polluted’.

Razen Manandhar, a former journalist with The Himalayan Times daily, writes about chhaupadi in his blog:

[…] They strongly believe that women become impure during those 4/5 days every month and their gods – “Mate”, as they call him – don't like to see women coming to them at this period of time. So, the men force women in their periods to confine themselves in small, narrow huts/sheds without any window or door. […]

[…] Men believe that if women in periods remain in their houses, tigers would come attack them or their cattle. Or the god will be angry at them and they will fall sick. They care more of the invisible god than their own family members. […]

This is a typical “goth,” or shed, in Western #Nepal where girls sleep during menstruation. Open and exposed. #MHM pic.twitter.com/GFETYKrckk

Six girls were planning to share the shed behind on the night we met them. “I am fearful of snakes and weather.” #MHM pic.twitter.com/TU3bsgHh9r

Kamala, 14. Behind her, her shed where she's been sleeping while menstruating, since she was 11. Rain or shine. #MHM pic.twitter.com/Gyp0M5tKrC

“I tell them it's an outdated practice, but they get angry.” Anjana, 16, on sleeping outside during her period. #MHM pic.twitter.com/Mxj7wr78Oy

Three generations of women. “It will anger the gods.” Why women are forbidden to enter the home during menstruation. pic.twitter.com/WTdwKQRhwP

The tradition also means the girls are not allowed to touch books or go to school and are barred from carrying warm clothes and blankets to the sheds. There is always the fear of wild animals and snakes, not to mention wanton male perpetrators.

They are not even allowed to take nutritious food and milk, fearing that the animal will either fall sick or stop milking.

Although the Nepalese Supreme Court banned chhaupadi in 2005, it is still rooted firmly in many remote hill villages.

Even women leaders and activists are compelled to follow the tradition. The Himalayan Times quoted Binita BK, the Bajura district treasurer of United Communist Party of Nepal-Maoist:

It is obvious that it is a widespread social evil. It is an outcome of conservative mindset. But what to do, we don’t have any other option but to stay separately, away from our house during our periods, when we are in the village.

Though many chhau (sheds) were destroyed following awareness campaigns led by non-governmental organisations in coordination with government agencies, in some places they have been rebuilt to keep the tradition alive.

However, young girls and women are pushing back against the tradition that turns them into outcasts for a few days a month. Thanks to the awareness raised by the NGOs and concerned government bodies, the sheds are being destroyed and more and more villages are becoming chaupadi-free.