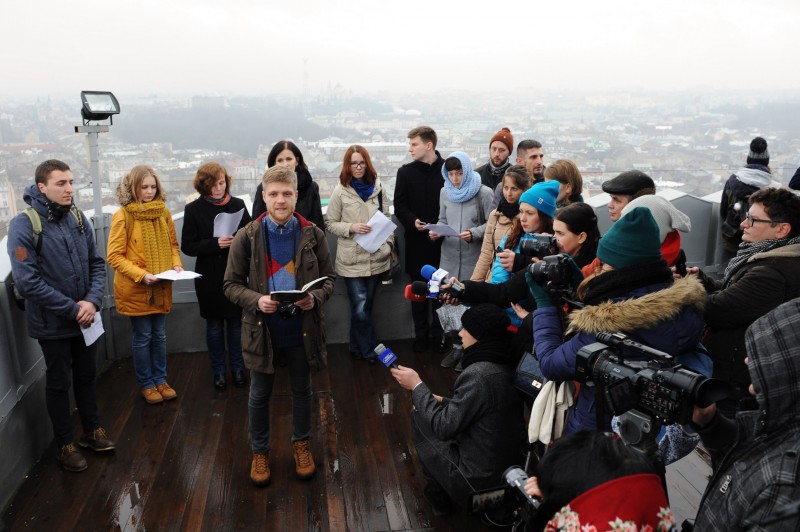 Volodymyr Beglov, a Ukrainian journalist and civic activist, reading the Declaration of Human Rights in Lviv. Image by Yurko Dyachyshyn.

Beaten by the wind and the rain, the activists took turns reading the entire text of the Declaration in Ukrainian, Norwegian, English, French, Polish, and Crimean Tatar languages to demonstrate the universality and independence of human rights and to emphasize that governments bear responsibility for abiding by and enforcing basic human rights principles. 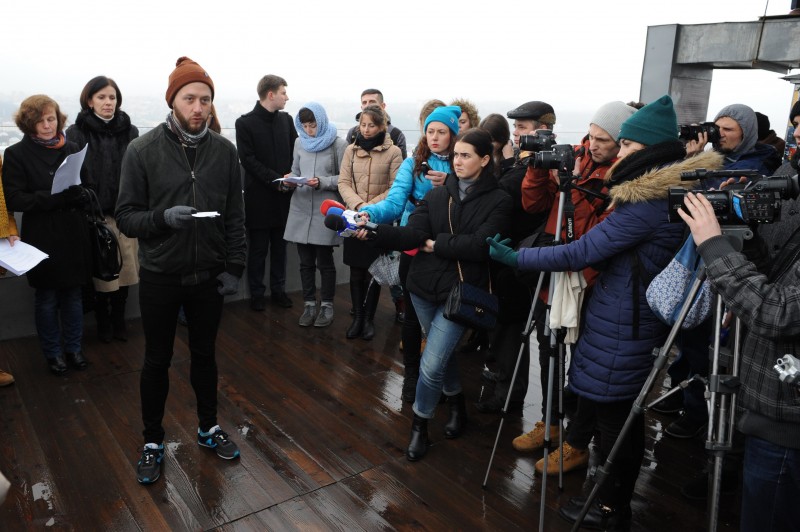 An hour before the reading took place, volunteers from the Ukrainian National Scouts organization handed out leaflets to citizens and tourists in Lviv, inviting everyone to join the event at the top of the City Hall despite the rain. 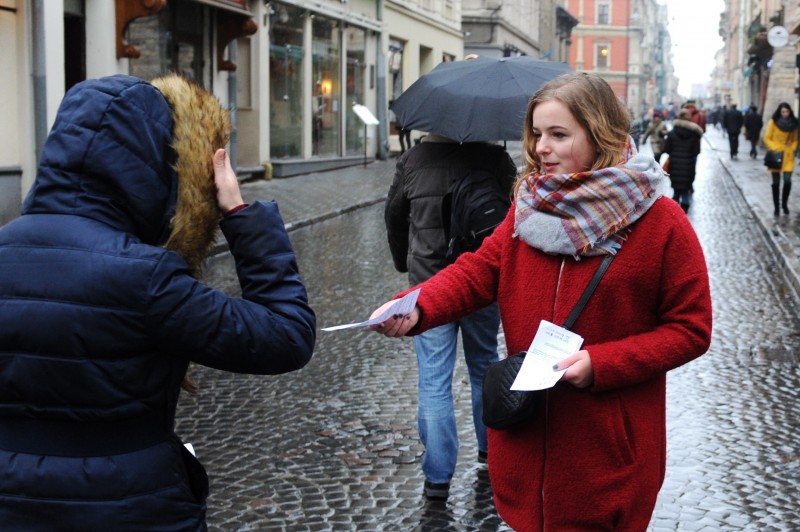 A Ukrainian scout-girl invites passers-by to join the reading. Image by Yurko Dyachyshyn.

As part of the effort to raise awareness of Human Rights Day, organizers also created a poster with the text of the Declaration [1]. The poster was placed in the Lviv City administrative center, where dozens of people come every day for various municipal permissions or registration needs. In such a high-traffic area, Lviv citizens could study the landmark legal document while waiting in a queue.

Ukrainian activists said they wanted to raise public awareness of a basic instrument like the Universal Declaration of Human Rights because such rights are considered to be quite an abstract category in Ukraine. In reality, human rights are a fundamental topic at every level of society.

Journalist Volodymyr Beglov, who joined the reading, said politicians in Ukraine were mostly concerned with their private interests rather than legal norms, and that civil society should strive for the situation to be turned around. Olesya Yaremchuk, another journalist, said that even symbolic declarations of human rights norms were important in order to keep the ideas of Euromaidan protest, especially that of human dignity, going.

Alim Aliyev, a civic activist from Crimea, stressed that for the Crimean Tatar community, the issue was exemplified by a daily struggle for justice. “For us human rights are not an abstract notion, but a harsh reality. In Crimea today, rights are violated en masse, there are dozens of political prisoners,” he said.

Organizers wanted to pay special attention to the plight of political prisoners and to demonsrate solidarity with them. Nadia Savchenko is the most controversial Ukrainian prisoner of war, who is currently on trial in Russia for the alleged murder of two Russian journalists. Human rights groups and Western governments have called for her release, denouncing what they describe as fabricated charges.

A Russian court has also sentenced the Ukrainian film director Oleg Sentsov to 20 years in prison after a trial described by Amnesty International as “redolent of Stalinist-era show trials.” Sentsov and his co-defendant Alexander Kolchenko, who received a 10-year sentence at the trial, were accused of planning terrorist acts in Crimea after the peninsula was annexed by Russia last year.

Other prisoners of conscience mentioned at the event included lawyer Intiham Aliyev, a widely respected human rights defender in Azerbaijan. Along with other human rights activists, he was jailed in mid-2014 as part of a country-wide crackdown. Aliyev's arrest is widely considered to be politically motivated. Aliyev had previously brought a number of cases against Azerbaijani authorities to the European Court of Human Rights.

Watch a brief video of the reading of the Declaration in Lviv on International Human Rights Day.

The event was organized by Ukrainian media non-profit Institute of Mass Information [2] with support from Freedom House.