This City in Siberia Would Rather Elect a Cat Mayor 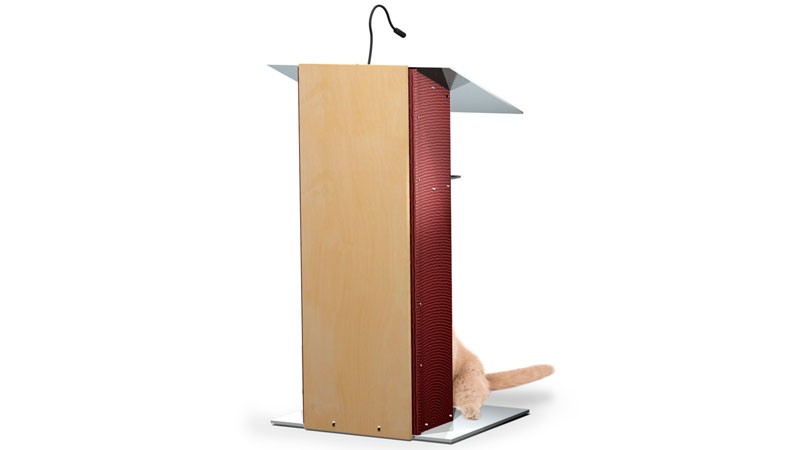 There are around 700,000 people living in Barnaul, a city in West Siberia about 2,200 miles east of Moscow. For the past five years, the people of Barnaul haven’t had a mayor they elected themselves. As the city’s political process slips further from the public, the frustrations of ordinary citizens are beginning to show. For instance, one Internet community is promoting a house cat’s mayoral candidacy.

For most of the past five years, Barnaul’s “city manager” was a man named Igor Savintsev. He resigned earlier this August, when local investigators charged him with abusing his authority. (Savintsev is accused of selling municipal lands on the cheap to businesses affiliated with his own family, losing the government an estimated $155,000.) Savintsev was Barnaul’s first post-Soviet mayor to be appointed, rather than elected by the people.

Savintsev’s son, Maxim, is also quite the model citizen. He was put on an international wanted list last year, when he fled the country, after being charged with fraud and embezzlement. Evading police for six months, Maxim was finally apprehended in Thailand. Today, he spends his days in Russian prison, awaiting trial.

Vying for Igor Savintsev’s office (which is temporarily occupied by an acting city manager) are a handful of local officials and entrepreneurs. On December 22, a special commission—controlled by the city council and Altai Governor Alexander Karlin—will pick Barnaul’s next mayor, who will remain in office until 2017.

Enter the Altai Online community on Vkontakte (Russia’s most popular social network). On December 6, about three weeks after Barnaul officials formally registered all candidates for the mayor’s race, Altai Online announced a race of its own, inviting community members to choose between seven different contestants: the six men who are actually registered as candidates, plus the administrator's cat, Barsik. One week later, Barsik has almost 4,500 votes (91.2 percent of all votes cast).

“Who would you like to see as Barnaul's new city manager?” Screencap: Vkontakte

Altai Online’s virtual election has made headlines in the Russian media, where Barsik’s candidacy is being described as a substitute for voting “against all.” The online news site Gazeta.ru ran a 1,000-word story about Barsik that included elated comments from regional officials in Russia’s “systemic” opposition parties (the groups that regularly win seats in the federal parliament, and, at least superficially, play a role in national lawmaking). For instance, a figure in A Just Russia told Gazeta.ru, “The problem isn’t even with the candidates. This is a protest against our system of staffing official offices. The current city council never even apologized to the citizenry for the last city manager.” Meanwhile, a representative of the Communist Party, which isn’t fielding a candidate in Barnaul, said, “Votes for a cat show that people in this city are looking to show their claws.” 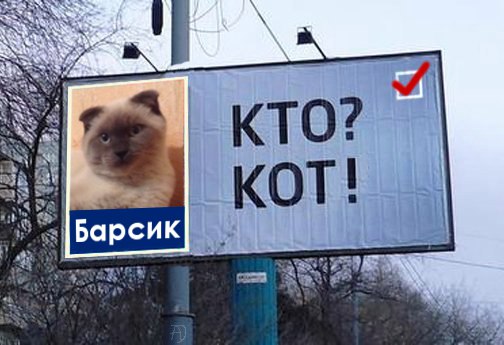 (Photoshopped image.) “Who? A cat!” (In Russian, these words are spelled very similarly.) Screencap: Vkontakte.

Even Altai’s governor, Alexander Karlin, extended a rather absurd welcome to Barnaul’s feline favorite, telling journalists, “Through the cute image of Barsik, our people are conveying their special wishes to the future head of the city. Out here, we associate this good animal with well-being and comfort.”

The administrator of Altai Online goes by the pseudonym “Altaiskii Seyatel” (Altai Farmer). RuNet Echo asked him what he thinks about all the attention his cat is getting from Russia’s establishment, and what he makes of opposition parties celebrating Barsik’s attack on the status quo. “Barsik the Cat owes his success to the fact that people in this city don’t know who these other candidates are,” Altai Farmer said. “People don’t know their platforms, why they are running for office, or what they want to do for the city. So it’s not clear why the opposition is so happy, when they couldn’t even field a candidate whom voters know and understand.”

While it’s certainly embarrassing for the men now competing to be mayor of Barnaul, Barsik’s candidacy doesn’t appear to share roots with the opposition movement most foreigners know from reports about protest movements in Russia. Altai Farmer has avoided directly criticizing politicians, and he told Gazeta.ru that Barsik is far from an oppositionist. Even more telling, he also said Barsik likes the All-Russia People's Front—a political movement launched by Vladimir Putin in 2011, intended to create reservoirs of support for Putin outside United Russia, the country’s ruling political party.

Altai Farmer told RuNet Echo that he hopes Barsik can help establish the city’s brand, becoming something like a “people’s mayor” or even a tourist attraction. “Barsik is already part of the region’s political establishment,” his owner declares, “and he’s not giving up on his political ambitions.”