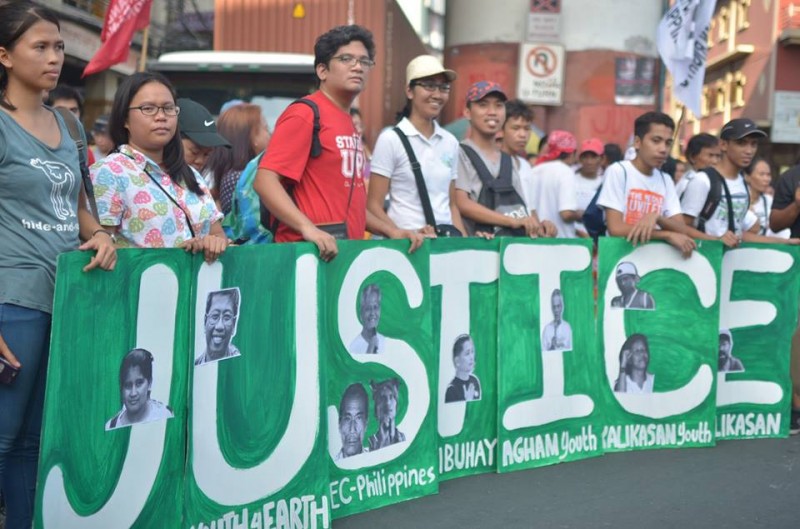 Filipino environmental activists call for justice and the protection of human rights. Photo from the Facebook page of Loi Manalansan.

Singapore still has much to do to build political institutions, judicial systems, and economies that allow ordinary people to live with dignity. The growth of hate speech against religious and racial minorities, the justification of rights violations in the name of combating terrorism, the clawing back of economic and social rights in the name of economic crises or security, and the failure to respect the right to privacy in the digital age, show the relevance of the 2 Covenants and the need to respect them.

In Malaysia, the Suaram human rights group denounced the government for refusing aid to Rohingya boat refugees from Myanmar. The Rohingya, who are mostly Muslims, are not recognized in Myanmar as citizens, forcing many of them to seek refuge in neighboring countries. In a press statement, SUARAM Adviser on Human Rights Day Kua Kia Soong wrote:

The tragedy of Rohingya refugees being stranded in the Andaman Sea in 2015 was bad enough but the refusal of Malaysia and other regional authorities to take them in was a human rights abomination of major proportions. The numbers stranded aboard rickety ships was estimated to be in the thousands. The Malaysian government did not engage in any search and rescue efforts to provide desperately needed aid at sea nor did they allow migrants to land on offshore islands for such aid.

In the Philippines, activists held rallies across the country to highlight the detention of dissidents and the militarization of anti-mining communities. Below are some photos of the protests in Manila, the country’s capital: 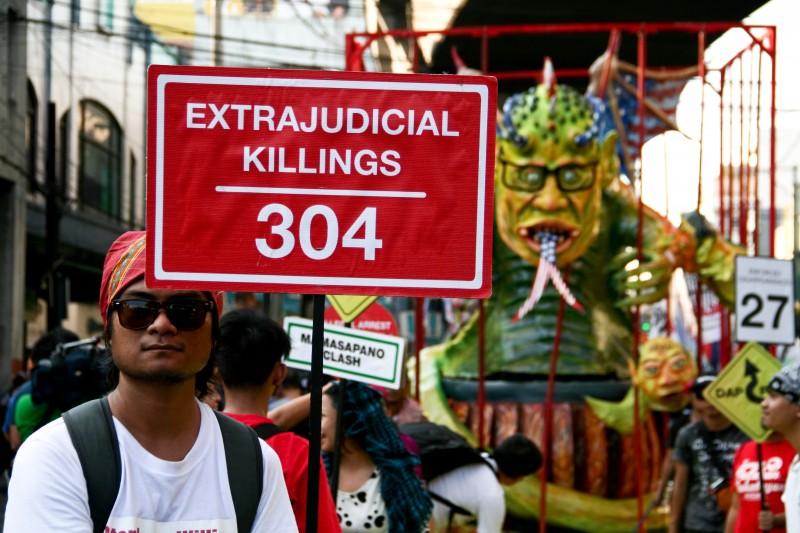 A protester holds a poster against the alleged extrajudicial killings that occurred during the term of Philippine President Aquino. Photo by J Gerard Seguia, copyright Demotix (12/10/2015) 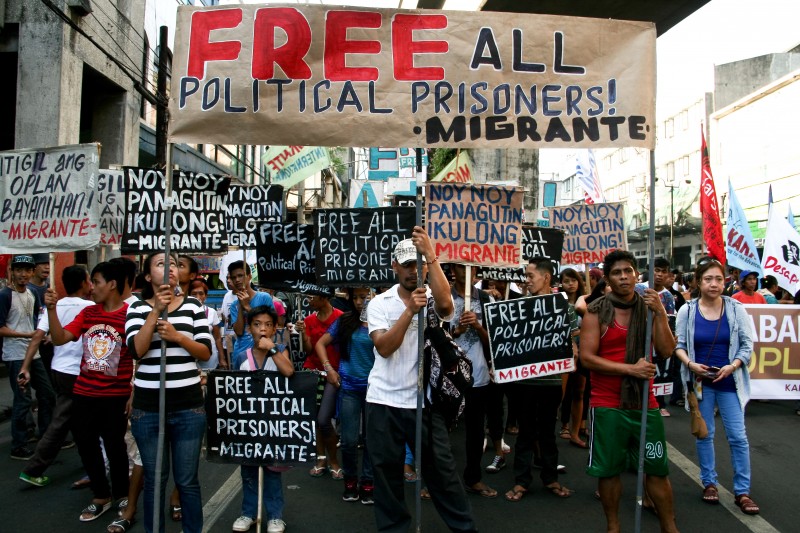 Protesters call for the release of the political prisoners allegedly detained by the Aquino administration. Photo by J Gerard Seguia, copyright Demotix (12/10/2015)

In Cambodia, about 10,000 people in 15 different provinces stages demonstrations calling for justice, wage increases, and land rights. The government banned protests in the capital city of Phnom Penh, but it didn’t stop the activists from submitting their petitions to various government agencies. Below are some of the images of the protests across Cambodia: 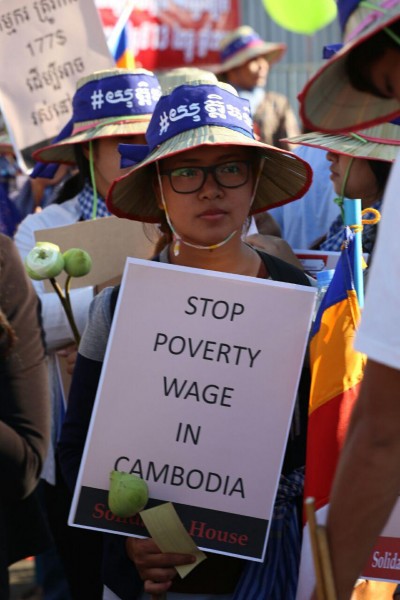 One of the demands of activist groups in Cambodia is to raise the country's monthly minimum wage. Photo from Licadho, a human rights group.

And finally, in Muslim-dominated south Thailand, students from Patani organized various activities to draw attention to the local people's push for self-determination rights. The students also called for peace in the conflict-torn region, where a separatist movement still exists: 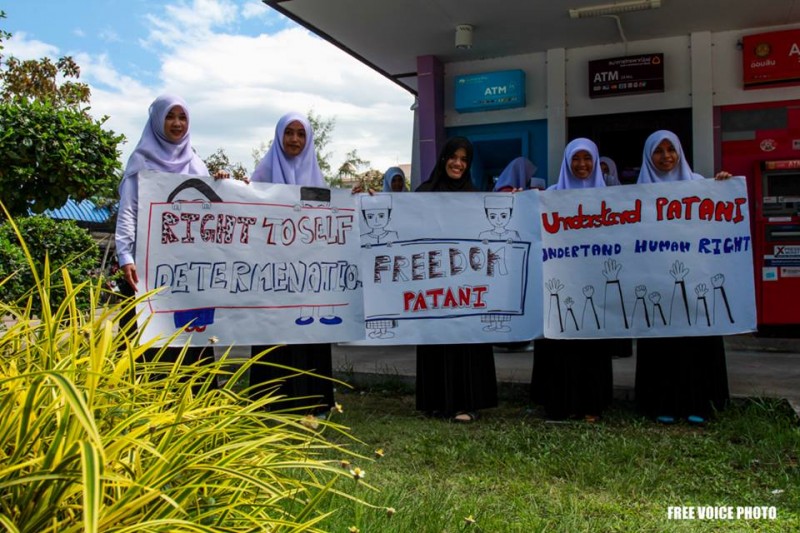 Students in Patani assert the people's right to self-determination. Photo from the Facebook page of Free Voice. 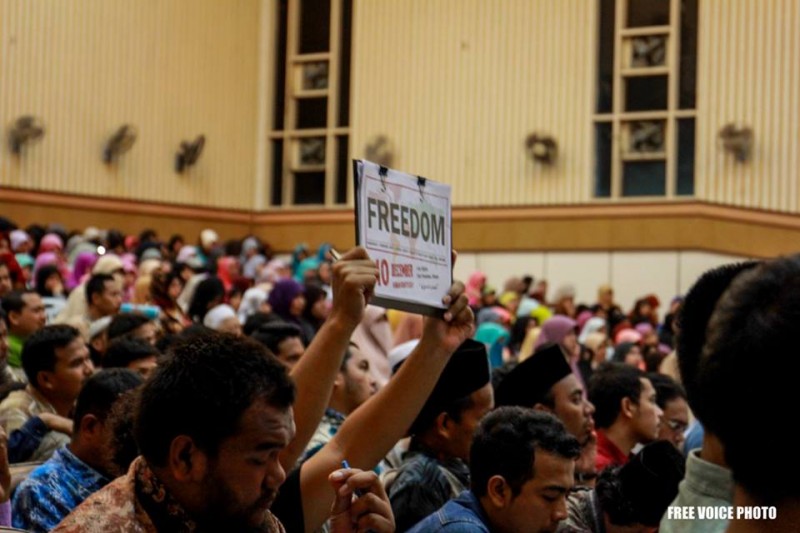 A participant holds a placard in a forum during the human rights day celebration in Patani. Photo from the Facebook page of Free Voice.