Climate Change Could Already Be Displacing More People Than War 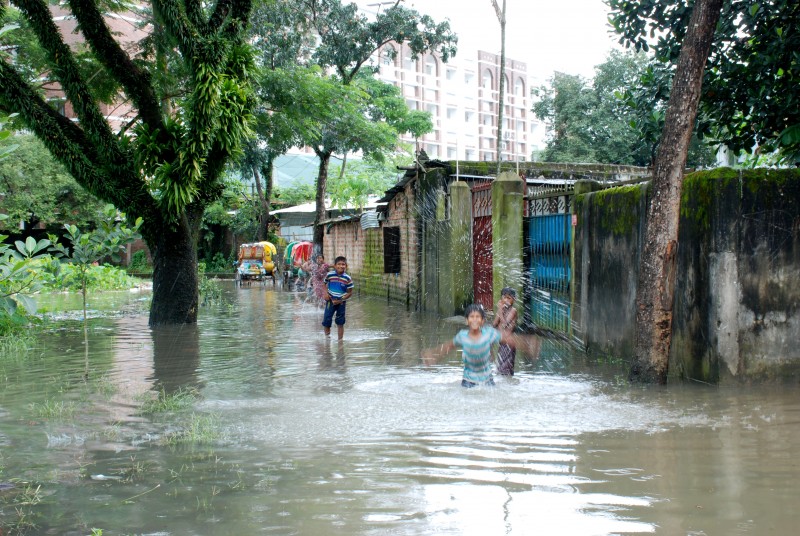 Children play in the dirty flood water in Sylhet city, Bangladesh, on September 2, 2015. Low-lying Bangladesh is perhaps the most vulnerable nation to the impacts of climate change. Photo by Md. Akhlas Uddin. Copyright Demotix

This article by Jason Margolis for The World originally appeared on PRI.org on December 9, 2015, and is republished here as part of a content-sharing agreement.

Some 26 million people are being displaced by natural disasters worldwide — roughly one person per second — three times the number of people displaced by war and violence. And most natural disasters are related to climatic conditions (although scientists can’t tie a specific climatic event, like a hurricane, directly to the changing climate).

Francois Gemenne, who studies populations displaced by environmental conditions and teaches at several European universities, says most climate refugees move internally, very short distances. And typically, the most vulnerable, the poorest, are unable to move because migration is simply too expensive.

“People are stuck in the face of disaster. People, to a certain extent, can sustain some changes and can resist changes. But the changes are now becoming so hard, and so quick, and so repeated, that it comes a point where people can no longer sustain it,” says Gemenne. “We see a narrative of sustained suffering and sustained adaptation until a tipping point is reached and then a decision to migrate is taken.”

Of course, it’s difficult to label somebody as a “climate refugee” when the forces that trigger people to move are often so complex — migrants relocate due to war, famine, economic hardship and natural disasters.

“Clearly this is a difficult issue and it’s not always easy, apart from some obvious cases such as sea-level rise, to identify climate change as a sole trigger (of migration), says Gemenne. “I think, actually, it makes little sense to try to identify and define a specific category of climate refugees or ecological refugees. I think that what we ought to do is to recognize the growing role of the environment as a driving factor of migration.”

Consider Africa, says Gemenne, where a significant portion of the population remains tied to the agricultural economy that's been disrupted by a shifting climate. “Many of the economic migrants in Africa are also environmental migrants because they can no longer make a livelihood.”