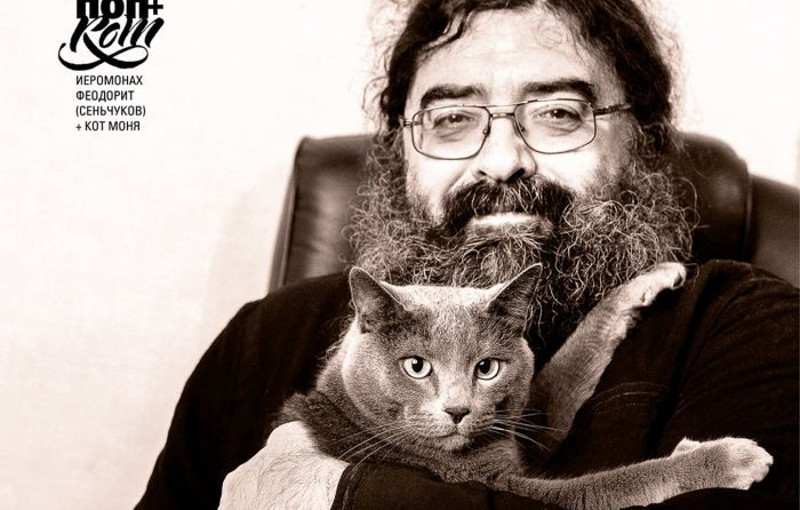 The October page of the quirky calendar features hieromonk Theodorit and his cat Monya. Image from pravmir.ru.

You’ve probably never seen cats and the Russian Orthodox church so up close and cuddly together. A group of Christian enthusiasts has released a photo calendar where the 12 months of the upcoming year are illustrated with images of Orthodox priests posing with their cats. The “Priest + Cat” calendar published by Artos, an association of Christian artists, is aimed at promoting “modern Orthodox culture” in Russia.

While the latest issue of the famous Pirelli Calendar might have signaled a cultural shift (by foregoing its usual provocative nudes), “Priest + Cat” seems to challenge the very idea of traditional Orthodox calendars, usually picturing saints and icons—so it’s no wonder that it has gone viral immediately.

The bearded smiling clerics in long robes were captured in intimate photos with their felines by photographer Anna Galperina in their homes, on cozy sofas with cushions or sunlit benches. 2016 will start off with archpriest Oleg Batov and his cat Apelsin, and Mr. February—archpriest Pyotr Dynnikov who runs an animal shelter—is photographed with his two pets, Angola and Vasik. 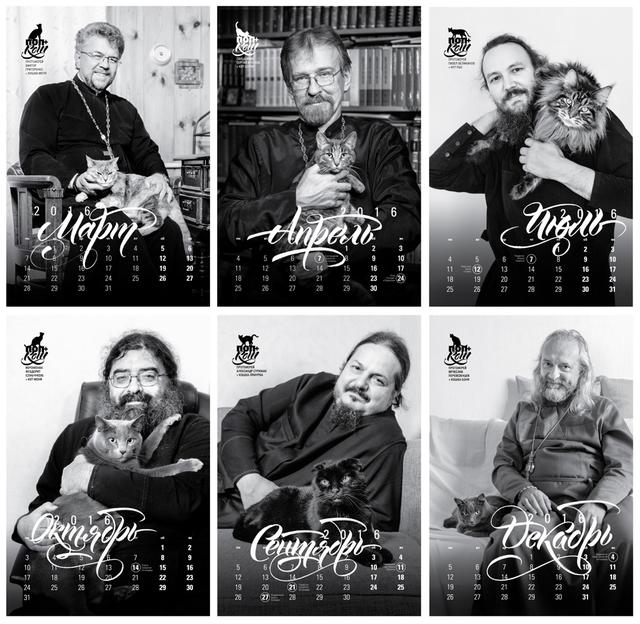 A sampling of the monthly pages in the “Priest + Cat” calendar. Image from Xenia Loutchenko on Facebook.

Loutchenko says the casting process for the calendar was spontaneous, with the priests bringing their own felines along for the ride: “It was whoever had a cat and was ready to pose for a photo.” The journalist insists that the calendar is not officially supported by the Russian Orthodox Church, and was inspired by a photography book about the everyday lives of Russian clergy.

“I don't see a big sin here,” Russian Orthodox Church spokesman, the Very Reverend Archpriest Vsevolod Chaplin said, reacting to the calendar recently. “Priests have cats, cats have priests, sometimes cats even live in a church. I wouldn't put such a calendar up on my wall though.”

Some RuNet users seemed to have doubts about the idea of the calendar, questioning the spiritual element of the enterprise.

Oh, I don't know… I somehow got used to the idea that cats, participation in “The Voice,” etc. is secular, and here we see church rank and all that…

While the reaction to the calendar was mostly positive, there were some people who considered the project to be “kitsch.” “I got some comments from those who are far from the Church, like “Nothing can help these priests, their image can't be improved even with cats!” Loutchenko told the Komsomolskaya Pravda newspaper.

Users commenting on the news on the religious website Pravmir, where Loutchenko works, also had varying reactions to the “Priest + Cat” project. One anonymous user wrote:

The portraits are good, the priests are cheerful, but the idea is strange. The priests are not pop stars to be depicted on a calendar. Neither are they close relatives. It is possible that someone orders a calendar featuring their relatives. But this one is a strange enterprise.

User Elena Gatchinskaya countered the criticism, wondering what was so bad about the idea.

What’s the issue here? This is a normal calendar for an upcoming year. The priests will remind you of Christ, and the cats are anti-stress. And they will also remind you of Christ. “Let every breath praise the Lord.” Why do so many people react so negatively?

Yekaterina Kovrigina said she'd take the priests any day over the symbols of the upcoming year, monkeys—such animal calendars usually sell very well in Russia, and the monkey ones have already taken over the printed press kiosks.

Better priests with kitties than those monkeys of all kinds splashed over every newsstand.

The “Priest + Cat” calendar had an initial print run of 1,000 copies but now looks likely to print more. The calendar is now for sale in several churches in Moscow and can also be acquired online.