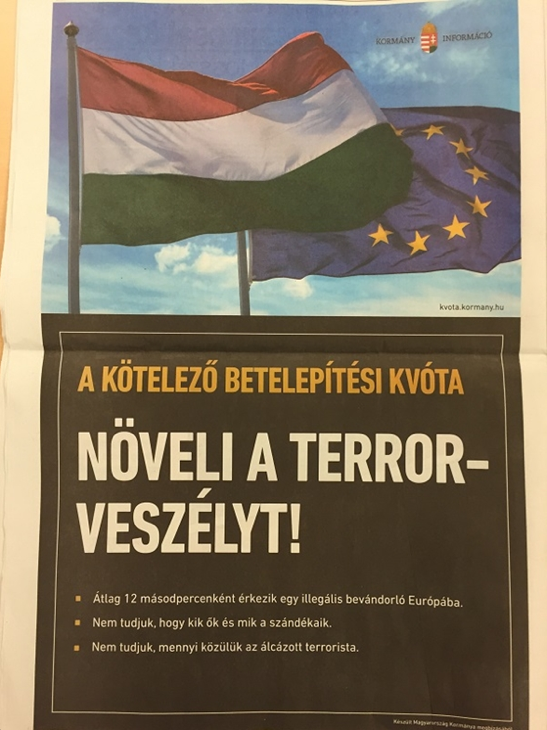 Image by hvg.hu. The text reads: “The compulsory resettlement quota INCREASES THE RISK OF TERRORISM! On average one illegal immigrant arrives to Europe every 12 seconds. We don’t know who they are or what their intentions are. We don’t know how many are undercover terrorists.”

Throughout 2015, unprecedented numbers of refugees have flowed into Europe. Relying on informal channels and sheer luck, those fleeing war and persecution are finding either helping hands and warm welcomes or barbed wire fences and insurmountable bureaucratic obstacles upon arrival.

The European Union has shown itself to be largely unprepared to adequately deal with influx, and proposed solutions have come up against leaders who prefer to do nothing or drum up fear and xenophobia in their own countries to gain political leverage. Hungary has been particularly vocal about its anti-refugee stance, misleading the public with a national consultation that equated migration with terrorism and a nationwide fear-mongering billboard campaign.

But Hungarian authorities aren't done yet. The government of Prime Minister Viktor Orban and his Fidesz party have announced plans for its next billboard campaign, this time specifically against the EU-proposed plan to resettle refugees in so-called frontline countries like Italy and Greece across the continent. The first billboards of the campaign, which will cost around 380 million forint (around 1.2 million euros) of taxpayers’ money, are up, and full-page adverts pushing the government's arguments have already run in large national dailies.

On December 3, 2015, Hungary also launched a legal challenge to the EU’s refugee relocation plan. Last month, it debuted an aggressive petition against the EU's proposed measures as well. Stands have popped up on the streets, run by ill-prepared activists promoting fabricated numbers and racists opinions (video in Hungarian). According to official sources, around 900,000 to 1 million signatures have been collected so far.

The petition can also be signed online via an official government website rife with factual inaccuracies. Here is a selection of the statements with clarifications and corrections. 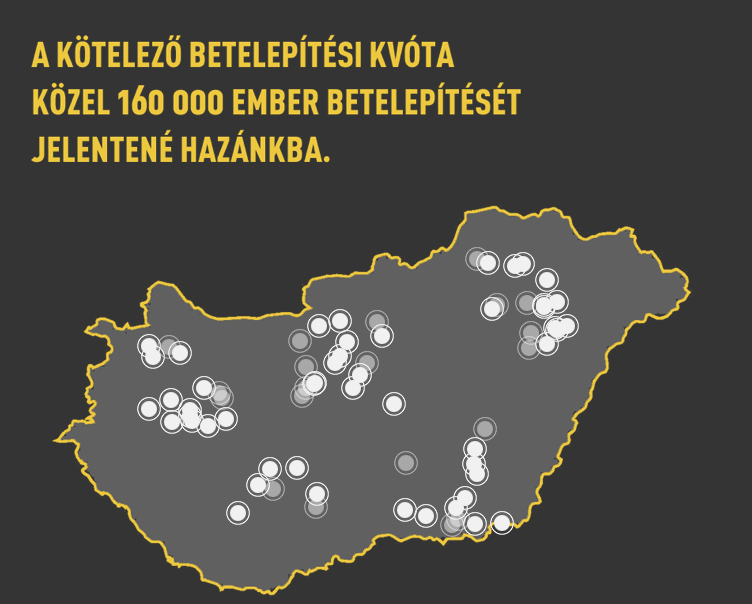 In fact, under the EU's resettlement scheme, Hungary is assigned 1,294 refugees, not 160,000 as the government claims. Even with family reunifications, this number is not expected to exceed a few thousand. 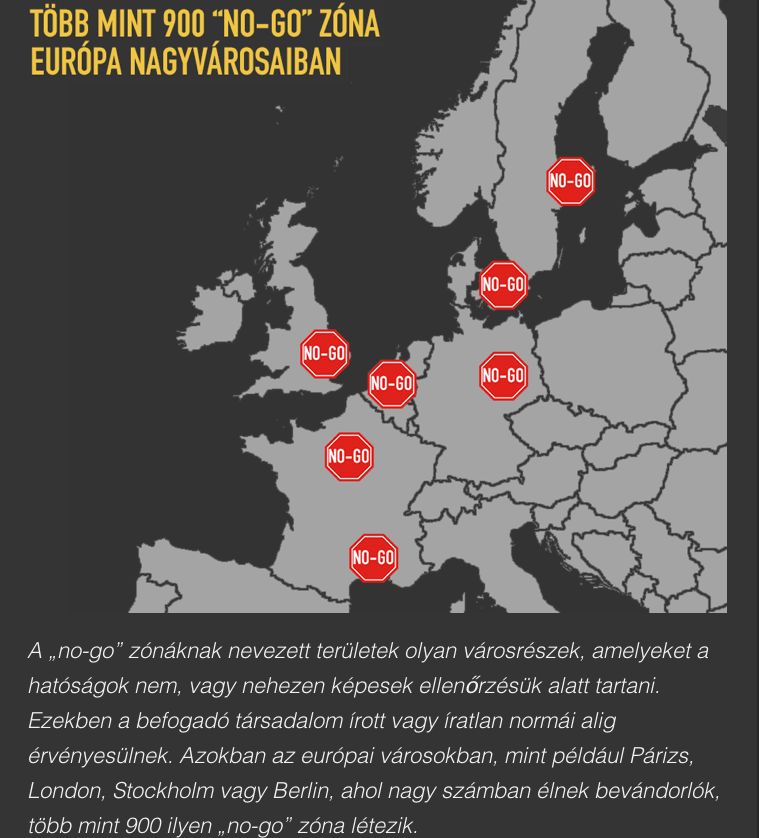 “Over 900 “no-go” zones in European metropolises: The “no-go” zones are parts of a city that authorities can’t or struggle to keep under their supervision. Within these areas the written or unwritten norms of the receiving society barely prevail. In European metropolises, such as Paris, London, Stockholm or Berlin, where migrants live in large numbers, there are 900 such ‘no-go’ zones.”

The idea of “no-go” zones is a debunked myth that is often cited in right-wing and anti-immigration circles, and it's unclear where the 900 number was pulled from. 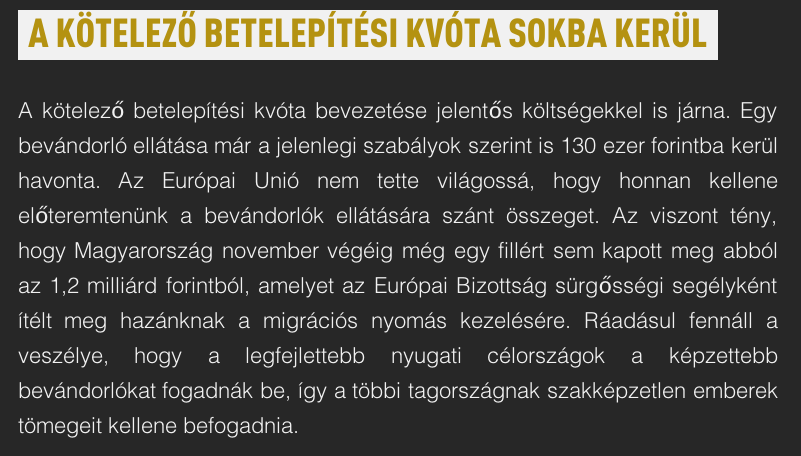 “The compulsory resettlement quota costs a lot: The introduction of the compulsory resettlement quota would have significant financial consequences. A migrant's provisions even based on the current regulations cost 130,000 forint [470 euros] per month. The European Union has not made it clear from where we should take the sum for the migrants. However, it is a fact that as of the end of November Hungary has not received a cent from the 1.2 billion forint [4 million euros] that the European Commission promised as emergency relief for the easing of the migratory pressure. On top of this, there is a danger that the most developed western nations will take in the most educated migrants, while the rest of the member states will have to take in masses of unskilled people.”

The EU resettlement plan outlines that beneficiary member states will receive 6,000 euros per refugee. This, in fact, has been an EU resettlement policy since 2008. During the summer months, the Hungarian government appealed to the EU for financial support and was promised an emergency fund of 4 million euros to help the country deal with the influx of refugees. This amount allegedly was not allocated, because the influx of refugees ceased and the country closed its borders.

The excerpt fails to mention the over 60 million euros allocated to the country under the EU's Asylum, Migration and Integration Fund and Internal Security Fund for the period of 2014-2020. Almost needless to say, the resettlement initiative does not operate on a pick-and-chose basis for various member states.

“The compulsory resettlement quota endangers our culture: With the compulsory resettlement, our nation’s ethnic, cultural and religious make-up would change. Illegal immigrants don’t respect our laws and don’t want to share our common cultural values. The mass resettlement of people from other continents and cultures therefore poses danger to our culture, way of life, habits and traditions. If we don’t act, in a few decades we will not recognize Europe.”

And finally, there's no evidence that refugees as a whole, as the government asserts, “don't respect our laws and don't want to share our common cultural values.”

Given the dubious claims and alarmist language, the Hungarian Helsinki Committee pointed out in a recent post that the Fidesz government must take the Hungarian people for idiots.

For many refugees arriving by boat to Greece, Hungary was a stop-over on their journey to more “friendly” countries such as Germany or Sweden. In early September, the Hungarian government barred refugees from getting on trains to Germany, forcing many to make the 170-kilometer journey on foot to the Austrian border. Human rights groups condemned the handling of the increasingly fraught situation as falling short of the country’s international obligations.

This culminated in the total shutting down of Hungary’s borders in mid-October. Although the flow of refugees into the country ebbed as a consequence, the government turned against the proposed EU emergency relocation plan to divide 120,000 refugees from members states on the front lines of the crisis among all EU countries. 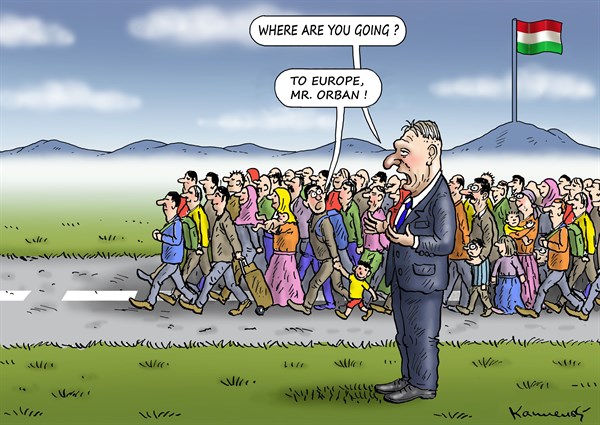 Initially, the plan aimed to resettle 15,600 refugees from Italy, 50,400 from Greece and 54,000 from Hungary. But Hungary “does not wish to be included as beneficiary of the emergency relocation scheme,” which would have meant that Hungary received 500 euros for every refugee relocated, notes the European Commission’s press release. Prime Minister Orban objected to the principle of the plan and also took issue with Hungary being categorized as a frontline country, maintaining that most of the refugees it received entered through Greece first. Czech Republic, Romania and Slovakia also opposed the scheme.

Recently, EU ministers have reportedly begun discussing the suspension of the Schengen zone — an agreement allowing for passport-free movement among member countries — for a two-year period. This would primarily affect Greece, but leaked documents suggest that the measure might be extended to other member states, including Hungary. The Hungarian government is appalled, and has even helped found a “Friends of Schengen” initiative with other Eastern European countries. However, it is unlikely that such pressures will have an affect on the government's anti-refugees and anti-EU rhetoric.