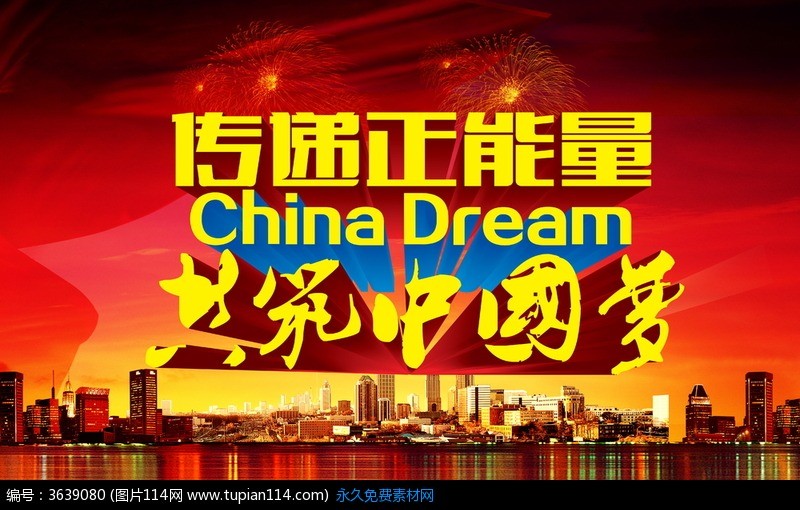 “Spread positive energy and build the China Dream” is a propaganda strategy under the leadership of Xi Jinping. Image from online banner generator tupian.

But positive energy can only do so much in the face of depressing news dominating the headlines, such as toxic smog blanketing Beijing and parts of the north.

To combat this, Jiang Jun, the spokesman of China's State Internet Information Office, is urging IT and Internet companies to allocate part of their funds meant for charity to those who “spread good news.”

In a meeting attended by major online portals, news outlets and Internet businesses such as Alibaba, Baidu and Sina, at end of November, Jiang criticized the IT and Internet sectors for their lack of commitment to charity work. “Deer Murmur,” a blogger from Watching CN paraphrased and quoted Jiang's suggestion during the meeting:

The Internet is not just an information platform, but also a knowledge, business and service platform. It also distributes public emotions, feelings such as anger and resentment. How can we resolve emotions like resentment? We can make use of charity work “to encourage netizens to cultivate goodness, forward good news, do good things and be a good Samaritans. Some overseas sites give awards [to netizens] if they spread good news, some sort of subsidy.” […] We can treat this as a campaign to lift people out of poverty. Currently, we have 600 million netizens and more than 70 million of them are living in poverty. The ratio of the better off to poor is about nine to one. We can let the nine who are better off help the one who is poor.

Currently, most IT and Internet giants have dedicated charity departments to raise awareness of issues and collect funds for organizations that, for example, help the disadvantaged or undertake disaster relief work. However, funneling resources toward subsidizing those who “spread good news” implies that these companies would shoulder the expenses of the government and party's propaganda paid online commentators (commonly known as the 50-Cent Party).

‘You call this positive energy?’

The news presented a suspected case of abduction and rape of a mentally disabled woman as a touching story of a poor man raising his young child alone. The story was tagged #positiveenergy on Weibo, a popular Chinese social media platform:

Zhang Boyong said his family is poor. Even though he and his brother are old, they remained single. Ten years ago, he met a mentally disabled woman while he was picking up recycling items from the rubbish. Three years later, the woman gave birth to a baby girl. He dared not go out as he was worried that others would find out. When the baby was three months old, her mother ran away. He did not look for her as he had to take care of the baby. “I have a physical disability and cannot do hard work. My brother would go downtown to pick up recycled items and earned about 600-700 yuan [approximately 100-120 US dollars] a month.

[…] Though he had to borrow money, he sent his daughter to kindergarten. “The school fee was about 1,000-2,000 yuan for six months. We had to eat less and save money for school,” Zhang said. He did not have a marriage certificate with the women so the child did not have a birth certificate. The girl still does not have household registration. “Without household registration, she cannot even attend primary school.” […]

Party mouthpiece People's Daily repackaged the news as a heartwarming story of a lower-class single parent, highlighting the five-year-old girl's care for her disabled father. Yet many netizens spotted the gaps in the narration and retold the story on Weibo (via China Digital Times):

It's a question, did the mother run away or was she murdered? Why did she disappear after giving birth? Why didn't she run away before the child was born? Take care of the kid and arrest the criminal!

Putting the rapist in jail and finding the little girl a good foster family is positive energy. So many stupid people with no legal sense are taking up propaganda work.

WTF…. raping a mentally disabled woman and giving birth to a kid who has to live in misery and you call this positive energy? Perhaps the editor would like to experience this kind of positive energy. I promise that I won't report it to the police. Bye-bye.

Judging from the above case, if Internet giants are to subsidize those who spread positive energy as suggested by Jiang Jun, the line between good and bad, right and wrong might become thinner than ever.