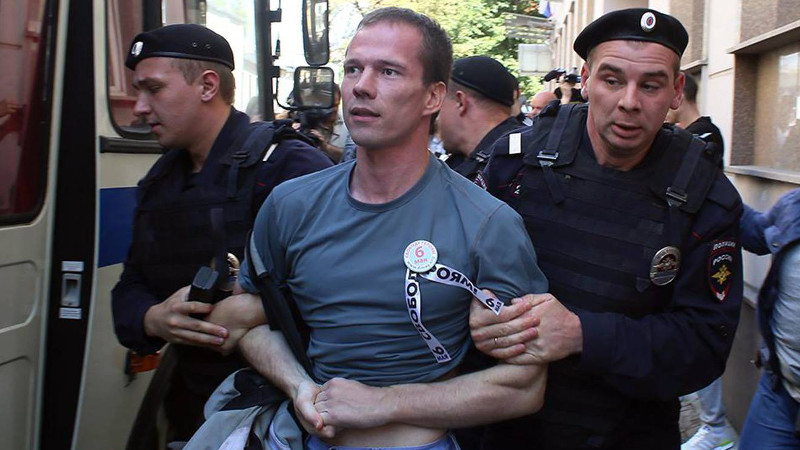 Ildar Dadin being detained at a protest rally. Image from Anastasia Zotova on Facebook.

A Moscow court has sentenced a protester to three years in prison for peaceful protests under a new law regulating unsanctioned protest activity introduced last year. Human rights activists believe the law is yet another means of repressing dissent in Russia.

On December 7, the court found Dadin guilty of “repetitive violation of the regulations on public events,” and delivered the sentence the same day. Dadin has already spent 10 months under house arrest. He has also previously received administrative sentences for human rights-related activity, spending 7, 10 and 15 days in detention.

Speaking in court, Dadin pleaded not guilty and called the case against him a “shameful persecution based on an unconstitutional law.”

I am ready to go to jail for my beliefs. I have fought and will continue to fight for my rights.

A video from the courtroom shows the moment the verdict was read and the outcry immediately after.

In case you guys missed it, a Russian court went ahead and jailed a non-violent protester for three years. Three. Goddamn Years.

Other users saw harsher sentences for peaceful protest as a logical development of Russian state cracking down on free expression and civic activism.

Human rights defender Pavel Chikov was almost resigned in his reaction and said suspended sentences for protesters were fast becoming a “positive outcome.”

I've long said that those engaging in civic activity in Russia today should be prepared for three years in a penal colony.

Human rights organizations, including Memorial, Freedom House, and others, have also spoken out against the verdict. Amnesty International called the sentence a “shocking and cynical attack on freedom of expression.” 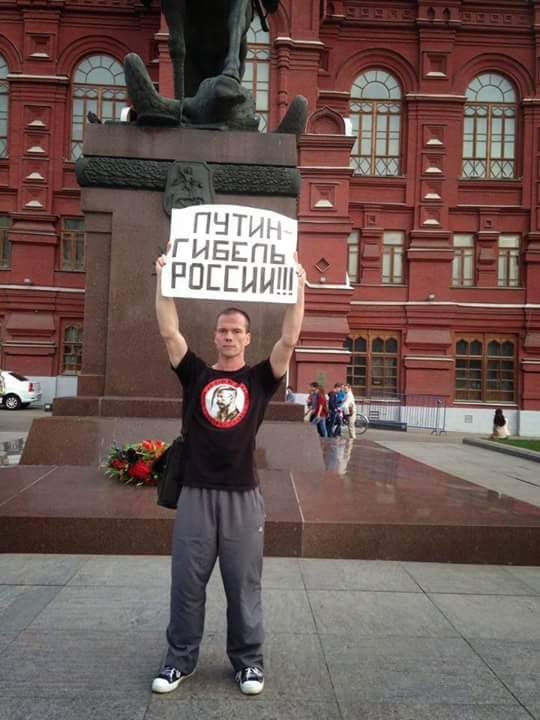 Ildar Dadin at a single-person picket in Moscow in 2014. Poster reads: “Putin is the downfall of Russia.” Image from Facebook.

Dadin's fiancée Anastasia Zotova, in a blog post about his activism and his personal life, described him as a kind, caring person and denounced the sentence.

He always demanded that the police adhere to the law. This is a person who sincerely wants to make his country better. And his favorite phrase is “honor and humanity above all.”

Three other Russian activists, including Mark Galperin and 75-year-old Vladimir Ionov, have been charged with a similar crime for peaceful dissent and single-person picketing.

In a January 2015 interview with Open Russia, Dadin talked about becoming a civic activist and said his dream was to build a “lawful state” in Russia.

To everyone who wants to know my opinion, please say: “Russia must be free. I'm not sure it will, but it must.”