Four Months Later, Still No Answers About a Shootout with Salvadoran Police and Army That Left Five Dead 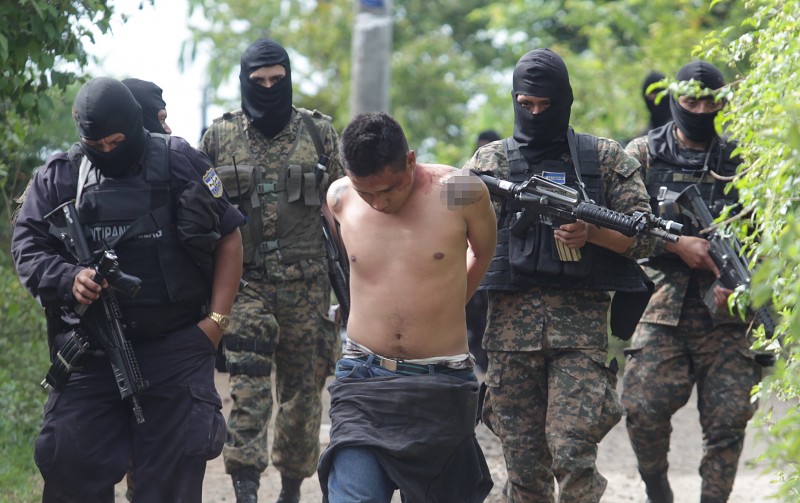 An alleged armed gang member was detained during the search by the Salvadoran army and police. Photo: La Prensa/Francisco Alemán, used with permission.

The original version of this article was written by Suchit Chávez and Ezequiel Barrera for La Prensa Gráfica de El Salvador and was published on the CONNECTAS website, thanks to an editorial agreement on mutually disseminating content.

Five dead bodies discovered at a house in Panchimalco's Pajales region in El Salvador. That was the result of a joint exercise police-military operation in August this year.

According to the official version of events, police and soldiers joined forces to investigate after detecting the movements of gang members in the area. When they arrived, they say they were greeted with gunfire and so they fired back. When the dust settled, no police or soldiers had been killed.

Caught in the crossfire, but luckily managing not to be hit, were an elderly man, a woman, and three younger women with their children: a two-year-old girl and a four-year-old boy. Three days after the shootout, one of the young women disappeared.

This is the official version of events, but it's not the only account of what happened. According to the mother of one of the families present:

When the soldiers came in, behind the men, they weren't letting anyone leave. I was locked in the other room, screaming for them to let my daughters and grandchildren leave.

Camila, a young woman in her twenties who also lives at the house, says five men in the building were in fact armed, but she says they threw their weapons to the ground after hearing the children crying. According to Camila, once disarmed, the men were taken from the room where they hiding and brought to a small patio where the family keeps farmyard animals. Police and soldiers allegedly lined them up against the wall and peppered them with bullets, before dragging their bodies back into the house. (This version of events would explain why there was a pool of blood discovered on the patio, where no bodies were found.)

On the evening of August 19, three days after the incident, Camila disappeared while returning home from work.

The day the five gang members’ deaths became public knowledge, a series of gruesome photographs began circulating on social media. Reporters confirm that the house they visited matches the spot where the bodies were photographed. The clothes discovered also match the description of the five autopsies performed by the Institute of Forensic Medicine.

According to the autopsy report, Luis Benítez, one of the gang members, died from five gunshots. He received at least three bullets near his left shoulder and another two in his chest. In both areas, according to the medical examiner, there were “extensive areas of powder tattooing,” which is when gunpowder particles become embedded in the skin when fired upon at close range (at a distance no farther than 1.5 meters, or 5 feet).

Analyzing the photographs and comparing them to the autopsies, many online are asking how the bodies ended up in the positions they did, in a space so small during a firefight. How were none of the other seven people in the building injured during the crossfire? And why would police and soldiers have fired into a home with two children present (who were reportedly crying loudly).

The oldest victim, Miguel Benítez Jorge, was shot eight times. One of the bullets punctured Jorge's right lung, after entering his back and exiting his chest. If Benítez Jorge was in fact shooting and, as the official version states, died while confronting the police, how was he shot in the back? Also, if he was shot in the back, why was he found on his back? In the photographs, Benítez Jorge appears with a rifle on his person.

In a press conference on August 27, El Salvador's minister of defense, David Munguía Payés, confirmed that the Army is carrying out an internal investigation, as is standard procedure with any shootings involving soldiers. Payés says he hasn't yet received a final copy of the report, however, and so he remains unable to draw any conclusions. “But everything points to the fact that [the police and military] acted in accordance with the law,” he insists.

According to human rights attorney David Morales, “since last last year, several supposed confrontations between the police and criminals have occurred, many of which have ended with the deaths of said criminals, without any serious injury to the police themselves”:

We have determined that there isn't any serious oversight regarding these proceedings. It seems to us that there is the danger that these operations have produced arbitrary executions.

To read this article in Spanish, click the banner below.