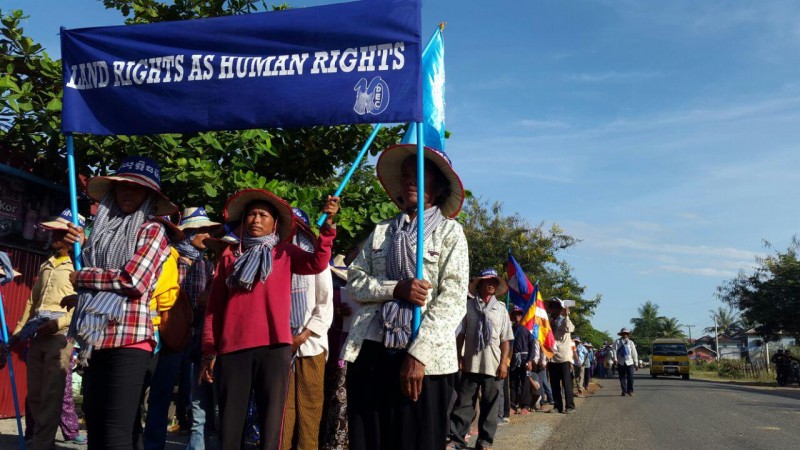 The group in Kampong Speu reached the provincial capital Chbar Morn. The issue of land rights is a major political demand in Cambodia. Photo from Licadho, a human rights group.

Thousands of Cambodians across the country are marching towards the capital city of Phnom Penh to celebrate International Human Rights Day on December 10. Some of the activists were blocked by the police in several provinces and the government has already banned protests in Phnom Penh, but the march continues to receive public attention and support.

The protest march, which began on December 6 in 12 provinces, aims to highlight the theme of justice in time for the celebration of International Human Rights Day. The original plan is to submit a petition containing five demands addressed to the national government:

- For resolutions to land conflicts;
– Reform of the judicial system and the release of human rights defenders and activists;
– A raise in the minimum wage and respect for labor rights;
– An end to state-sponsored violence; and
– Respect for freedom of expression, association and peaceful assembly.

In recent years, land conflicts have displaced thousands of farmers, indigenous groups, and villagers because of development projects and land concessions. The government is accused of using violence to evict residents from their homes. Some of the victims of these land rights violations are among the Cambodian farmers who are now marching towards the capital.

Meanwhile, the demand to raise the minimum wage highlights the poor conditions of workers in the country. Since last year, garment workers have launched strikes and other forms of protest to demand an increase in their monthly minimum wage, which is among the lowest in the Southeast Asian region.

This year’s human rights celebration is also politically significant since the ruling party, which has been in power for more than three decades already, is accused of persecuting the opposition and other critics of the government. The decision to ban protests in the capital’s freedom park is an indicator of rising political tension.

But despite these challenges, the march for land, justice, and human rights travels on. Below are some photos taken in the provinces of Cambodia of these grassroots activists asserting their right to celebrate International Human Rights Day: 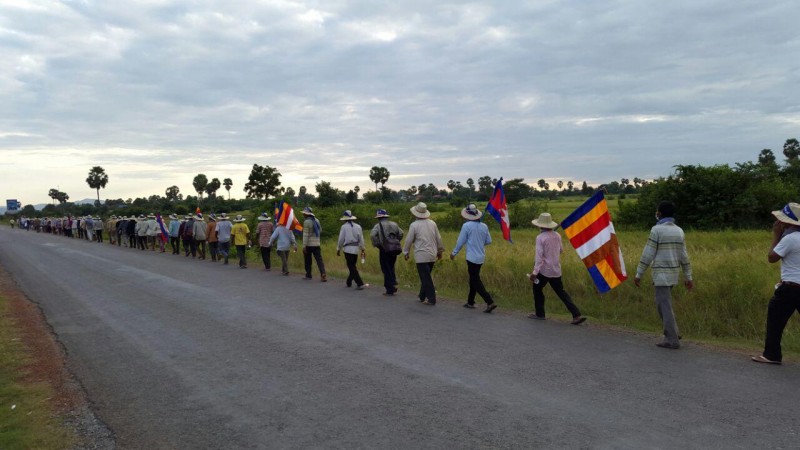 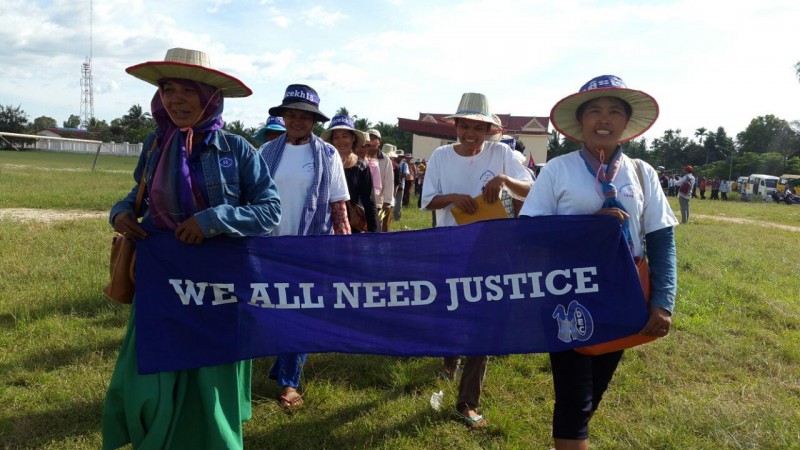 The group submitted two petitions to Koh Kong provincial government: one calling on the government to respect human rights, and the other calling for the release of three environmental activists. The arrested activists are leading the campaign in Areng Valley against a proposed hydroelectric dam. Photo from Licadho, a human rights group. 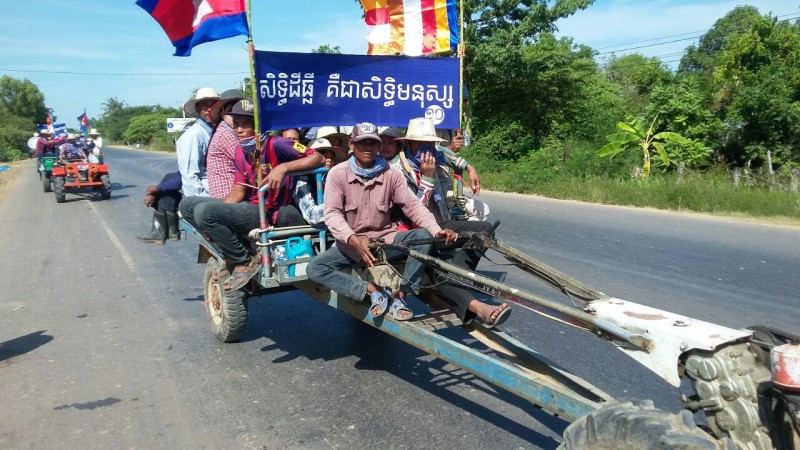 In Banteay Meanchey, about 600 people joined a tractor and tuk tuk (traditional three-wheeled vehicle) procession from Poipet to the provincial government office in Banteay Meanchey town. Photo from Licadho, a human rights group. 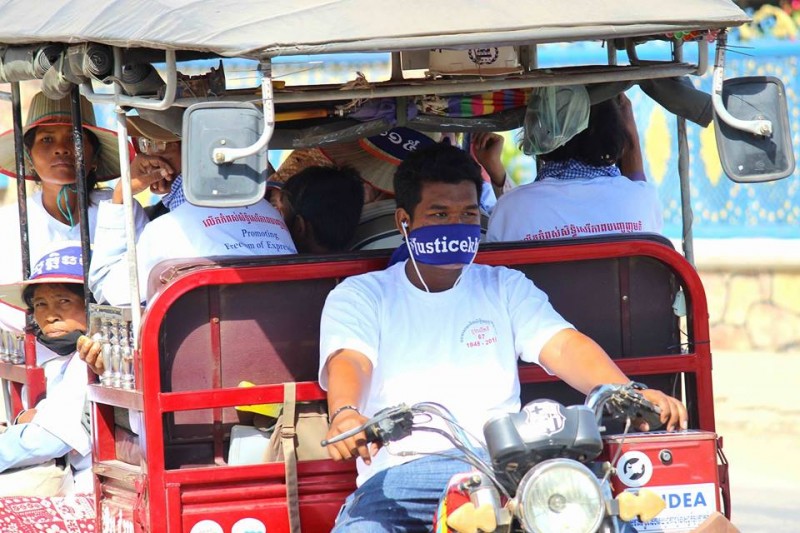 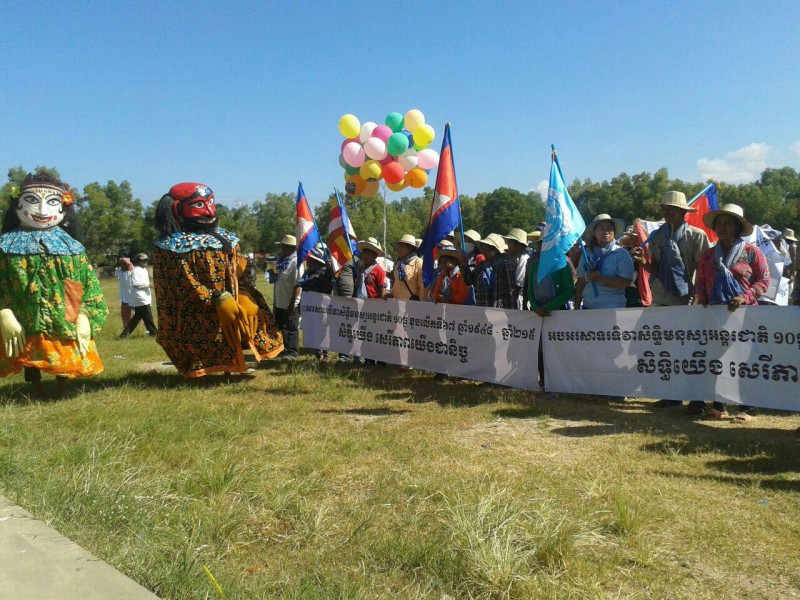 About 700 people in Kampong Chhnang carry puppets to represent rights, freedom and good luck for all marchers. Photo and caption from Licadho, a human rights group.