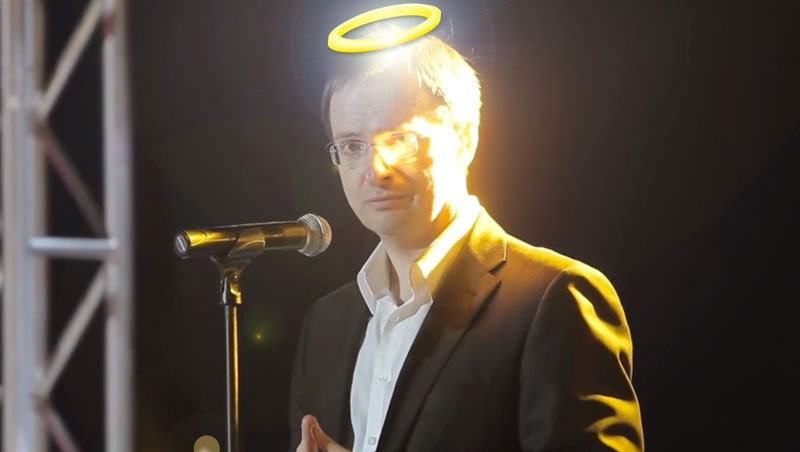 Russian Cutlure Minister Vladimir Medinsky speaking at the grand opening if the Pomegranate Hotel in May 2014 in Greece. Edited by Kevin Rothrock.

The same day that the documentary film festival Artdocfest kicked off in Moscow, Russia’s Ministry of Culture issued an official warning to organizers, alerting them to potential liability for showing films without the proper distribution certificates. The government’s warning comes less than a week after Artdocfest announced that it is including in a special online competition a film by anti-corruption activist Alexey Navalny’s group about the corrupt business dealings of figures close to Attorney General Yuri Chaika (namely his son, Artem).

According to Vitaly Mansky, Artdocfest’s president, the festival is showing several films made in Russia without Russian distribution certificates, but the rights to the films were sold to a Latvian company, thus removing the need for such documentation, Mansky says.

Alexey Navalny published the documentary film “Chaika” on December 1. Since then, the video has attracted more than 3 million views and nearly 14,000 comments. It has 77,000 “up votes” and a bit more than 3,300 “down votes.” In the film, Navalny’s team from the Anti-Corruption Foundation lays out detailed evidence connecting Chaika’s son to business dealings that link him and other relatives of top officials in the Attorney General’s Office to known mobsters. In the first 90 seconds of the film, Vladimir Medinsky, Russia’s minister of culture, also appears in footage from the opening ceremony for a luxury resort in Greece partly owned by Chaika’s son.

Today, following news of the Culture Ministry’s warning to Artdocfest, Navalny released on YouTube the full video of Medinsky’s speech from the Pomegranate Hotel’s opening ceremony in May 2014. Navalny also repeated public demands for information about why the culture minister attended, who paid his airfare and lodging, and what his connection is to Chaika’s son and the hotel’s other owners.

Though Artdocfest has formally included “Chaika” in the festival, the film won’t actually be shown to audiences. Instead, the movie is in competition for “Artdocset” (ArtDocNet), where the festival’s Facebook community votes on its favorite films already released online. Currently, more than 1,200 Internet users have voted, and Navalny’s documentary leads with 792 votes.

According to the newspaper Novaya Gazeta, which helped Navalny’s team produce its report on corruption in the Attorney General’s Office, spokespeople for the Culture Ministry have refused to respond to questions about links between the warning to Artdocfest and Medinsky’s apparent ties to the subject of Navalny’s film.