Trinidad & Tobago Faces Economic Recession — But Who's to Blame? 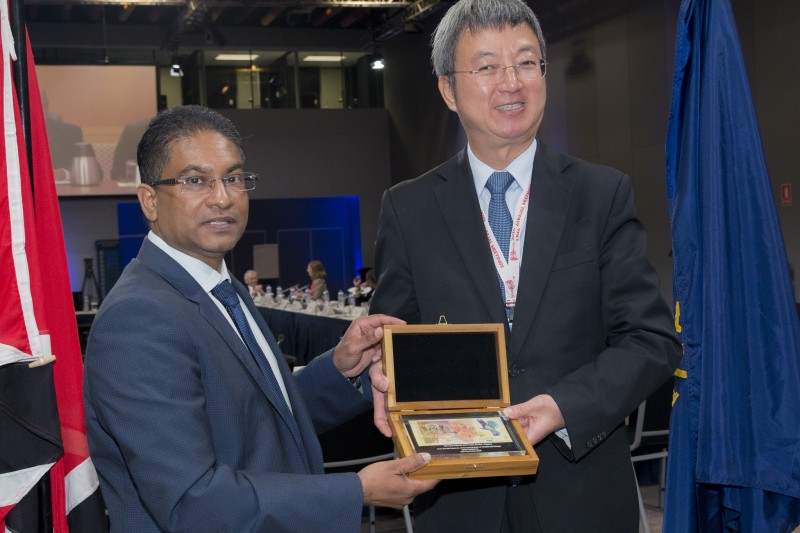 Former Prime Minister of Trinidad and Tobago Kamla Persad-Bissessar won internal elections to retain her leadership of the United National Congress party, now in opposition, on December 7, 2015. The voter turnout, however, was low — one Facebook user joked that “there are mas [Carnival] bands bigger than the UNCs turnout today” — suggesting a level of disillusionment with the party's performance and the state in which it has left the country.

That state is a precarious one. Governor of the Central Bank of Trinidad and Tobago Jwala Rambarran, who was appointed under the Persad-Bissessar administration but has retained his post thus far under the new government, announced on December 4 that the country was “in a recession” and went on to identify some of the companies that are the largest users of foreign exchange. While some wondered whether this was information that should have been disclosed, many felt that this was overridden by citizens’ right to know how their money was being used.

According to Victor Hart, chairman of the Extractive Industries Transparency Initiative Steering Committee (EITI), the foreign exchange in question is being generated by the sale of the country's oil and natural gas exports — resources that belong to the people of Trinidad and Tobago:

This information therefore empowers civil society to lobby government on finding a more efficient use of the US currency that is earned by those natural resources. It is a tool for citizens to agitate for better management of our money. We've been too complacent as a people. We have an inalienable right to know how our natural resources are being used, because it is the people's patrimony that is generating the foreign exchange.

Rambarran might have been transparent in revealing the biggest sources of demand on US currency, but failed to be up-front with the new minister of finance, Colm Imbert, about the state of the economy. Given that he made the statement about recession without informing him, Imbert complained that the Central Bank governor was not doing what was required to keep the government properly informed of its policies, or to support the monetary policies of the government. Because of the drain on the Central Bank's foreign exchange revenues, even regular citizens have been having trouble accessing US dollars — most banks have been imposing a daily US $500 withdrawal limit on customers.

Facebook user Rhoda Bharath was incensed about Rambarran's modus operandi, and called for him to be sacked:

Jwala aware that he working for us?
Why is he being so difficult about communicating with the Finance Ministry?
I have no confidence in his professionalism or responsibility.
He has to go.
Fire his ass now!

Journalist Raffique Shah, guest blogging at the satirical website Wired868, shared the sentiment, saying that the recession Rambarran has suddenly noticed was predictable:

This recession did not creep up on us like the proverbial thief in the night. It was long in the making.

In fact, from as far back as the global financial crisis of 2008-2009, when Clico [a major, regional insurance company] collapsed and the price of oil plunged from a brief high of US$140 a barrel to US$30, informed, patriotic citizens were warning governments: to go easy on the wild spending, to set aside more savings in the Heritage and Stabilisation Fund [an account established to set aside energy revenues for a rainy day], to wean the population off dependency on subsidies, and, most of all, to diversify the economy from its over-reliance on oil, gas and petrochemicals.

He placed much of the blame for the country's current economic reality squarely at the feet of Persad-Bissessar's People's Partnership government, who spent wantonly amidst falling oil prices:

In the face of such stark realities and grim prospects, the PP Government increased spending, scraped the bottom of the NGC [National Gas Company] barrel for every available dollar, sold off some of the family jewels (FCB [First Citizens Bank] and PPG [Phoenix Park Gas Processors]-NGL shares), extracted everything it could from the Central Bank, and, on top of that, borrowed beyond the $70 billion debt ceiling it established in 2011.

The Eternal Pantomime concurred, referencing the parliamentary debate that took place last Friday, in which “Minister of Finance Imbert wanted to raise the debt ceiling”:

The moment I read the motion on the Parliament’s website, I got concerned. Raising the debt ceiling doesn’t affect the current work force. I’m currently paying off the debt [former Prime Minister] Patrick Manning’s years in office incurred. Raising the debt ceiling will be affecting the generations that are not yet old enough to vote and select a government. No, not the ones in secondary school. They will be paying off Kamla’s debt. The children just entering day care.

In summary, if we are to believe the details of the presentation read out by Finance Minister Colm Imbert, the UNC government led by Kamla Persad-Bissessar, had just as big a role in creating the recession we are now in as declining oil prices. What kind of government sees economic ruin looming and keeps borrowing and spending?

Of course, Trinidad and Tobago has been here before. While the Wired868 post recalled the economic recession of the 1980s and the lessons that should have been learnt from it, The Eternal Pantomime simply could not get over the brazenness of the Central Bank governor's announcement:

It was a calculated move on Ramberran’s part. Meant to stir up angry sentiment among the population just prior to a Parliament sitting asking for the government to be able to borrow more. But Ramberran’s counter-coup has blown up in his face. Because it appears that the Governor has been keeping secrets from the population. The Trinidad Express published a story in the middle of August 2015 wherein then finance Minister, Larry Howai, glibly stated that we were no where near a recession. Then we would have already experienced two consecutive quarters of economic contraction and entering into our third. […]

Was Governor Ramberran aware of the economy’s contraction? If he was, why was he silent then? Was he colluding with the former Minister of Finance to present a picture of a healthy economy? If he was not aware, why was he not aware? Can we trust him to have the country’s best interests at heart? Is he working with or against the current Minister of Finance? Can the obvious tensions between the two of them lead to even further economic crisis?

There are more questions than answers at this point, and significant public outrage:

I am […] very angry with those who led us down this trip to nowhere, this descent into hell. What hurts even more is that they will continue to live in luxury as the masses suffer the consequences.

How I wish they could be in jail instead.

Meanwhile, Kamla Persad-Bissessar and her administration refuse to take the blame for the country's economic crisis.