Trinidad and Tobago’s United National Congress Retains Its Party Leader, But at What Cost? 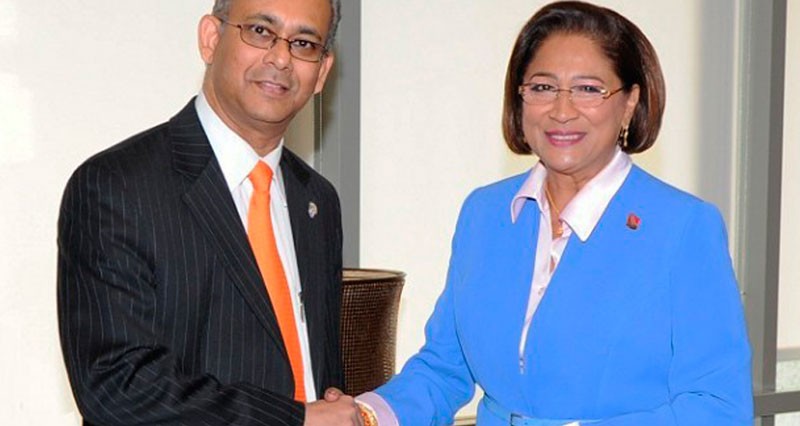 Perhaps the second most anticipated elections in Trinidad and Tobago, other than the country's recent general elections, occurred last night, when voters cast ballots in internal elections for the leadership of the United National Congress (UNC), the main political party in the previous coalition government, which was ousted by the People's National Movement on September 7, 2015.

After losing the general elections, there were several camps within the UNC that blamed the party's defeat on the performance of its leader, Kamla Persad-Bissessar, the country's first female prime minister, whose administration was plagued by allegations of fiscal mismanagement and corruption (not to mention sordid accusations of misbehaviour).

Persad-Bissessar's two main rivals for the party's leadership were Roodal Moonilal, who was Minister of Housing, Planning, and the Environment in her government, and Vasant Bharath, who was the former Minister of Trade, Industry, Investment, and Communications. When the preliminary results were finally revealed early this morning, Persad-Bissessar had won with 15,477 votes, compared to Moonilal's 1,466 and Bharath's 1,102. Shortly afterwards, the official UNC Facebook page announced:

Persad-Bissessar's road to victory was far from easy, with opponents throughout the campaign harshly criticising her leadership. Despite these tensions within her own faction, Persad-Bissessar has demonstrated her interest in focusing on the political battles to come, saying after her reelection:

We are all members of the one UNC family and at the end of tonight and tomorrow we have to unite because the real enemy is the People's National Movement.

Many netizens took this to mean that the UNC intends to continue its tribal approach to politics at the expense of the nation's interests. A comments thread exchange between Facebook users Rhoda Bharath (RB) and Barbara Jenkins (BJ) responded to a question about why people have followed this campaign so closely:

BJ: we have a vociferous, misrepresenting, cantankerous, ill-advised and ethnically-partisan opposition. We do not have a strong opposition.

RB: Exactly! So this internal election meant there was the possibility to put forward better leadership material. They squandered that opportunity. And so, we are without an Opposition.

A fragmented opposition seems to be unavoidable, considering the spirit with which the elections were fought in the first place. Facebook user Patricia Worrell quipped:

I wonder what it's like to be Looneylal and the Lunatics this morning?
Because having made their real thoughts clear, they must now go home to the UNC, and humble to Kamz! KNOWING they got their asses soundly whipped too!
NOT a pleasant thought!
‪#‎hehehe‬

Even up to last night, Persad-Bissessar's challengers were raising doubts about the quality of the electoral ink that was used, suggesting that because it could be washed off so easily, it was possible that mischief-makers were voting more than once. In fact, Moonilal has said he will seek legal advice on the matter. There were also other hiccups: some voters complained that their names did not appear on the list, and there was a bomb scare at a polling station located in In Siparia, which is Persad-Bissessar’s constituency and the party's largest support base.

Still, there is no disputing that Persad-Bissessar has won by a landslide. In a public post, Facebook user Vedavid Manick said:

Not withstanding the irregularities of the elections being reported, it seems as though Mrs. Kamla Persad Bissessar has again emerged victorious on the internal election battle. Congratulations to her. Here is my wish list of her and her team. […]

Whatever you may think about Keith Rowley and the PNM, if their intentions are good, then in these hard economic times, it is in my personal interest that they be successful at a genuine objective. After all they are government, and in Westminster politics, it is their sole decision that guides policy. HOWEVER, it is in my personal interest too, that the opposition be a strong and united force that will logically voice the alternative philosophies that will keep our country safe. More than ever in these trying times is that voice important. This is what the country needs, a strong voice to protect the weak, and to be an opposition in waiting. […]

I expect you to work with all victorious or non victorious. This is your duty. This is what democracy is about. Everyone has a right to challenge, but now that the dust has settled, you are obliged to ensure that none feel persecuted for their stance.

Good luck. The nation is looking on.

3 months after a GE [General Election] wherein it won 18 seats and had roughly 280,000 people vote for it, the UNC's Internal Election can barely scare up 10,000 voters.
There is nothing for Kamla to celebrate.
The Opposition is non-existent as a force. The country has to be its own sentinel now.
The only song that should be on repeat today is Party Done.