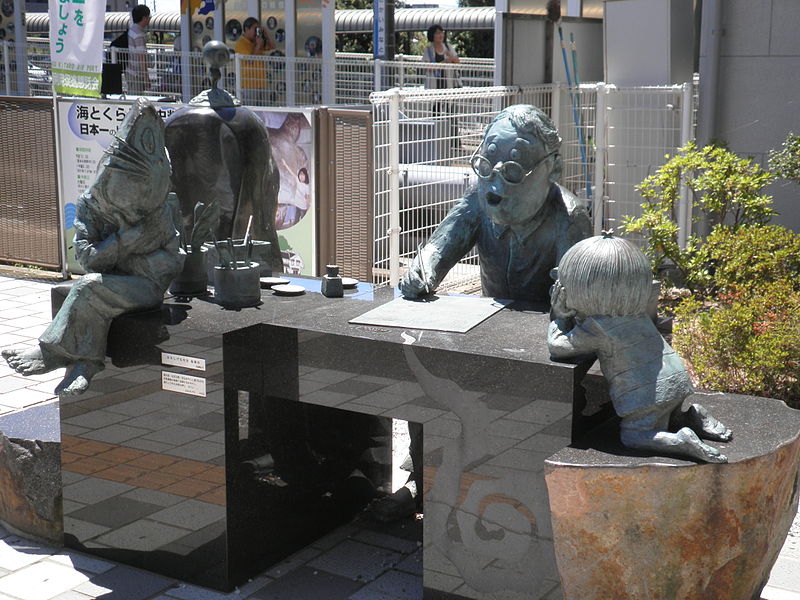 Bronze statues of Mizuki Shigeru and some of his creations in Sakaiminato, Tottori Prefecture. Image from Wikipedia.

Renowned Japanese manga illustrator, folklorist, and pop-culture icon Mizuki Shigeru (水木しげる) died on Monday, November 30, 2015. He was 93. In many ways, Mizuki represented the pacifism and humanism of post-War Japan.

A veteran of World War II, Mizuki served as a conscript in the Japanese Imperial Army, and was stationed on New Britain Island in Papua New Guinea.

His horrible experiences of war on the island (many of which he documented in a variety of books that are available in English translation), which included losing an arm and then being cared for by the local inhabitants of the island, influenced Mizuki's work for the rest of his life.

After surviving the war and being demobilized in 1945, like millions of other returning soldiers, the one-armed Mizuki struggled to find a way to make living in rural Tottori Prefecture.

He would go on to become a best-selling author, publishing hundreds of books. 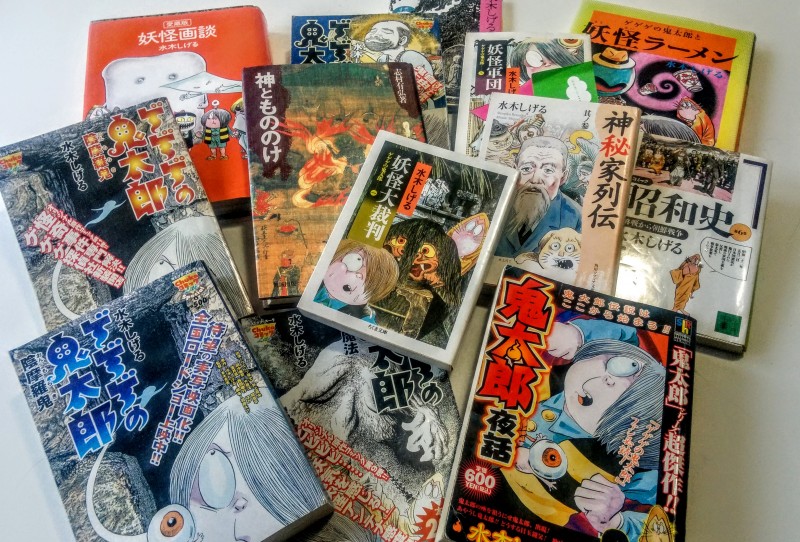 Mizuki Shigeru published hundreds of books during his long career. All of them explored and often remixed Japanese folklore in cartoon form. Image by Nevin Thompson.

Thanks to the inspiration of Non Non Ba and other sources, Mizuki Shigeru drew rich depictions of traditional Japanese yokai. However, Mizuki was careful to pay attention to and record the unique traditions of everyday Japanese people from typically obscure parts of Japan.

Traditional depiction of a gashadokuro. Mizuki made it his life's work to explore and document the source of Japanese mythical ghosts, monsters, and spirits known as yokai. Source: Wikipedia.

While Mizuki started out as an entertainer, his knowledge and deep appreciation for the lives of everyday Japanese “folk” have sometimes led him to be compared with the pioneering Japanese folklorist Yanagita Kunio.

Like Mizuki, Yanagita also avoided creating chauvinistic tropes that could stereotype Japan as a homogeneous culture and nation, and instead described practices and beliefs unique to each region of Japan.

Mizuki Shigeru is probably best known for his long-running manga and anime series Ge Ge Ge no Kitaro, which tells the adventures of a one-eyed ghostly boy, and his dead father who has been reincarnated as a talking eyeball.

What a blow [that Mizuki Shigeru has died]. Thank you for creating Ge Ge Ge no Kitaro, Mizuki-sensei. I'll make a trip to Mizuki Shigeru Road again someday. May you rest in peace.

Alongside his yokai friends, Kitaro fights various monsters and demons from Japanese and Western folklore.

The manga series has become so popular that Mizuki's birthplace, the small seaside city of Sakaiminato, has dedicated an entire street to the series, and to the cartoonist himself called Mizuki Shigeru Road.

It is now a popular tourist attraction about three hours by train from Osaka in western Japan.

A Life Influenced By the Spirit World

Mizuki Shigeru (born Mura Shigeru) was born in rural Tottori Precture in the small port town of Sakaiminato on the Japan Sea.

At this time, Japan had been “open” to the West for less than a hundred years, and many old traditions still remained.

Mizuki Shigeru bought some little potted bedding plants at the local DIY center…  “Aren't they beautiful? It's like the spirit of the forest [in my office].” — Mizuki Production Company

Mizuki wrote that his deep interest in the Japanese spirit world was fostered by conversations with an older woman known locally as Non Non Ba (のんのん婆) whose family was said to have connections to the local pagan (or “Non Non”) Shinto community of the region. 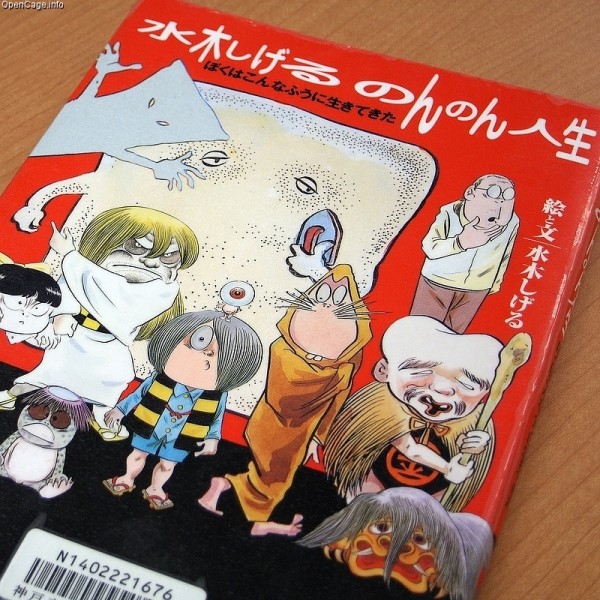 For the rest of his life, Mizuki Shigeru sought out folk customs and beliefs from every corner of Japan, and would eventually title one of his many autobiographies “A Non Non Life.”

While “non non” can mean “aimless” or even “drunken” in colloquial Japanese, it's obvious that Mizuki felt a deep connection to the Japanese spirit world, as well as to ordinary Japanese people and communities often forgotten or overlooked by the mainstream.

After losing an arm in the war, while stationed on New Britain Island in Papua New Guinea, Mizuki experienced the generosity of the locals, who provided food and shelter to occupying troops.

Mizuki was also struck by the similarity between the animist beliefs of the Tau people in New Britain, who helped care for him during the war, and the folklore and pantheon of yokai in rural and regional Japan.

Thanks to Mizuki's enormous success as a manga illustrator, storyteller, and cultural icon, it's possible to say today that Melanesian culture has played a role in the development of post-War Japanese pop culture.

While Mizuki Shigeru is known for his whimsical and often surreal depictions of the Japanese spiritual world, he also took pains to document the history of Japan's Showa era, which last from 1926 until 1989.

A great many dramatic events occurred during the Showa period, including Japan's invasion of China and the South Pacific, as well as a war with the United States and other countries, before Japan surrendered unconditionally in 1945.

Even as Japan “miraculously” recovered following the war, Mizuki Shigeru observed and remembered Japan's experiences during the war in his manga works.

His four-book Showa History series, which has been been translated into English and published by Canada's Drawn & Quarterly, includes descriptions not only of the horrors of war that he himself experienced, but also atrocities committed by Japanese soldiers in Korea (a Japanese colonial possession until 1945), China, and other countries.

While post-War neoconservatives such as Kobayashi Yoshinori have also taken to manga to promote a revisionist view of Japan's wartime conduct, none of them have enjoyed the success of Mizuki Shigeru, whose manga characters—all presenting Mizuki's humanist and pacifist worldview—have gone on to be featured in everything from feature movies to nail art.

Here's my Ge Ge Ge no Kitaro nail art. I'm going to wear it and stroll down Mizuki Shigeru Road on my way to the museum.

Mizuki Shigeru's death on November 30 sparked an outpouring of grief:

Ah, Misuki Shigeru-sensei… Just remembering when I first encountered your splendid creations as a child, my appreciation for you has been rekindled. I'll never forget your words, “No matter how old a person is, we never stop learning and can become a better person.” But I'm crushed [to hear about your death]. Thank you very much for all that you have, and I pass on my love and sincere appreciation.

A popular illustrator shared his own thoughts about Mizuki's passing with his Twitter followers:

1/2 There is a story Mizuki Shigeru told that has really left an impression on me. During the war Mizuki said he was once in the pitch-black jungle when he suddenly bumped into a wall. The wall totally blocked his way, and he fell down, immediately falling fast asleep. When he awoke he discovered the wall had disappeared, and that he was standing on the edge of a cliff above the ocean.

2/2 Mizuki says that ghostly “nurikabe” wall saved his life. While I've never seen a ghost, I think Mizuki really did encounter something in the jungle. If we think that way, the world becomes a more interesting place, doesn't it?—May Mizuki Shigeru rest in peace. I myself have always liked Ittanmomen.

Someone else posted some words by Mizuki Shigeru that inspired them:

Do what you like to do. That's why we are born in the first place.

For readers who are interested in learning more about Mizuki Shigeru, Drawn & Quarterly Press offers many translations of Mizuki Shigeru's works.

This post has been updated to reflect that Drawn & Quarterly is based in Canada.