A Syrian Family in California Feels the Post-Paris Chill 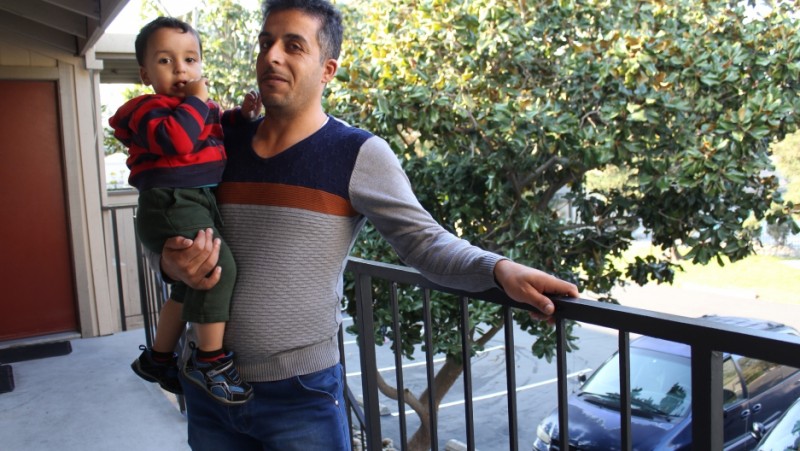 Gasem Al Hamad and his son, Mohamad, at their new home in Turlock, California. The Al Hamad family fled war in Syria and, after a three-year journey, arrived to the US as refugees. Credit: Monica Campbell. Used with PRI's permission

This article by Monica Campbell for The World originally appeared on PRI.org on November 30, 2015, and is republished here as part of a content-sharing agreement.

When I first visited the family, Gasem Al Hamad, the dad, was about to take his driver’s test. Good news. He passed. When we pull up to their apartment complex, so does Al Hamad, driving his minivan.

Was the test easy?

“Yes, easy, easy!” he says, with a laugh. (Al Hamad is still most comfortable in Arabic, and took the written test in that language and the driver’s test in Arabic, too, with an interpreter in tow. He had to prove that he could read all road signs in English though.)

It was an accomplishment, and a baby step toward a new life in the US. Al Hamad, his wife, Wajed Al Khlifa, and their children only arrived here in February, after fleeing war in Syria. It was a nearly three-year journey, from when they left their house [since bombed] in the city of Homs and touched ground in Turlock, California, a rural city two hours east of San Francisco. They were picked up and resettled by the International Rescue Committee, which has an office in Turlock.

Now, after that long wait, life is full steam ahead. Two-year-old Mohamad is learning his first words in English and his three siblings, all girls, are in school, learning fast. Eight-year-old Arwa, the eldest daughter, is in fourth grade and boasted of passing a test the other day. “It was about multiplication. Easy, easy!” she says. 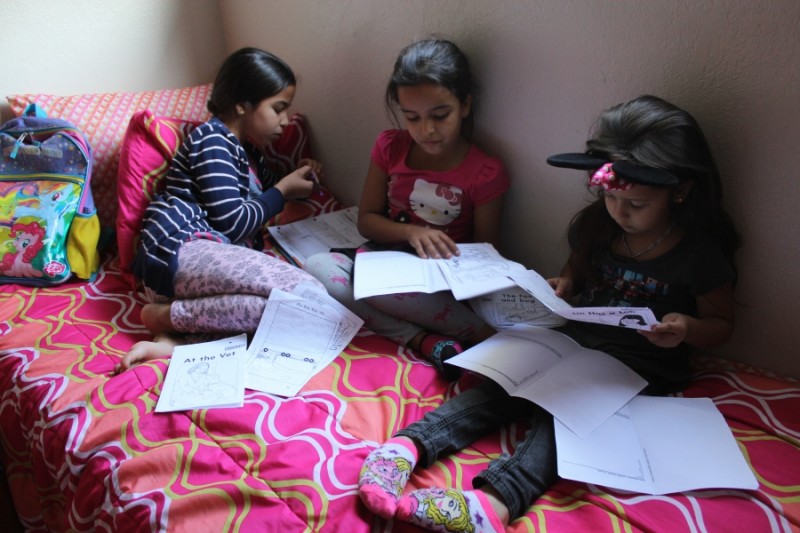 The parents also take English classes every morning. Their progress is slower. But learning the language is a priority, so much so that Al Hamad, 35, no longer works at a nearby halal slaughterhouse — a job he picked up within weeks of arrival — and is focusing on English. With no income for now, the family receives food stamps and other California state-funded public assistance. Al Hamad’s ultimate career goal? “I’d like to have a farm,” he says. “I dream to have a farm.”Cows, goats, chickens. Like he did back in Syria.

Meantime, the family’s friendships here deepen. The parents’ met most of their new friends at the local mosque. There’s Kiefa Aziz, a Palestinian American, who says she and Al Khlifa have become “best friends.” On a recent afternoon, Aziz helped Al Khlifa with shopping for the family’s first Thanksgiving Day meal. “I’ll show her the recipes,” Aziz says, who also helps care for Mohamad. 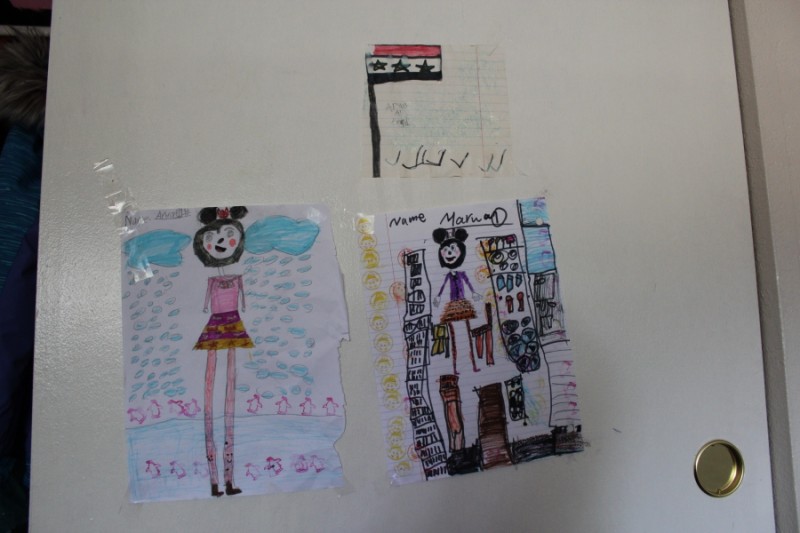 The childrens’ drawings in the bedroom of their new home in California. Arwa, 8, drew Syria's flag to “not forget where I'm from.” Credit: Monica Campbell. Used with PRI's permission

At the same time, Al Khlifa and Al Hamad are also learning about the harsh realities of America and its politics. They've kept up with the governors — now representing more than half of the US states — who oppose taking in Iraqi and Syrian refugees following the terrorist attacks in France based on worries that the refugees are not vetted enough.

The couple worries the pushback will slow their other relatives, including a brother and nephew, hoping to come to the United States next. “It’s going to be difficult,” says Al Khlifa. She now tells her family that, after Paris, it might take much longer to get here.

They also don’t understand the questioning now over security and refugees. The family’s refugee application process in Jordan was long. There were many interviews and background checks.

“They asked me questions for a year and half,” says Al Hamad. “Do you have tattoos, wounds on your body? When did your dad die? And your mom? Were you in the army? When did you serve? Where?” Al Hamad remembers arriving for one in-person interview with a US official in Jordan at 8 a.m. and leaving at 9 p.m. “There were long breaks, and then more questions,” says Al Hamad.

And since Paris, they feel a shift. Al Khlifa, who wears a hijab, says people stare at her when they wouldn’t before. “Since Paris, what happened in Paris, things changed,” she says.

“I hope this time will pass,” her husband says. “I hope for peace soon, in Syria, and all over the world.”