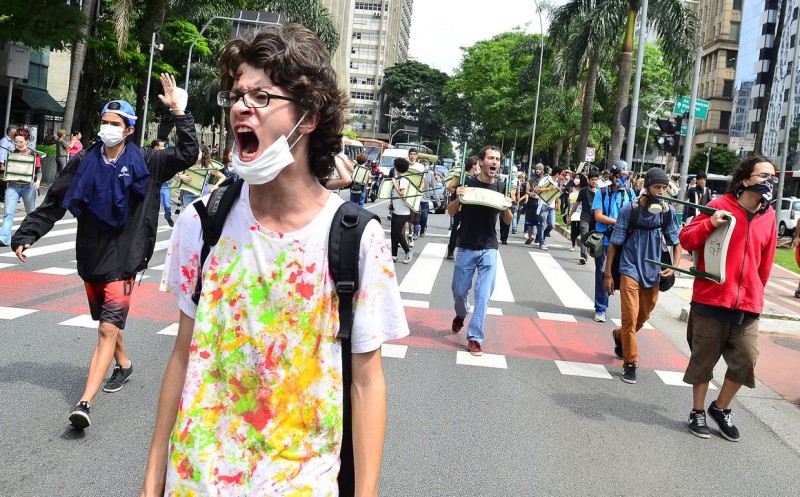 São Paulo's students movements appears to score a major victory, as the government backs down on its “reorganization” plan for schools. Photo: Agência Brasil CC 3.0.

After two months of protesting in the streets and occupying almost 200 schools throughout the state of São Paulo, Governor Geraldo Alckmin announced today he is postponing the state's reorganization plan until at least 2017. In what protesters are also hailing as a victory, Education Secretary Herman Voorwald (known in social media as Herman “Voldemort”) has resigned from office.

Under the state's “reorganization plan,” 43 percent [2] of the schools in Sao Paulo would have been required to offer only one of the three levels of education in the Brazilian system, instead of offering primary through secondary education all under the same roof.

The new policy would have necessitated the closure of 93 different schools across the state, and more than 300,000 students were expected to need to transfer to new schools.

Students who opposed the program claimed the changes were simply a disguised cut to education spending. The plan's opponents also faulted state officials for failing to hold wider and more public consultations with the education system's stakeholders, given the radical changes the “reorganization” would have required. 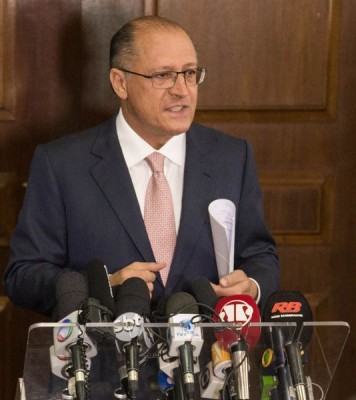 At a press conference today, December 4, Governor Alckmin said he “got the message from students and their families in relation to the plan,” adding:

Our decision is to postpone the reorganization and re-discuss it on a school-by-school basis, as well as with the community, the students, and, especially, with the parents.

Alckmin assures students will have guaranteed enrollment at their current schools for the 2016 school year (which in Brazil runs from March through December).

Education Secretary Voorwald's resignation [3] comes after a government review board concluded that he “failed to establish bridges of dialogue with the movement to demobilize the occupations.”

What else might have prompted the Governor's Office to capitulate to demonstrators? Early on December 4, the research institute Datafolha released the results of a poll showing Alckmin's popularity at a record low [4]. In the survey, 30 percent of the Governor's constituents rated his government as “bad or very bad,” with just 28 percent saying it is “good or very good.” Last year, following Alckmin's reelection, those figures were 48 percent and 13 percent, respectively.

The Facebook page “Don't Close my School,” which has been the student movement's main public channel of communication, posted a statement [5] claiming victory, though the group says it intends to continue its occupation of schools until the authorities agree to several immediate concessions: (1) the government's official newspaper of record must publish the Governor's order to suspend the “reorganization” plan; (2) all the student protesters currently in police custody must be released; and (3) there must be amnesty for any protesters charged with crimes committed as part of the occupation movement.

It is time to celebrate! For the second time in the recent history of the state of São Paulo, the youth bends a stubborn governor. Only we know how much we've fought to demoralize Alckmin finally and to persuade everyone to defeat the reorganization.

In 2016, we will keep on fighting to guarantee more rights and to defeat once and for all the project of reorganization. The courage and the strength that the students’ movement has shown is irreversible. We re-signified public schools, which now have a political and cultural life in consonance with the dreams and needs of the students and local communities. Never before have public schools been so occupied nor have they so well fulfilled their potential, as when they were under the control of the students.

Some protesters are still holding out for more. Demonstrators at at least one other school [6] in São Paulo told the newspaper O Estado de S. Paulo that they won't end their movement until the government's reorganization campaign is de facto canceled (rather than just postponed for a year).

In widely a shared post on Facebook, journalist and media activist Bruno Torturra argued [7] that Alckmin's words must be taken with a grain of salt:

Notice how he talked about the parents, not the students. This will be the new dialogue and his strongest weapon.

Whoever wants to know to where do the winds from the [govervor's residence] Bandeirantes Palace blow needs to get out of the internet and turn on the radio. That's where the official narrative and common sense of the paulista are broadcasted full-time.

This has been the tone for days. The parents are worried. The parents miss their children. They are afflicted when they see them being educated by “social movements”.

The government will empower new association of parents and will alienate the “radicalized”. He will pose as a republican citing the Pope…

School is out. When classes are back, he will have found out a way to hold the kids at home, outsourcing the repression to the family — always the family — that, now, can go back to the streets in peace, take selfies with the police and ask for [President Dilma Rousseff's] impeachment.

Write it down, Alckmin hasn't lost. He has done quite of check mate on the movement.

Eyes on the game board, kids.

Over the next several days, assemblies at occupied schools are planned where demonstrators will decide the movement's next steps.

A week of intense protests 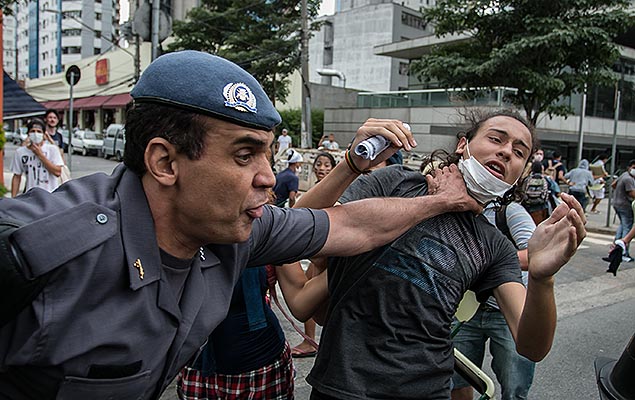 For two months, students have been protesting against the reorganization, and for at least three weeks they've occupied dozens of schools across the state. The struggle reached a turning point earlier this week, when independent media collective Jornalistas Livres (Free Journalists) [9] leaked a recording where Fernando Padula, the chief of staff of the state's Secretariat of Education, told school directors, “We will fight until the end and we will win. We will demoralize and disqualify the movement.”

Padula's statements appeared to show the authorities’ complete unwillingness to negotiate with the occupy movement, leading to a rapid escalation of protests. Police responded in kind. On December 3, for instance, protesters reported in a Facebook post that law enforcement officers arrested 14 people at a rally earlier that day.

A number of videos and photos of students being beaten and arrested have emerged online, like footage posted by the Internet collective Juventude às Ruas (Youth on the Streets) from a protest in São Paulo city center.

The same group posted a video of a student being carried upside-down by four police officers, as well as photos  [10]and videos of other arrests [11]:

Another video shows the exact moment when a police officer fired a bomb into the middle of a peaceful demonstration, while protesters sang “no violence.”